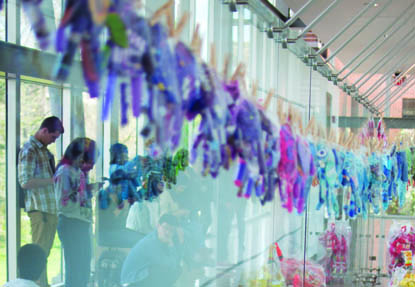 Lined up in the order of the color wheel, students from the art department walked with their TRASH-FORMATION installation across campus to be exhibited in Manzanita Hall.

The piece was inspired by this year’s freshmen read, Garbology: Our Dirty Affair with Trash by Edward Humes. The book tackled issues on how Americans utilize and discard the items in their daily lives, and how people can better dispose of their trash through recycling.

“What if we took a look at garbage as art?” said art education professor Edie Pistolesi, the project director. Two years ago, she was the coordinator of the Burning Wall Street installation that occupied the same space.

Students from Pistolesi’s art 100 class collected clean trash from their day-to-day activities to build the exhibit pieces. The students were split in groups by color on the traditional red, orange, yellow, green, blue and violet rainbow. While collecting the trash, students took keen notice of what kind of products represented their groups.

Only one student, Ali Zadah from Kuwait, was in the yellow group. He found the book eye-opening.

“The book was cool and different. I have never read a book like that before,” said Zadah, a civil engineer major. Zadah said he collected his trash, such as cigarettes boxes and other items for the project, from his local 7-Eleven.

“I love the idea that we can use trash as Art in the United States. We don’t do things like this in Kuwait. They should do this is Kuwait,” said Zadah.

In the exhibit, latex gloves filled with trash are hanging about the larger exhibits of on the floor. Pistolesi said the idea for the gloves came from the fact that our hands play an extensive role in polluting the environment.

“The students had to fill the gloves, but not stuff them like a turkey. They were actually using principles and elements of art and design to show unity through the colors and various shapes,” said Pistolesi. “They used line and learned about focal point. They had to learn and develop visual skills to make the gloves impressive.”

The art exhibit is an uncommon way to bring attention and awareness to issues of garbage destroying and polluting our environment. Though the exhibit was pleasant and unique to make, Pistolesi wanted to make the project a living experience for her freshman students where they were not afraid to ask someone for their bottle cap or any other item they were about to dispose of to use in their project.

Freshman Trina Salas, in the purple group, was shocked to see how great her artwork looks in Manzanita Hall. “I never would’ve thought my art would be displayed on campus. I made art out of gloves,” she said. “I didnt know you can make art out of trash.”

Freshman Dalia Espinosa, of the red group, was also pretty excited to see her contribution to the artwork displayed. “We all cooperated in collecting trash and stuffing the gloves.” Espinosa said. “Stuffing is the wrong word because we couldn’t really stuff. We had to organize with the art skills that we learned throughout the semester.”

Espinosa says that from this project, she takes with her that “everyone plays a big role in recycling and gathering trash,” because everyone makes trash.

“I really didn’t see the big picture. I couldn’t even imagine it,” said Espinosa. “Now seeing everything finished, it looks beautiful actually. It looks like a very loud statement.”