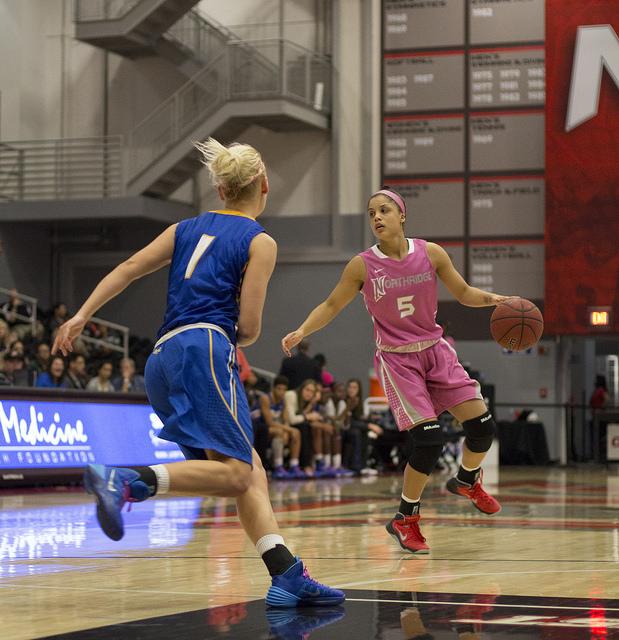 With 21 assists and effective offensive ball-sharing, CSUN kept a comfortable distance on Fullerton throughout the game, recovering from their loss to UC Irvine (14-13, 7-6 Big West) last week.

“When we do have chemistry and energy that’s when we click on the defensive end and it carries over to the offensive end,” said CSUN’s junior guard Cinnamon Lister who led her team with 25 points.

CSUN took an initial lead over Fullerton with Lister and fellow junior guard Ashlee Guay who, recovering from the tip off, each landed threes within the first two minutes of the opening half.

Fullerton would close on CSUN’s early lead, matching the Matadors 9-9 at 15:32, but would give it up later with shots from Guay and the close the half trailing 44-30.

Despite their 14 point lead over the Titans in the first half, CSUN head coach Jason Flowers said that the Matadors defense needed improvement.

“I don’t think we did a very good job in the first half of playing defense,” said Flowers. “I thought we gave up too many offensive rebounds.”

Fullerton would close within 20 points of the Matadors at the wire, with two threes landed in the final two minutes of the game.

Northridge’s shooting showed on the stats sheets, with a 53.8 percent field goal average and only following behind Fullerton in free throws with 80 percent to the Titans’ 82.1 percent.

Fullerton relied heavily on guard Alex Thomas, who led the game with 27 points and landed all but one of her 13 free throws.

Lister proved deadly from the 3-point line, landing a total of seven. Her shooting proved effective at keeping the Titans trailing on the scoreboard.

“They were sagging off and my teammates found me,” said Lister who had seven assists for the game.

Junior guard Janae Sharpe had seven assist for the game and scored 22 points.

UC Davis (12-14, 7-6 Big West) dropped Cal Poly from its shared first place spot with CSUN last night in a 77-69 win that it secured from the Mustangs with a layup and critical free throws at the wire.

The Matadors face UC Riverside Saturday (6-20, 2-11 Big West) in one of two their games left before the conference tournament March 11-15.

UC Riverside holds last place in conference and loss at home earlier in January to the Matadors 71-61.