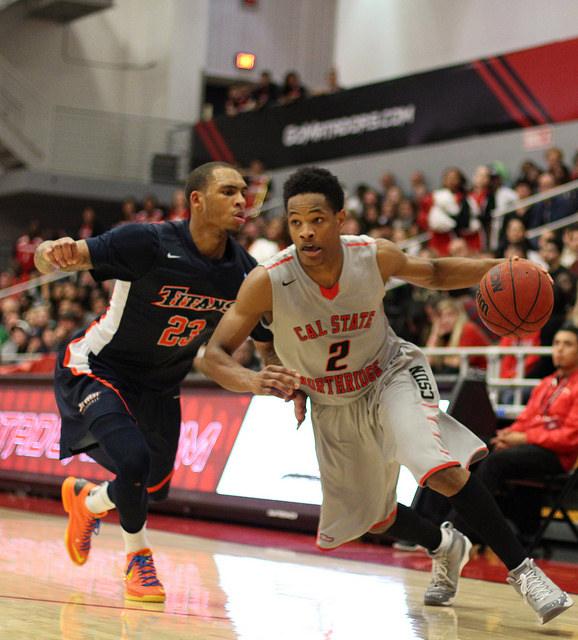 CSUN trailed the entire game but earned an opportunity to win the game in the final seconds. However, a jump shot by senior guard Josh Greene would not go down to give the Matadors the come-from-behind victory.

Junior Forward Stephen Maxwell led all scorers in the game with 25 points to go along with 12 rebounds while Greene added 13 points and two assists for the Matadors.

Northridge got off to a bad start, missing their first three field goal attempts and turning the ball over two times while the Titans went on a quick 4-0 run. Cal State Fullerton would stay ahead going on a 7-0 run to go up by 10 with the score at 14-4 with 14:40 remaining in the first half.

Greene scored 11 of his 13 points in the first half and helped the Matadors go on a 9-2 run as he hit three consecutive 3-pointers bringing the Titan’s lead down to seven points with 7:28 left in the half.

The Matadors would bring Cal State Fullerton’s lead down to as little as two points after a jump shot by junior forward J.J. Thomas went down with a little over four minutes left in the half, but it was not enough to take over the game.

The Titans shot well from the free throw line, hitting 10 of their 14 attempts including five with less than three minutes remaining in the half. Cal State Fullerton would finish the first half on top with the score at 46-37.

Heading into the second half the Matadors continued to trail with the Titans extending their nine point lead to as high as 11 points. CSUN would fight to get back in the game cutting the lead down to just two points once again with 9:12 left in the game after a 10-3 run and a jump shot by junior forward Stephan Hicks.

Maxwell led the Matadors with 17 of his 25 points coming in the second half, while Greene cooled off after a strong offensive game in the first half.

Despite being behind the entire game, the Matadors stayed close enough to have one last shot to win the game. Cal State Fullerton could not hit their free throws down the stretch to put the game away as the Matadors chipped away at the lead.

With just 15 seconds left in the game, sophomore guard Landon Drew hit a jumper to have the Titan lead down to just one point. After a foul by Hicks, junior guard Josh Gentry would miss two crucial free throws for the Titans. The ball would then go to Greene who missed a jump shot that would have given the Matadors the win.

Coach Reggie Theus blamed his team’s’ inability to play strong in both halves as the reason for the struggled on the road in an interview with Go Matadors.

“We went into halftime knowing that we were not getting the job done,” said Theus. “ It’s a matter of getting the team to play the entire 40 minutes.”

The Matadors will play one more game on the road against the UC Riverside Highlanders (8-19, 3-20 Big West) on Saturday at the SRC Arena before heading back home for the final game of the season.