‘The Graduate’ gets unzipped at the Plaza del Sol 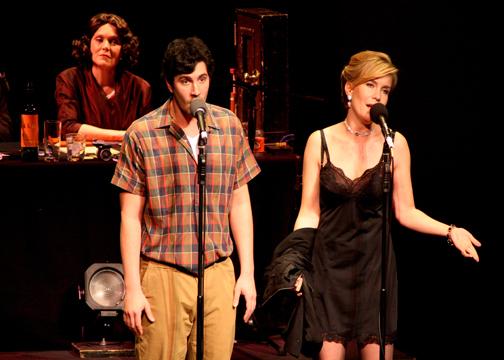 As traditional play and radio theatre are married in the LA Theatre Works’ interpretation of “The Graduate,” the ballad of seduction and disillusionment synthesizes into a highly entertaining and emotionally charged show.

“The Graduate” is a sixties relic percolating in the taboo relationship between a young Benjamin Braddock and a much older Mrs. Robinson, a relationship which he later comes to regret as he falls in love with her daughter Elaine. “The Graduate” movie, an adaptation of the 1963 novel written by Charles Webb, is an exploration into values and nonconformity set to the music of Simon and Garfunkel. The uncertainty of the era is fused with transformation, and the generational conflict comes across in the inherently old timey dramatization of radio theatre.

For the duration of the performance, the actors used stand-up mics facing the audience allowing viewers to slip into a more intimate and involved connection with the performers. Mrs. Robinson, played by Heidi Dippold, explains that this unique setup is, “so distilled in fashion, people can really hear words and some people really dig that.” The lack of an elaborate stage set encourages an audience that can chisel away at the sound effects and unpeel the scene layer by layer whether it’s the ice rattling against a whiskey glass, a cigarette being lit with a satisfying crackle, the rotary phone clicking with that polished fifties twang or the gritty unzipping of a dress. All the sounds effects are projected with actual objects from a table visible to the audience channeling a more focused and raw aural experience.

Although the translation of “The Graduate” might forgo some of the most iconic scenes popularized by the movie, it replaces them with equally entertaining and fitting scenarios. Likewise, performers such as Brian Tichnell playing Benjamin Braddock inject part of their own personalities into the character. Robinson (Heidi Dippold) has a voice that drunkenly flounders across the stage with a lush brandied rasp while a gawky Benjamin Braddock (Brian Tichnell) exhibits a new sort of charm muddled with confusion and persistence.
The simplicity of the set allows for an intensified focus of the performers, the dialogue and the sounds. Though this format might not work for everyone, the lack of distractions enhances the experience and navigates all the senses in the right direction.