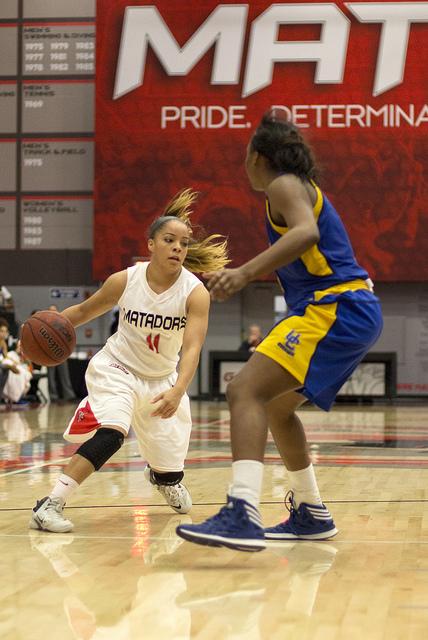 The Matadors (15-14, 11-4 Big West) secured a 77-75 win over the UC Riverside Highlanders (6-24, 2-12 Big West) despite struggling from defensive gaps and offensive errors early on Saturday at the Matadome.

Falling behind late in the first half, CSUN rallied in the last five minutes of the game to take the win and clinch a share of the Big West title for the first time in school history, also securing a No. 1 seed in the upcoming Big West Tournament.

The Matadors came out strong in the beginning, with junior guard Cinnamon Lister landing two threes in the first minute of game that established an initial lead for CSUN.

Northridge peaked from outside shots from junior guard Ashlee Guay and jump shots in the paint from center Camille Mahlknecht in the first half and established a 10-point lead over the Highlanders at the 8:50 mark of the first half, leading 25-15.

CSUN would give up its lead as the half closed, with the Highlanders benefitting from their tough defense within the key that would have them leading 37-36 at the buzzer.

Riverside would further its advantage over CSUN opening the second half with a 7-0 run, taking a lead that the Matadors would chase until the last five minutes of the half.

Sharpe carried the Matadors’ offense during their deficit in the second half against Irvine with hard drives to the basket.

“She kept us close until some other people got involved,” said Flowers. “It could have been an even bigger deficit if it wasn’t for her.”

Starting at 8:42 in the half, CSUN would land three 3-pointers for 9-4 run against the Highlanders that would bring them within five points of UC Riverside.

Guay would make a tip-in out of a quick offensive rebound that started as a jump shot from Sharpe, putting the Matadors within one point of UC Riverside at 68-67 with 4:18 in the final half.

Riverside would trade the lead with an exchange of layup and jump shots, but would eventually fall behind when Guay landed a three and Sharpe sank two from the charity stripe.

With 15 seconds left, the Highlanders guard and team-points leader Brittany Crain would land a 3-pointer putting her team within one point of CSUN at 76-75, but personal fouls and solid free throw shooting from the Matadors would keep Riverside from the win.

“I think the story of the night is that this group, when it was really important, found a way to get it done,” said  head coach Jason Flowers. “They didn’t pout, they didn’t put their heads down, they didn’t quit.”

CSUN shot 39.3 percent from the field, compared to Riverside’s 46.8 percent, and landed half of their 3-pointers to the Highlanders 53.8 percent.

Sharpe led the game with 24 points, landing all of her 10 free throws and two threes, and was followed by teammate Guay who tallied 21 points for the game.

CSUN will play their final conference game away at the Long Beach State 49ers (15-13, 7-7 Big West) March 6 before heading to the conference tournament. The Matadors previously defeated the 49ers in January at the Matadome 77-54.