Latinos will pass whites as majority ethnicity in California in March 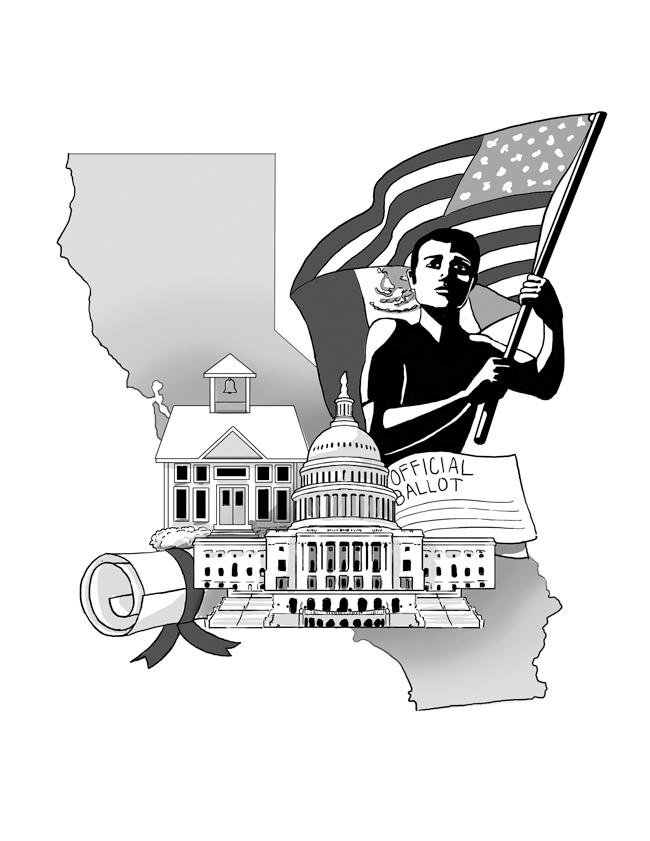 In the wake of the ethnic studies debacle at Cal State Los Angeles, educators believe the forecasted change in California’s demographic profile represents a significant event and could become a catalyst for debate, not only in diversity reform throughout all levels of education, but in hiring practices.

In Gov. Jerry Brown’s 2014-2015 budget summary, Latinos were projected to eclipse whites as the plurality, or largest racial/ethnic group, in the state by a margin of 39 percent to 38.8 percent, respectively, this month.

The Department of Finance previously projected the Latino and white populations would draw even by the middle of 2013, but a decline in birth rates caused a slight deviation in the estimate.

While the shift in demographics is not unique — states like New Mexico and Hawaii have a Latino and Asian plurality, respectively —  Mary Pardo, Chicano studies department chair, believes the change is significant for a state as populous and diverse as California.

“I think it changes the nature of how we think about our state given we have a different composition in the ethnic profile,” Pardo said. “We have to recognize that there are cultural and certainly economic differences in the majority of the Latino population.”

Melina Abdullah, Pan-African studies chair at CSULA, agrees the change is significant as it is a more realistic representation of global demographics.

“It’s more reflective of the global society we live in,” Abdullah said. “We have been conditioned to think the white majority is normal, but if we look globally, the majority is people of color.”

Reinforcement of Ethnic Studies in Higher Education
For Abdullah, who championed the CSULA ethnic studies GE requirement movement that saw a modified proposal passed on Feb. 25, the change in demographics represents another opportunity to stress the importance of diversity and ethnic studies classes in higher education.

“The battle that was won at Cal State LA on Tuesday was only a partial victory,” Abdullah said. “While we celebrate that victory, we’d also like an actual ethnic studies requirement and the increased number in the state underscores the importance of that.”

While CSUN does not specifically require an ethnic studies class be taken to satisfy the comparative cultures requirement, Pardo believes the cross-listing of courses from ethnic studies departments allows for greater exposure and availability.

“I always think our model is the best, of course, because what we’ve done is incorporate GE into every category, so we have courses that may be selected to meet a GE requirement, except in the sciences,” Pardo said. “We also have a major and a double major so students may be exposed to ethnic studies issues in their GE courses, as well as take courses in our major or double major. We think that is really the best way to go.”

Although Pardo is satisfied with the requirements at CSUN, she is still a supporter of the movement at CSULA due to the importance and value of ethnic studies curriculum.

“I think it’s a great idea because some students may never select one of the ethnic studies courses that are an option in the GE list of courses,” Pardo said. “There are different ways to go about informing students about ethnicity and we have to explore all our options.”

Having seen the benefits of ethnic studies firsthand at CSUN, Pardo believes other institutions need to take into account the value to students of offering such courses, not just the costs.

“It certainly makes the concerns visible rather than it being in the margin and it’s important that it gets debated,” Pardo said. “It certainly is a contentious issue because there are always thoughts about resources and competition for resources, but it should be seen as enriching the curriculum.”

Implications for the K-12 System
While the state’s demographic is only shifting now, Latinos have been a majority in California’s public school system since 2010 and have increased to 52.7 percent during the 2012-13 school, according to the California Department of Education.

“Every study has signaled the importance of ethnic studies,” Abdullah said. “The idea that we should have an ethnic studies requirement becomes even more urgent as we have an increasing number of people of color in the state.”

While California seems more open-minded with regard to discussing ethnic studies in each level of education, states like Arizona have passed legislation like HB 2281, which effectively ended the Mexican-American studies program in the Tucson Unified School District by threatening to cut funding.

“In Arizona, they saw it as a threat to American values because their definition of American values is very narrow,” Pardo said. “We’ll still have those people, but we have now a wider range and younger generation of people with more cosmopolitan perspective on the profile of our country.”

Like Pardo, Abdullah is hopeful that the attention put on diversity in California can make progress in encouraging ethnic studies in K-12.

“This could spark a national dialogue,” Abdullah said. “What we see in the Arizona example is a failure on behalf of the state to see the importance in the value of ethnic studies.”

The value Abdullah spoke of was presented in the film “Precious Knowledge,” which chronicled the final years of the Mexican-American studies program in Tucson.

The program graduated 93 percent and saw 85 percent of its enrollees attend college compared to the 48 percent average graduation rate of Latinos in Arizona.

While the incorporation of ethnic studies did lead to improvement in academic success for Latinos, Gina Masequesmay, chair of Asian-American studies at CSUN, believes that ethnic studies are integral in understanding how the world truly is.

“It’s important that we live in a diverse world and you want to understand the racial dynamic, the gender dynamic and the politics of sexuality that are going on,” Masequesmay said. “It will make a more humane citizen of the world, instead of just protecting your own interests at the expense of others. You see how you are implicated in the system of social injustice.”

Abdullah agreed with Masequesmay and also believes the benefits are not limited to traditionally underrepresented ethnic groups.

Addressing the Individual Needs of the Latino Plurality
While more emphasis is placed on incorporating ethnic studies throughout all levels of education, Christina Ayala-Alcantar, associate chair of Chicana/o studies at CSUN, believes educators also need to better understand the individual needs of Latinos when discussing reform in order to better foster an environment of academic success for them.

“One of the major problems we have is we act as if groups are homogeneous people,” Ayala-Alcantar said. “We need to do a better assessment and have a better understanding of how we are not meeting the educational needs of this population.”

Ayala-Alcantar believes the ethnic studies debate, which was not supported by the CSULA Chicano studies program, illustrates the difference in opinion and background among members of the group.

“It highlights the point that we’re a very diverse group,” Ayala-Alcantar said. “Not all Latinos are in support of the ethnic studies or even know what it means to be a Chicano.”

Ayala-Alcantar believes it is integral for educators to be cognizant of the experiences of their students to best understand what each student needs as opposed to generalizing to help them as a group.

“There’s a portion that is immigrant based, so their needs are different than say my daughter, who is a middle-class Chicana,” Ayala-Alcantar said. “We need to be aware of those differences so we can help all of these different types of Latino students to thrive academically.”

Implications for Educational Hiring Practices
In addition to incorporating ethnic studies into each level of education, Pardo believes institutions can improve by hiring applicants with knowledge of the students they are going to be teaching.

“We can make sure people are prepared with a broader sense of history, and the background of the students they are serving is certainly an element,” Pardo said. “What’s really important is getting people of color into these positions by making sure they are prepared and informed. So, that’s where I think that ethnic studies courses and the integration of history of different people comes into play and moves us away from the eurocentric focus.”

While the applicant pool would expand with improvements in education, Abdullah is convinced there are already enough qualified candidates.

“It’s not as much as finding qualified applicants as people would like to think,” Abdullah said. “A lot of this comes from not understanding the value that faculty of color bring to both the K-12 system and higher education system.”

Abdullah’s own experiences led her to believe students’ success can be tied to how they relate to their instructor.

“For me, a lot students say I’m the first black woman they’ve had as a professor and they were able to identify with me,” Abdullah said. “We don’t talk about that value or what it means when faculty mirror the experiences of their students.”

As diverse as the student demographics are at CSUN, the Office of Institutional Research shows the faculty profile has not adapted like K-12 has and still reflects traditional hiring practices.

“It’s happening more in the K-12 system than higher education,” Ayala-Alcantar said. “If you look here are CSUN, the majority of professors are white males.”

While CSUN’s faculty profile does not accurately reflect the students it serves, Abdullah says the problem is reflected throughout the CSU system.

“People of color are really underrepresented,” Abdullah said. “On my campus alone, of the almost 600 tenured or tenure-track faculty members, there are only 17 black faculty. The numbers for latinos are about double, but still a huge underrepresentation when talking about 90 percent students of color.”

While Pardo understands the challenges the traditionally underserved face in the hiring process, she is still hopeful that talking about the issues can lead to some reform, especially on campus.

“We definitely have resistance, but it’s important to get the dialogue going and hopefully we’ll move forward with some changes,” Pardo said. “As we look at the demographic profile here at Northridge, which we know is 10 percent ‘Hispanic’ faculty, we’re a Hispanic-serving institution, so that’s something we definitely need to change.”

Even if debating the issues is the only outcome of the demographic shift, Pardo believes good can still come out of it.

“It is a struggle,” Pardo said. “It is conflictual and we won’t always reach consensus. But with each conflict, consciousness is raised.