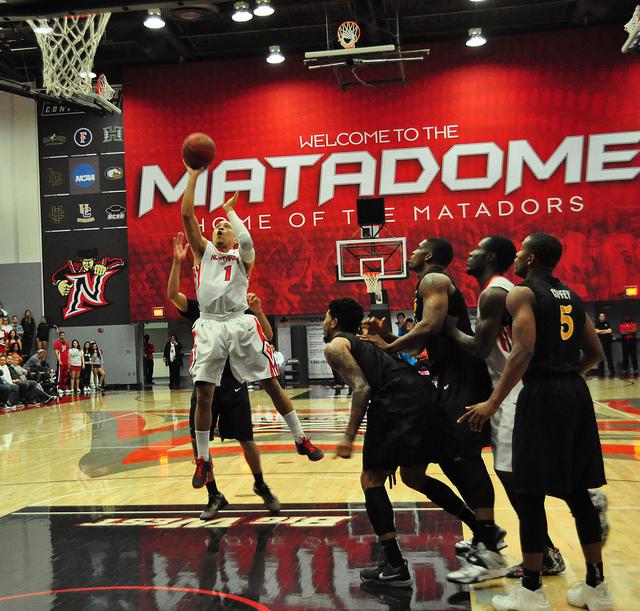 Senior Guard Josh Greene, the holder of seven matador records, was able to defeat the 49ers in his final career regular season game. Greene had not defeated Long Beach State in nine contests over his four year career at CSUN, according to Go Matadors.

The Matadors entered the contest tied for sixth place with the Cal State University Fullerton Titans in the conference standings, while the 49ers (13-15, 9-6) were third in the conference. CSUN last defeated the 49ers five years ago.

The game started with a 5-0 run from the 49ers, before the teams exchanged leads throughout the first half. With less than 4 minutes in the first half, CSUN took a 33-32 lead off of an Aaron Parks jumper, and never trailed after.

Matador sophomore Guard Landon Drew provided a spark off of the bench in the first half by having six points and four assists in 12 minutes of play during the first half.

The 49er’s big bodies on the inside were key for many post shots and put backs in the first half.

Long Beach State guard Branford Jones scored 13 of his 17 points in the first half, including three 3-pointers on just as many attempts, however it was not enough to overcome a 38-43 Matador lead at halftime.

In the second half, Matador sophomore center Tre Hale-Edmerson answered the challenge of the 49er big man. He had two of his 15 total points on a breakaway, one-handed dunk to give CSUN a 77-70 advantage.

The Matadors were then able to push their lead to nine points, before a 7-0 run by the 49ers cut CSUN’s lead to two points. 49er guard Mike Caffey was responsible for hitting the 3-point shot which made it a 79-77 game in favor of CSUN. Caffey would finish the game with 19 points and 7 assists.

With less than two minutes remaining, Greene drove the lane and knocked down a mid-range jumper to give the Matadors a 83-77 lead. Greene and Hale-Edmerson both hit crucial free throws to pad a CSUN lead with under a minute left.

Long Beach countered Matador free throws with a 3-pointer from guard Tyler Lamb on two occasions within the final minute. Despite Lamb’s best efforts from distance, the Matador lead was too much for the 49ers to overcome.

Leading 87-83, Greene sealed the victory with consecutive trips to the free throw line, sandwiching a Lamb 3-pointer miss. 91-83 was the score as time expired, despite Lamb leading the 49ers with a 22-point outing.

Greene added 15 points and was one of four Matadors to finish the night with double digit scoring.

Defense was the key for CSUN as they held LBST to 42 percent shooting from the field over the contest.

Hale-Edmerson added three of his five blocks in the second half. His defensive effort also added three steals and eight boards over the entire game.

“Today’s game was really about the defense,” Coach Theus told reporters.”Our defense was extremely solid from start to finish.”

Despite two early fouls, junior guard Stephan Hicks had a career high 28 points along with seven boards in only 28 minutes of action. Hicks said he will continue to be aggressive heading into tournament play.

“(I’ll) do what I do best,” Hicks said, referring to his scoring ability.

Theus said it is important for Hicks to consistently want to aggressively score the ball.

“I think he could have had five or six 30 point games, this season,” Theus said of Hicks. “Tonight I saw a glimpse of where I think he can go.”

Overall the victory was a strong team win, and a positive note to end the season on, Theus said. “What this means for us, we beat all the top teams in the conference,” he said after the win, “Under any circumstances we have the chance to beat anyone.”

Seniors Greene and center Dominique Youman both agreed the win was a special ending to their regular season.

“Definitely special, its my last game, so I wanted to go out with a win.” Youman said after his final regular season game.

Greene was excited for the win as he looks forward to the postseason.

“Winning this game gave us momentum to feel good going into the tournament,” Greene said after his final regular season game.

Senior night began with Greene’s mother and sisters singing the national anthem and ended with Greene and Youman honored with a mid-court as they received a standing ovation from celebrating fans.

Although he said it was not the most talented group he has ever coached, Theus said it was one of the best groups of guys he had ever been around.The first year coach said a win against Long Beach is the type of win which can change the culture of the CSUN basketball program.

“The word on the street is that the culture has changed here,” Theus said on the culture change. “It doesn’t happen overnight. It’s going to take even more work next year. But it’s moving in the right direction.”

Greene agreed he had witnessed a culture change in the final year of his CSUN career, because of the newfound expectations for winning.

“The more you win, the more people are going to come out to watch you play,” Greene said. “This win was definitely big for our program.”