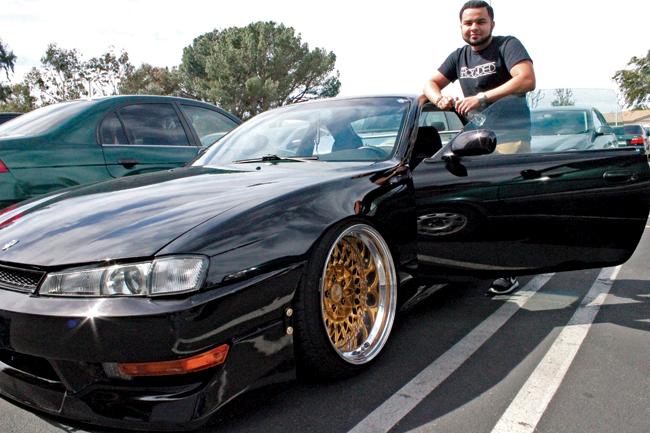 Time shall no longer be idly wasted waiting for parking. Instead of pouring energy into the parking lot rage, a glance toward the surrounding cars in parking structures and lots can turn into a free mini car exhibit. CSUN parking provides itself as a natural showroom for some pretty cool wheels.

Music industry major Wes Col was looking for the perfect car when his father suggested the Toyota Celica GT. Cole instantly fell in love with the car and started his search for it online. After months of coming across cars that were in bad condition, he found his ride at a dealership in Bellflower.

“It was like a tropical paradise,” Cole said. “I searched for it in the sea of cars and when I found it in the crowd I said ‘Oh my God.’”

The thunderstorm grey 2004 Toyota Celica GT, with its cool, sleek lines, exemplifies an esthetic that is hard to overlook. This model holds the color of the original Corvette and is based off the Canadian “Tsunami Edition,” a rare version of the Celica that was discontinued in 2005.

“I like to think it’s lucky,” Cole said about his car that was built on St. Patricks day.

The Celica is Cole’s first car he has bought on his own. He was able to compromise with his father on using part of his tuition money to cover the roughly $12,000 expense of buying and customizing this car, since he did not plan on going far away for college.

Cole proudly turned his headlights on when asked about the cool customization specs his car possessed. The blue-tinted HID Xenon 8000k headlights create a brighter intensity than the average headlights. Along with the headlights, Cole pointed out that he would like to add subwoofers, to enhance the bass sound response of the JBL speakers that came with the car. Sound is important to this future music industry professional.

Mechanical engineering student, Omid Nessar, was inspired by his brother to turn his 1997 Nissan 240 SX into a weekend track-racing car. After seeing his brother lower several cars, Nessar promised himself he would join the club and do the same with his first whip.

This cherry black Nissan has received a full makeover in the two years that it has been in the hands of 19-year-old Nessar, who happens to also work in a body shop. Most of the changes were made to mimic the look of a race car.

The wheels on the other hand are not only an enhancement to the appearance of the car look but are also fully capable of taking this Nissan to the next level on the race track. In order to afford such expensive wheels, Nessar negotiated a sponsorship with the performance wheel manufacturer Avant Garde.

In exchange for the wheels, Nessar exhibits his Nissan at car shows such as Slam Society, AutoCon and Weekfest. This month Nessar’s beauty is featured on the front page of “Super Street,” a magazine dedicated to performance enhanced and personalized compact cars.

Pineda’s favorite spec on his azure blue car is the hood scoop, a protruding duct that is mounted on the top of the hood allowing conduction of air directly to the engine compartments.

“I like it because you can see the hood scoop move while you drive because it is attached to the engine,” Pineda said.

Three years ago Pineda was on his way to buy the special edition vehicle, the only Mustang that has the hoop scoop. After a two hour ride to the dealership Pineda was forced to ride in the passenger seat as his brother drove his new car home. Pineda could not drive stick shift.

With the help of YouTube tutorials and his brother’s careful instructions, Pineda overcame the obstacle in one week and was able to drive his new car.

When life gets stressful Josh Abramovitz, 23, retreats with his 2013 Scion FR-S to the nearby canyons to let off steam. He enjoys driving through the Stunt Road canyon, a winding paved road with tight curves, near the Topanga canyon.

“It is definitely therapeutic,” said Abramovitz, a music industry studies junior. “And it is quite fun to carve corners in a car that can easily rival much more expensive sports cars in the handling department.”

Abramovitz was sold 10 months ago on the pearl white, light-weight, 200 horsepower FR-S and its slick shifting six speed manual transmission. He pointed out that this Scion’s center of gravity is lower than the Porsche Caymen. Which means the mass of the FR-S is closer to the ground ensuring a greater balance when turning the canyon corner than the Porsche, he said.

“The great thing about this car is you can have fun revving it out to the red line, 7,400 RPM, and you can still be within the speed limits.”

Abramowitz said it is more about experiencing the full power of the car rather than going over the legal limits.

In the future he wants to buy a new exhaust and have the car chipped. This would serve the function of modifying ECU, the car’s computer, to aid in outputting even more horsepower, he said. That is when the time will come to test the car’s full potential on the race track.