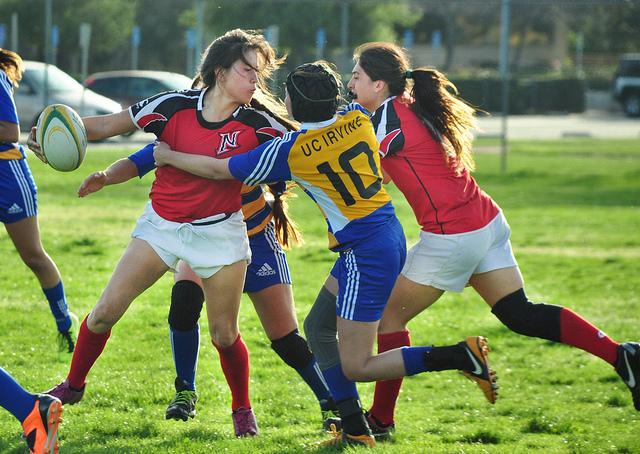 In its first home match of the season, CSUN improved to 3-0 with a victory over the UC Irvine squad 36-10.

Northridge struggled early in the game, allowing Irvine backs to get some big runs before they were brought down short of the in-goal area.

“It was a rough beginning for us, but we just really had a gut check,” said Ciarra Waters-Mullen, forwards captain.  “We’re used to just coming out scoring.  In this game they really came at us hard so we really had to step it up.”

CSUN would not break through until the halfway mark of the first half, when they were finally able to break a big play with a Northridge back breaking for the first try of the game.  With another try, CSUN took a 14 point lead towards the end of the half.

“I think we did a good job getting in at wide,” said Gillian Chance, backs captain and CSUN women’s rugby president and founder.  “We tend to attack where they are weak, and some of their weak spots that they weren’t tackling out wide.  So we started feeding the ball out and attacking the space.”

Northridge cruised in the second half, only allowing 10 points to Irvine en route to their 36-10 win.  CSUN has held opponents to ten points or fewer in all of its games this season.

Despite a strong defensive effort, CSUN was penalized for falling into rucks in the first half, a problem they were able to adjust to later in the game.

In a ruck, players have to stay on their feet in a battle for the ball to prevent potentially dangerous plays

“We saw the problem and I thought we did a great job of fixing that in the second half,” Chance said.

Waters-Mullen felt the team could have performed better on offense.

“We definitely could have done better,” Waters-Mullen said.  “We like to have girls on support, when girls get on our breakaway we kind of slipped on that a little bit.”

CSUN will now prepare for a matchup with rival and perennial championship contender Long Beach State, whom Northridge is tied with for first place in Southern California.  The winner of the matchup will advance to Nationals in Division II play.

The team has scouted Long Beach, and feels they will be prepared against their attack.

We noticed is they use a lot of their fullback,  they use them alot and bring them out wide,” Chance said. “We’re gonna cover a lot more and make sure we cover out wide.”