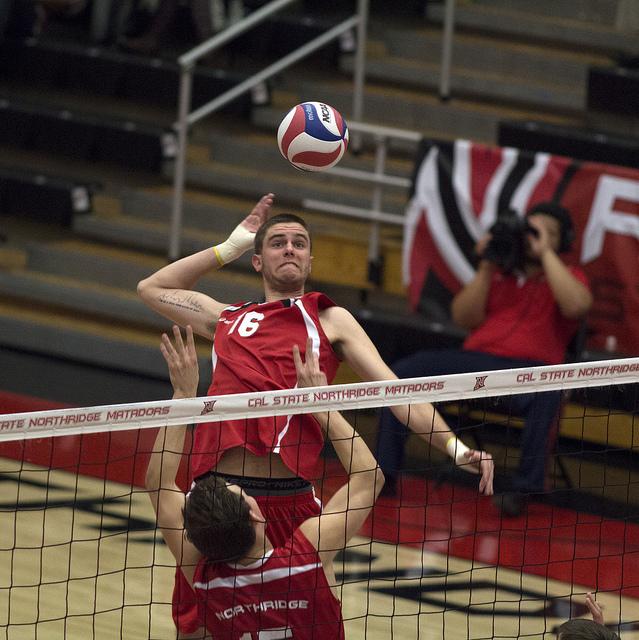 Holt dominated the match with a career-high 32 kills on a .393 hitting percentage, but his efforts were not enough as Cougars played with minimal errors, taking the last set by a seven point margin with only one attacking error.

Head coach Jeff Campbell was satisfied with his team’s effort against the second best team in the nation despite the loss, especially Holt’s performance.

“He was as good as any outside hitter in this league tonight,” Campbell said.  “The whole team played hard, and you can see that out there.”

While BYU star senior outside hitter Taylor Sander was held to only 13 kills in 25 attacks, freshman opposite hitter Tim Dobbert had his own career-high of 15 kills on a .429 hitting clip.  Dobbert did most of his damage in the first set, striking seven kills in BYU’s 25-22 first set victory.

The Matadors came out and played the Cougars competitively, hanging within two to three points for most of the first set.  CSUN tied the set at 14-14 and at 17 apiece, but could not grab the lead as BYU cruised behind Dobbert and Sander’s set one performances.

Holt’s play powered the Matadors with 10 kills in set two alone.  Holt knocked in kills to tie the set at eight  apiece, then s mashed a few more to keep CSUN in the lead as late as 18-17.

The Matadors missed a big opportunity to create separation six points later with a 21-20 lead when they miscommunicated on a set up for an attack. Junior middle blocker Greg Faulkner jumped into the air but never took a swing at the ball as he was looking for a teammate, and allowed the ball to drop harmlessly on CSUN’s court.

“There were a lot of issues here and there were certain people are getting set and we try to get in a good position and we weren’t able to,” Faulkner said after the match. Despite the botched play, Faulkner finished with seven kills in 13 total attacks, his eighth straight game hitting over .300.

BYU would grab the momentum and win the set behind a block from Sander and powerful kills from sophomore middle blocker Michael Hatch.

Despite committing 15 service errors by the end of set three, CSUN would survive to extend the match to a fourth set with a thrilling series of plays.  Trailing 21-14, the match looked to be headed to the same ending as the teams’ last matchup on Jan. 10, when CSUN played well in a sweep but fell in the last set 25-15.

The Matadors mounted a big rally mostly behind Cougar errors, pulling within 22-20.  CSUN would complete the rally as they tied BYU 23-23 on a kill from Holt. Heading into extra points, freshman outside hitter Damani Lenore came off the bench and provided a spark for his team.  Lenore smashed a big serve, a shot that ended with a Matador kill a few hits later.  Lenore’s strong serve and weak Cougar return gave CSUN a 25-24 lead.

Back to serve on the following point, Lenore stroked the potential set-clinching kill just outside of the corner of BYU’s court, extending the set.  After Hatch and Sander tied the set at 26-26 with kills, Holt bashed two kills in a row to give CSUN its first set over the Cougars in three matches.

CSUN was unable to ride their new found momentum into set four, as the Cougars turned in an efficient performance to win the match.

Four more service errors contributed to a 14-10 deficit for the Matadors midway through the fourth set.  The Cougars hit .429 in the set, but allowed CSUN to tie the set at 18 apiece with receiving errors from Sander and junior outside hitter Josue Rivera. Another service error by Lenore however would give BYU the lead for good, as they cruised and won the last six points of the set to win 25-18.

Campbell acknowledged his team’s passing and serving consistency issues, but felt his team had one of their best outings of the season.

“The numbers don’t tell the whole story,” Campbell said.  “We competed probably at the highest level of volleyball we’ve been competing at this year…  (If) we just get a little more consistent we can start beating these teams.”