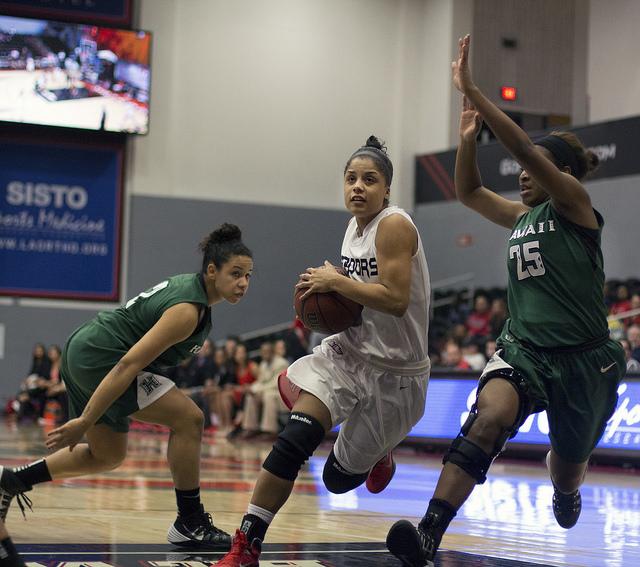 The Matadors secured the top seed in the Big West conference, and will face the lowest remaining seed coming out of the first two rounds in Long Beach. Photo Credit: Trevor Stamp / Senior Staff

With the final round of Big West matchups completed Saturday, the CSUN men (15-17, 7-9 Big West) slid into the fifth seed and will play the fourth-seed Hawai’i Rainbow Warriors (20-10, 9-7 Big West) Thursday at 8:30 p.m. at the Honda Center in the Big West tournament quarterfinals.

Having reached their first Big West Tournament in three seasons, CSUN will face a Hawai’i team that beat them by 14 points in their most recent matchup at the Stan Sheriff Center Feb. 1.  CSUN defeated the Rainbow Warriors by a single point in a 79-78 victory on Jan. 11 at the Matadome.

The women’s team clinched the Big West championship with a victory over the Long Beach State 49ers 52-49 on Thursday, and will be the No. 1 seed in the Big West tournament.  They will have a bye and advance to the semifinals Friday at noon at the Honda Center, where they will face the lowest remaining seed coming out of the first two rounds at the Walter Pyramid at Long Beach State Tuesday and Wednesday.

Although the Matadors dominated conference play, they struggled in losses to the UC Davis Aggies (14-15, 9-7 Big West) at the Matadome and Hawai’i Rainbow Wahine (16-12, 10-6 Big West) at the Stan Sheriff Center.  CSUN was also swept in the season series with the UC Irvine Anteaters (16-14, 9-7 Big West), as Irvine junior guard Camille Buckley tore up the Matador defense with an average of 29.5 points in  the Anteater victories.

Make sure to check out Thursday’s sports page for a complete preview of the Big West Tournament.