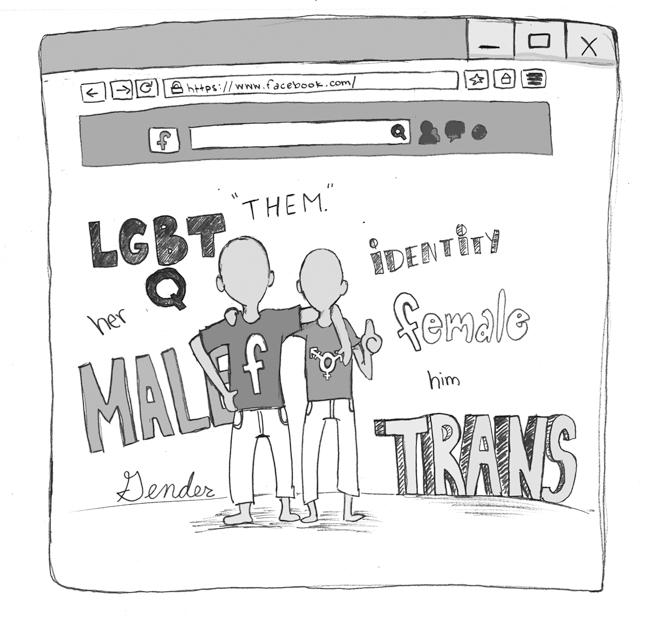 Male, female, or “custom”? Facebook now offers the option to customize gender identity on profiles, including the option for gender neutral pronouns to accommodate the transgender and genderqueer communities.

“When you come to Facebook to connect with the people, causes, and organizations you care about, we want you to feel comfortable being your true, authentic self,” Facebook said on its Diversity page.

Last year, the Human Rights Campaign surveyed 10,000 lesbian, gay, bisexual and transgender youth. They found that 10 percent of respondents chose “other” or wrote in their own gender terms with which they identify.

Transgender people, sometimes referred to as trans, are people whose gender identity is different from the social expectations of the physical sex they were born with, according to the definition provided by UC Berkeley’s Gender Equity Resource Center. For example, a biological male with a feminine gender identity may identify as a woman.

A person that identifies as genderqueer identifies as neither man nor woman, according to the Gender Equity Resource Center. Their identity is either between or beyond the binary man-woman gender system.

“The whole point is validating identities,” said Cadence Valentine, a peer mentor in the USU’s Pride Center. “How can you validate someone’s identity if you don’t even give them the option to express their gender identity in their profiles?”

Brielle Harrison, a Facebook software engineer that worked on the project, is undergoing gender transformation herself. At the launch of the of new options, Harrison changed her gender from female to transwoman.

“There’s going to be a lot of people for whom this is going to mean nothing, but for the few it does impact, it means the world,” Harrison told the Associated Press.

Ja’nita Fisher,  junior business management major, is one of the many people that this change does not impact.  However she supports the change.

“I think it’s a good thing, now people have the freedom to tell people who they really are,” Fisher said. “It’s really surprising that it has taken this long for mainstream society to acknowledge and accept the transgender community.”

Sarina Loeb, coordinator of the Pride Center and LGBTQ initiatives, thinks it’s a huge step for Facebook to provide a place where transgender and genderqueer people can identify themselves how they are, outside of the binary male-female system.

“Especially in today’s day and age so many people look to social media as a way to express themselves or be themselves and be true to who they are,” Loeb said.

A noted problem with Facebook  was the gender pronouns used on profiles. For example, “Write a birthday wish on his/her timeline.” It’s well meaning, but at the same time, it completely negates someone’s identity,” Valentine said.

She also said that the use of gender pronouns has the potential to unintentionally “out” trans users.

Now, Facebook lets users choose the pronouns they would like to use on their profile – him, her, or them.

In April 2013, Associated Students passed a resolution to allow transgender students to use their preferred name on all CSUN related documents including student ID cards, class registration, and health records at the Klotz Student Health Center.

“It’s so students aren’t faced with a situation when their going into a classroom and day after day they have a teacher taking roll and have a name called that isn’t theirs,” Valentine said.

The name change process is not only time consuming, but expensive, which makes it not an option for a lot of trans identifying students, Loeb said.

“I had a student tell me the other day that they were worried about graduation – about walking across the stage and having the name that was read not be who they are. Or get the diploma in the mail and not want to put it on the wall because that name doesn’t reflect who they are,” Loeb said. “It’s not just a novelty, it will really change and impact peoples’ life.”

Despite the resolution, the university has yet to implement the preferred name options.

Loeb said that they are also advocating for more gender inclusive bathroom options on campus, as many trans identifying students don’t feel comfortable using the mens or womens restroom.