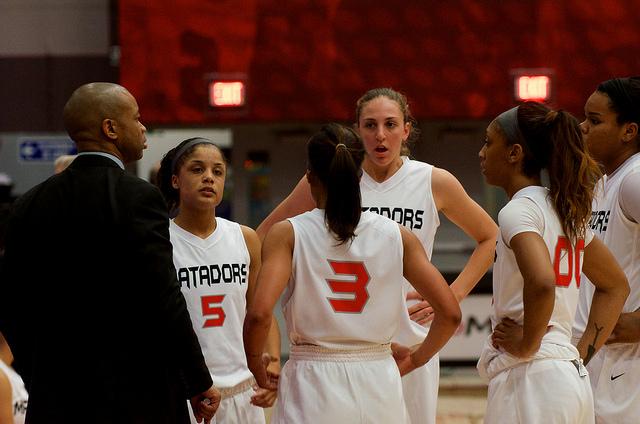 The Matadors closed the 2013-2014 regular season with a several awards in the Big West that included Coach of the Year, Best Defensive Player, and a historic program-first grab for Player of the Year.

Junior guard Ashlee Guay, who started all thirty of the Matadors’ games, was named Player of the Year and credited for her effective offense. Guay ended the regular season sixth in conference for average points-per-game (17.0) and sixth for the season (15.7). Guay also finished third with 2.8 3-pointers per game, including a record 8 three-pointers made against the UC Irvine Anteaters on Jan. 23.

Leading the Matadors’ defense, junior center Camille Mahlknecht was named CSUN’s first ever Defensive Player of the Year. Mahlknecht led CSUN and the conference with 3.6 blocks per game, and 3.1 for the season, ranking eleventh in Division I.  Mahlknecht picked up her play in conference matchups, collecting four or more blocks seven times against Big West opponents.

Head coach Jason Flowers took his second Big West Coach of the Year award for leading CSUN to its first outright conference title. Flowers turned around a 4-10 start with a 12-4 record in the Big West including a season sweep of the defending Big West champion Cal Poly Mustangs.

CSUN, who will be the No. 1 seed at the Big West Tournament for the first time in school history, will host a semifinal March 14 at noon at the Honda Center.  The Matadors will face the lowest-remaining seed from the first two rounds of the Tournament in Long Beach Tuesday and Wednesday.