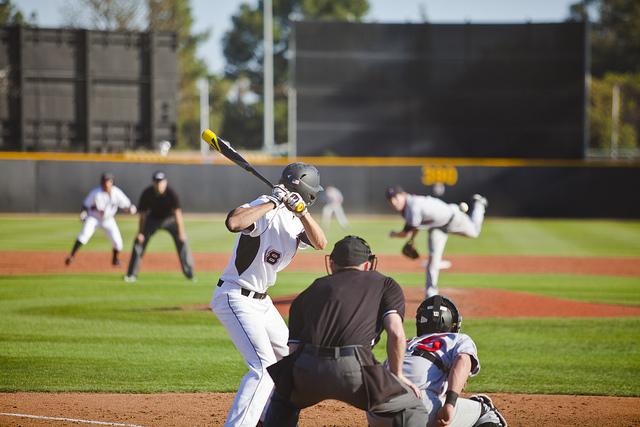 The Matadors (7-12) were looking to open up their three-game series with a win as they hosted the West Virginia (9-5) Mountaineers at Matador Field. Despite a late push in the ninth inning, CSUN could not come out with the victory, falling 5-4 to the Mountaineers.

The bottom of the ninth proved to be tense, as the Matadors loaded the bases twice. With two outs, Raslowsky singled and put the score at 5-4.  With the bases loaded and junior utility player Nick Blaser at the plate, the Matadors were in a position to win the game. But they fell short, as Blaser ended the game striking out.

Head coach Greg Moore said the Matador’s defense could use some work.

“If we knock a ball down or we pick it then it’s a whole different inning,” said Moore. “We just needed to play catch, we didn’t get that done and they capitalized on it to their credit.”

The first three innings belonged to the pitchers with neither team able to get a man on base until the fourth inning. West Virginia struck first with a hit by senior outfielder Jacob Rice, hitting the ball down the middle for a single.

The Mountaineers would go on to score after junior centerfielder Cameron O’Brien hit the ball down the middle to bring in senior Ryan McBroom for the run. A stolen base by O’Brien and an error by Cal State Northridge after a throw to third base could not be completed by sophomore infielder Nicolas Osuna led to more runs scored by West Virginia to lead 3-0 in the fourth inning.

CSUN came alive in the fourth inning as they got runners on base with a double hit by junior infielder Ryan Raslowsky, who finished the game 3-for-5 at the plate.

“We’re starting to get the confidence that we need to put up the runs,” said Raslowsky. “I think we just need to get that one big hit. We’re getting guys on base, we need to have that one clutch hit and I think we’ll be good.”

A hit by Blaser brought in Raslowsky for the Matador’s first run of the game. The bases were loaded for the Matadors, but they could not add more runs at the bottom of the fourth inning.

In the top of the fifth inning, the Mountaineers continued where they left off with senior first baseman Ryan McBroom getting on base, but CSUN was able to come out of the top of the inning preventing West Virginia from adding more runs.

A ball hit by sophomore first baseman William Colantono sent to center field would help put the Matadors in a position to score. The Matadors would add to their score with Colantono scoring off of a wild pitch to put their deficit at 3-2.

Junior left-handed starter Jerry Keel (0-4) struck out two batters in 6.1 innings pitched and was credited with the loss.

With two more games left against West Virginia, Moore praised the team’s offense, saying it was some of the best the team has played. However, he did mention they had room for improvement elsewhere.

“There small things, minor things,” Moore said. “It’s pitch by pitch, doing some things differently with the baseball at the plate as far as the pitchers and then we just need to stay on top of the ball.”

The Matadors will host West Virginia for game three of the four game series today at 3 p.m. at Matador Field.