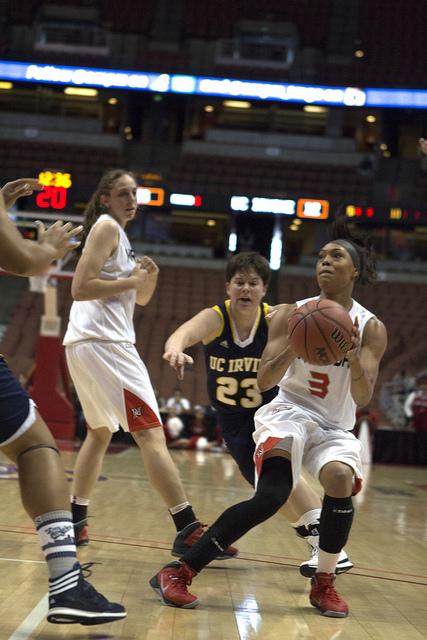 ANAHEIM – Utilizing a devastating strategy against Irvine’s proven offense, the Matadors secured their first and most critical win 78-60 this season against the Anteaters March 14, to secure a spot in the Big West Championship game Saturday.

CSUN’s plan against Irvine’s offense proved effective in keeping the Anteaters’ number-one shooter Camille Buckley from doing any serious damage on the scoreboard.

“I give a lot of credit to Cal State Northridge for how they guarded us,” said Anteaters head coach Doug Oliver. “They guarded [Buckley] at a high level, we just didn’t react to it accordingly.”

Head coach Jason Flowers’ game plan against Buckley proved effective in that for the 32 minutes the forward played, she only managed to land three of 12 attempted field goals and 10 of 13 free throws for the game.

“I thought if we had a big [player] on her first and doubled with a [small player] it wouldn’t be effective,” said Flowers. “If we could put someone on her with her size, it could cause problems.”

This approach shut down the 6’1 forward, who landed 16 points, 10 of which were free throws,  against the Matadors, compared to her earlier matches against CSUN this season where she put down 31 on Jan. 23. And 28 on Feb. 22.

With Irvine’s offensive game under Matador control, CSUN made solid off of turnovers gained from holding to their defensive assignments.

From the tipoff CSUN obtained the initial lead, trading off later with Irvine until the Matadors broke away with threes and layups with around ten minutes left in the half.

Trailing 36-28 coming into the second half, the Anteaters were unable to counter the Matadors’ defense and attempted to close in on CSUN’s lead by switching to long shots, but didn’t land anything meaningful.

CSUN would put substantial distance over Irvine, taking advantage of every opening and error the Anteaters made

Junior Guard Lister put down two 3-pointers with a minute of each other at the wire that only went to further frustrate the Anteaters who were already been trailing by around 20 points.

Shortly after Lister put down two threes back to back, CSUN junior guard Ashlee Guay grabbed a steal and drove it all the way for a layup to put the Matadors 21 points over Irvine.

“We Looked at film, we watched film a lot,” said Guay. “We applied it in practice and had scenarios, our coaches are really good at giving us what we need to do and letting us apply it.”

The Matadors will now face off against the Cal Poly Mustangs, who defeated the University of Hawai’i 66-52 following CSUN’s match against Irvine.

Cal Poly led conference part way through the season until suffering a three-game losing streak in February that allowed CSUN to take the lead.

CSUN will play for the Championship against Cal Poly San Luis Obispo Saturday at 1 p.m. at the Honda Center in Anaheim.