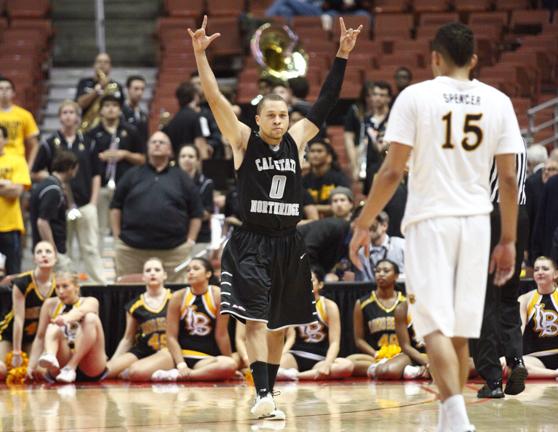 ANAHEIM – The Matadors did it again.

And again, they escaped.

Junior guard/forward Stephan Hicks led the Matadors in scoring with 27 points and 13-13 from the free-throw line. Senior guard Josh Greene had another strong game with 21 points.

Junior guard Mike Caffey led the way for the 49ers with 19 points.

With CSUN up 44-32 to start the second half, the Matador offense came to a grinding halt, allowing the 49ers to complete a 17-3 run off a Caffey 3-pointer.

But CSUN kept driving the lane and getting fouled, making six straight free throws to take a 61-59 lead.

The 49ers then took the lead back after two back-to-back 3-pointers by redshirt freshman Branford Jones, putting Long Beach up 65-61.

The two teams exchanged blows like prize fighters down the stretch, but CSUN prevailed due to their exceptional foul shooting. They shot a blistering 87.5 percent from the charity stripe, while Long Beach only converted on 60 percent of their attempts.

“When the game became a free-throw shooting contest, the game was over,” Theus said.

Greene had a monster first half, scoring 19 of his 21 total points in that frame. But he picked up his fourth foul early in second half and had to sit out.

With Greene sidelined due to foul trouble, Hicks came out firing and scored 21 of his 27 points in the second half alone.

“I think once I got my first bucket in the second half, it got easier for me,” Hicks said. “Things started going my way, so I decided to turn it up a notch.”

CSUN struggled to get going early, and found themselves down 7-2. After a quick timeout, the Matadors pulled to within two, but junior guard Tyler Lamb drained a wide-open 3-pointer, giving the 49ers a five-point lead.

Greene’s 3-pointer tied the game at 11, but Long Beach went a 5-0 run after Spencer drove for a layup.

CSUN then went on another one of their timely runs, scoring 14 straight points to take a 27-18 lead. The 49ers were down by as many as 15 points in the half.

Greene credited his teammates with picking up the slack while he was unavailable for most of the second half.

“They’re my brothers,” Greene said. “We’re all a family. I just became a good cheerleader on the side and as long as I can be out there being vocal and they can still hear my voice, that’s still leadership.”

The Matadors will face the Cal Poly Mustangs in the Big West Championship game Saturday night at 7:30 p.m. in the Honda Center.

“Tournament basketball fits their style because the game gets more physical and the game becomes more of a half-court game,” Theus said about Cal Poly. “This is a game that if we can’t fight through contact, we can’t win the game.”