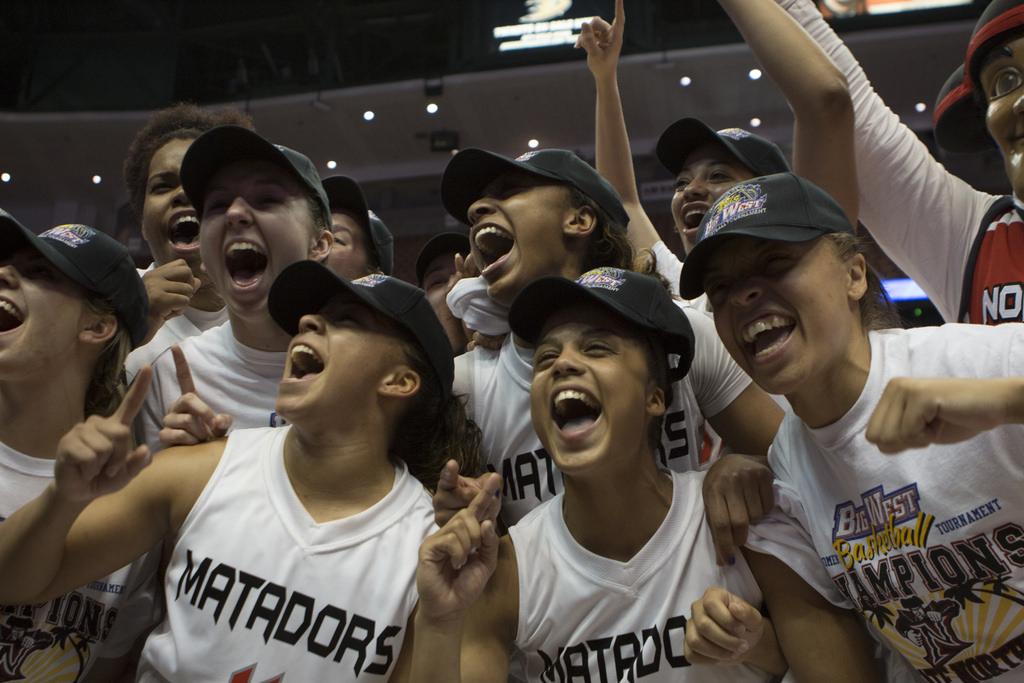 It was a long last minute.

Trailing by 13 down the wire, the Cal Poly Mustangs began to foul in aim of stalling what was inevitable.

They were close only moments before, having rallied with five minutes left to dig themselves out of a 20-point deficit with a 10-0 run, and come within a few shots of CSUN.

But the Matadors quickly adjusted to Cal Poly’s new offensive threat and put a stop to the barrage of 3-pointers being dealt by Mustang junior guard Arianna Elegado.

And though Cal Poly pushed hard to the last second, there wasn’t much they could do to stop the buzzer from granting the Matadors a 73-58 wire-to-wire win.

“I am humbled and proud to be the coach of fourteen young women who have worked their butts off all year,” said CSUN’s head coach Jason Flowers.

Having developed an effective defense during the season that allowed their key shooters to shine on the scoreboard, CSUN was able to comeback from their slump early in the season and go on to take the conference championship for the first time in their history.

“We matured this year,” said CSUN junior guard Ashlee Guay. “Even though (the season) started out super hard, we wouldn’t be prepared to win a championship today.”

CSUN entered conference play against UC Davis Jan. 9 with a 4-10 record. The Matadors would take the initial game against the Aggies but would lose the next one to the Hawai’i Rainbow Wahine.

As the season progressed, CSUN established winning streaks. It gave up games to UC Davis and the UC Irvine Anteaters, but would eventually take first place in conference and in the tournament.

In their semifinal game Friday against UC Irvine, an opponent that had beaten them in both matchups during the season, Flowers modified his defensive strategy to check the Anteaters.

Facing an offense that was reliant on forward Camille Buckley, the Matadors adjusted by placing players of equal size on her. The strategy thwarted any significant damage from the conference’s leading shooter and helped the Matadors secure the win.

The Matadors showed a habit of being able to adapt quickly to an opponent’s offense this season.

Having defeated Cal Poly in both regular conference games, CSUN figured out how to effectively counter Mustang 6’5 center Molly Schlemer who stood fourth in conference for shooting.

In their first game against each other this season, Schlemer put down 22 points against CSUN, but in the next match, would only go for nine points due to a defensive adjustment from the Matadors.

While battling for the championship, Mahlknecht, along with sophomore center Bernadette Fong, was able to keep Schlemer from inflicting any serious damage.

“I panicked, I didn’t have a lot of poise,” said Schlemer who only managed nine points for the game. “Their defense against me is probably the best in the conference.”

In the semi-final game against the conference’s third-seeded team Hawai’i, the day before, the center put down 29 points.

Having been shutout of the key for the majority of the game by CSUN, Cal Poly adjusted to the Matadors’ defensive plan and began to close in with threes.

CSUN responded to Cal Poly’s long-range game by assigning the 5’10 sophomore guard Breeyon Alexander to Elegado and obstructed any more significant damage being done from outside the arc.

The Matadors held to their defensive assignments, only giving Cal Poly one layup for the remaining five minutes of the game.

“I thought we came up with a good game plan,” said Elegado. “We felt really good before the game.”

Playing as a team, CSUN benefitted from 15 team assists, with an even spread of points between Guay (25) and junior guard Janae Sharpe (17) that was supplemented with shots from Fong in the key (nine) and long shots from junior guard Cinnamon Lister (nine).

Northridge only gave four turnovers to Cal Poly, but suffered with eight blocks.

Guay, who earned Big West Player of the Year, led CSUN with 25 points, landing half of her shots and dished six assists for the game. Guay was countered by Elegado who put down 23.

Having dethroned last year’s champions, CSUN will move on to the NCAA Tournament and will find out today who they will play in the tournament bracket.

The first round of the NCAA Tournament is scheduled for March 22-23 and CSUN is projected to play Stanford in a regional at UCLA’s Pauley Pavilion.

“It’s been a process throughout the season and the year, one I will never forget,” said Sharpe.