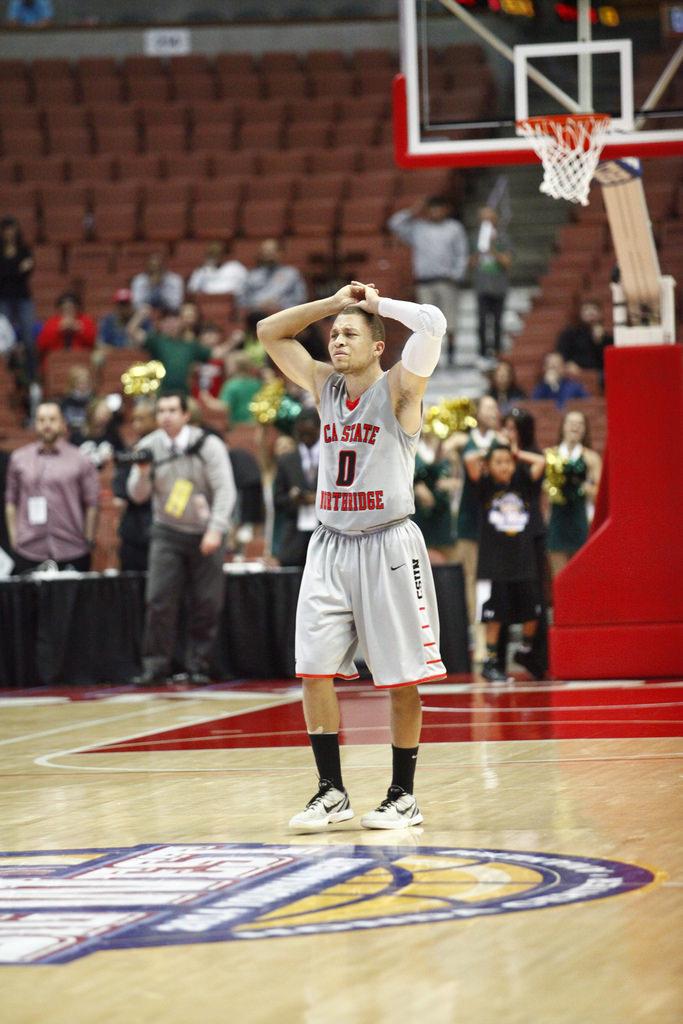 Josh Greene, center in frustration after a costly turnover resulting a 61-59 loss over Cal Poly on Saturday, March 15, 2014 at the Honda Center in Anaheim, Calif. (David J. Hawkins/PhotoEditor)

Only the prince did not come with with a glass slipper, which for the Matadors, would have been the Big West Tournament trophy and a bid to the NCAA tournament.

Junior forward Stephen Maxwell led the offensive charge for CSUN with 18 points while senior forward Chris Eversley had 18 points for the Mustangs.

Down by only one point at 60-59, sophomore forward/center Tre Hale-Edmerson made a move toward the basket and made a jump hook. But he ran over a Cal Poly defender in the process, prompting a referee to call an offensive foul and wipe away CSUN’s go-ahead basket with four seconds left in the game.

“Sometimes the calls go against you, sometimes they don’t,” Theus said. “That’s how it goes sometimes. It’s unfortunate.”

Senior guard Kyle Odister was immediately fouled on the next possession and made his first free throw. But he missed the second, giving the Matadors a chance to get one last look at the basket.

Maxwell rebounded the ball and looked for an outlet pass. He threw it to freshman junior forward J.J. Thomas who was still inside the Cal Poly three-point line. Thomas was unable to get a shot off as the final buzzer sounded.

Theus said the plan for the final play was for Greene to break free and receive a pass, but that never transpired.

“I thought Josh (got) a running start,” Theus said. “Max didn’t see him. Thus, in my opinion, he threw it to the wrong guy, and we didn’t get a shot off. I thought Josh was open. He could’ve gave him the ball.”

The Matadors went up 59-55 when Maxwell made a basket with 1:32 left in the game. After a pair of free throws by sophomore swingman David Nwaba, the Mustangs could themselves only down by three.

A missed 3-point attempt by Greene led to a scrum for a loose ball. Cal Poly was awarded the ball with the possession arrow in their favor.

Then with 33.7 seconds left, freshman guard Ridge Shipley drained a 3-pointer from the top of the key to put the Mustangs up 60-59, forcing a Northridge timeout.

“I thought they played an excellent game, well-coached game,” Theus said about Cal Poly. “They made the shots down the stretch.”

The Matadors let a double-digit first-half lead get away from them for the third straight game. They led by as many as 11 points early, but the Mustangs closed to within four after back-to-back 3-pointers by Shipley and Odister brought Cal Poly’s halftime deficit to 29-25.

After a Cal Poly timeout early in the second half, they scored six unanswered points to get their first lead of 31-29. The game was back and forth after that, and had nine ties and seven lead changes overall.

The Mustangs started the game slow from the field, but ended the game shooting a respectable 45.1 percent, and 59.1 percent in the second half.

The Matadors, however, were a ghastly 33.3 percent from the field for the game.

While Greene and junior guard/forward Stephan Hicks had strong offensive performances in their first two games of the tournament, they only shot a combined 8-for-27 from the field against Cal Poly.

“I had a lot of easy buckets that I usually make, but I didn’t make it tonight,” Hicks said.

Greene was in tears after the final horn went off, clearly disappointed about the loss.

“It’s tough because we fought all year,” Greene said. “Each game to get up to this point was a grind-it-out battle, and we just didn’t come up with the win.”

The loss marks the end of a season in which the Matadors exceeded expectations. They brought in a brand new coach in Theus and incorporated seven new players.

CSUN also improved on last year’s 14-17 record, which was not good enough to get them to the Big West tournament.

Even after a heartbreaking loss, Theus was already looking forward to what his roster could do next season.  CSUN will be welcoming four transfers, including 6-10 sophomore center Kevin Johnson from Seton Hall and 6-10 senior forward Devonte Elliott from St. Johns.

“Everybody’s coming back for this team except Josh and (senior center Dominique Youmans),” Theus said. “That motivation should kick start us into next year.”