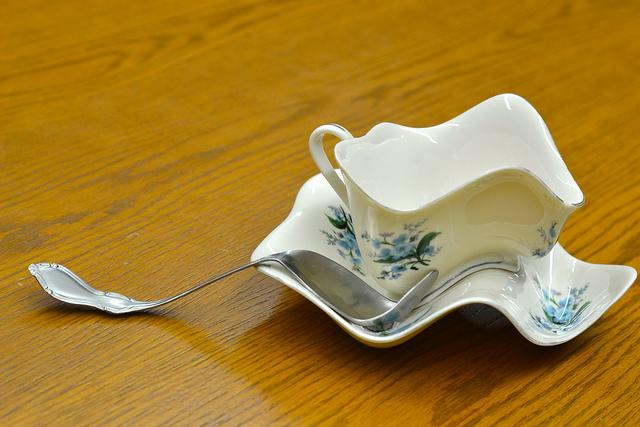 As a gift to the CSUN community, the teacup and salt and pepper shakers originated from Peter Norton, creator of the computer software Norton Antivirus, who commissioned an artist and distribute the pieces to his friends. Photo credit by Victoria Becerril

Tea cups, silver sets, and unusual items, including locks of hair and even sex toys can all be found in CSUN’s Special Collection and Archives.

Located on the second floor of the Oviatt Library, one can find numerous informational research pieces from books, periodical collections, diaries, maps and manuscripts, to photographs, audio and other various special items.

Though the doors are locked, the treasures within can be accessed by students and staff with a simple knock.

The Special Collections and Archives was formed in 1973 to provide a home for the rare artifacts, which now includes over 35,000 items and 150 manuscripts.

“The majority of items in the department, especially archival materials, have been donated over the past several decades,” said Jarosz who has been the special collections and archives librarian since 2011.

The collections and archives consist of numerous bodies of work including religion, music, American literature, theater, motion pictures and human sexuality, which can be accessed by students, faculty and others in the library catalog.

Jarosz said the library has funds available for purchasing rare book collections as well as maintaining what the department already has. Donations to the Special Collections and Archives come from different organizations, staff and students.

Jaquelynn Herrera, senior child development and psychology double major, was one many students aware of the special collections and archives.

“I went for a quick tour of the room during training for University Ambassadors, but I have not been in there since,” said Herrera.

Herrera was mindful of the department having rare and delicate items mentioning books, diaries and CSUN newspapers.

The collection of newspapers Herrera mentioned, were previous Daily Sundial issues displayed just outside of the room.

Herrera was surprised by the list of items people have donated to the collections department.

The Homosexual Information Center, a non-profit organization based in Hollywood aimed at informing the public about homosexuality, donated a gay greeting card collection. The collection is comprised of 33 gay Christmas and Valentine greeting cards donated to the library in 2007.

Daily News morgue files of the Bus Stop Campaign that took place in 1976 were also donated to the library. The files, which include court documents, were donated in the 1980s by the Daily News.

A collection that includes paper records, photographic material and video recordings of Rodolfo F. Acuña, who was the first professor in the Chicana/o studies, formerly Mexican-American studies department at CSUN, was also donated to the library in 1987 and 2003.

The oldest available book in their collection is P.H. Ricord’s Letter on Syphilis, which was published in 1854 in Philadelphia.

Exhibits are also part of the library’s collections, and many of them are displayed both in and outside the room.

Currently displayed just outside the special collections and archives section until July 25 is the C.K. and Teresa Tseng Exhibit Gallery “In Protest: The Shifting Paradigms of Collective and Social Action. The exhibit displays items from the library’s collections documenting various social action developments such as the American Civil Rights Movement from the 20th century.

Because the special collections and archives contain so many unique items, it begs to ask which items are inquired about most by students or others visiting the library.

“It changes a bit from semester to semester, depending on what courses are being taught on campus,” Jarosz said.

Jarosz added that the archives on the Jewish Federation Council of Greater Los Angeles has been accessed a lot recently, along with other documents pertaining to Los Angeles’ history.

Educators from outside of the country also come to CSUN specifically to look at the collections and archives at the library.

Not only are the archives useful to students and faculty on campus, but also to people from other countries such as Australia, China, the Netherlands and Poland, according to Jarosz.

Chris Farias, freshman film production major, was aware of the library having special collections and archives, but was unaware of where it was located. He thought it might be in the fourth floor of the library.

Farias said he never thought the library would have adult magazines in their collections, thinking it was mainly about books and documents.

“I’m not too shocked because people write papers and essays on all sorts of topics,” Guiterrez said. “Playboy magazines could be used to display how women are seen as objects.”

Though some of the items people have tried to donate to the collections and archives come off as shocking, the Oviatt’s Special Collections and Archives is a bona-fide goldmine for students seeking factual information.