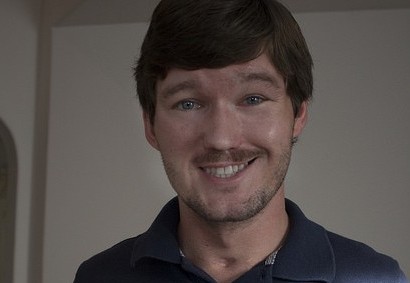 Adam Stelmach holds up a photo of when he was in a coma after his accident that left him with a tramuatic brain injury. Photo credit by Trevor Stamp

In a room filled with elderly individuals undergoing physical therapy, the youngest patient of the crowd, Adam Stelmach, sits toward the back of the room, switching from one workout machine, to the next.

When slowly walking over to the abdominal machine, the 26-year-old CSUN student, struggles to hold onto the handle with his right arm. Yet, although his fingers are unable to fully grasp the handle, he easily masters the machine, starting the weight lift at 80 lbs.

After a few repetitions, and the obvious sign of fatigue, Adam does not quit, as he boosts the weight to 95 lbs. All the while, his right hand and right foot constantly shake.

“Everyday is a good day,” Adam said, when undergoing his sessions of physical therapy at the Brown Center at CSUN.

Around 11 p.m. that night, Adam made “a choice” and plunged 40 ft. from the top level of a parking structure in Valencia, Calif. At the barely legal age of 21, Adam suffered a fall that left him with severe facial fractures and a Traumatic Brain Injury (TBI).

Adam worked as a bartender at the BJ’s Restaurant and Brewhouse located in the Valencia Town Center Shopping plaza. Although he wasn’t on shift that night, he was present in support of a breast cancer fundraiser and had “a little bit too much to drink.”

Adam’s friends had agreed to drive him home, but while attempting to slide down a stair rail, he lost his balance and fell from the fourth level of the parking structure.

“Imagine, at 11 p.m. the phone rings and the first thing they tell you is, ‘You have to get to the emergency room,’” Alex said.

When paramedics were called to the scene, they confessed to Alex that they had brought a body bag, as there was no chance that anyone could have survived that kind of fall.

The Centers for Disease Control and prevention reports that in 2010, there were 2.5 million traumatic brain injury incidents in the United States.

Although Adam got a second chance at life, he was not the exception to the statistics.

Now, almost six years later after the incident, Adam strives to better himself in every way possible, and to help others under similar situations.

“He always has a positive attitude. It’s something that I truly admire about him,” said Jonathan Tate, 23, kinesiology major and Adam’s weekly therapist.

“Statistically, I should be dead,” said Adam, who agrees that having experienced such a fall, and not breaking any arms or legs, is nothing short of a miracle.

After the fall, paramedics rushed him to Henry Mayo Newhall Memorial Hospital, where Adam was immediately induced into a medical coma. Due to the facial fracture and swelling of the brain, part of his skull had to be removed to control the swelling.

According to the CDC, a TBI is known to occur when an individual receives a “bump, blow or jolt to the head or a penetrating head injury that disrupts the normal function of the brain.”

After three weeks, Adam awoke. He was transferred to Northridge Hospital Medical Center, where he would be undergoing several surgeries, treatment and therapy for the next three years.

“All of them said that Adam had found that will to not give up,” Alex said.

But Adam remembers those three years as the darkest and most difficult years of his life.

“My family was an awesome support on a daily basis… I couldn’t have done it without them, without anyone, really,” Adam said.

When Adam fell, the left side of his head hit the floor, causing damage to that side of the brain.

Due to the TBI, Adam had trouble speaking, thinking critically and the entire right side of his body was paralyzed for a month.

“My first concern was if anyone else had been hurt. Did I bring anyone else down with me?” Adam said.

In disbelief of the incident, after becoming aware that he had been the only one affected, Adam’s mentality changed drastically.

“I came very close to committing suicide. I was in a very dark place for a very long time,” Adam said. “I knew that the only way I could get better was if I changed that.”

Adam accepted his fate and the consequences that came with the fall and quickly started undergoing therapy and became glued to it, he said.

The one thing Adam did promise himself was to be able to drive stick shift again.

“I would tell my hand, ‘you have to get better so you can drive, OK?'” Adam said.

Adam has taught himself to do most of his regular activities with his left hand, but is still undergoing therapy to get his right side up to speed.

“He loves (therapy). He’s never said no,” said Gerardo Samayoa, 24, Adam’s aquatic therapist, who as a kinesiology major helps Adam out at the Brown Center.

Before the accident, Adam had been attending College of the Canyons, where he was studying to get his Associate Degree. At the time, all Adam wanted was to get his AA and move to Las Vegas to be a bartender, Alex said.

After several years of physical therapy, Adam went back to college to finish his AA and to choose a career path in sociology.

“Thousands of people helped me out when I needed it most, so I decided to give back,” said Adam, who chose to major in Social Welfare when transferring to CSUN. “Every year, on the anniversary of the fall, my mom and I go back to the hospitals and give thanks to those who helped me.”

Due to the struggle that Adam and his family went through, Alex wrote a book based off of the journals that his wife kept. The book titled, “Adam Reborn: A Family Guide to Surviving a Traumatic Brain Injury,” was written to give parents and families support.

Adam has been invited to speak at the Mt. St. Mary’s College and also at the 2014 TBI Conference in Washington D.C., next month.