Despite odds stacked against them, CSUN matches up well with USC 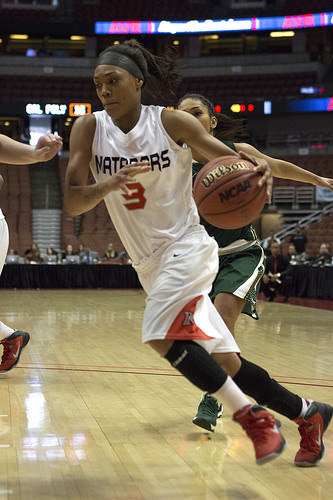 The Matadors have turned a bad start this season into a matchup up against one of the best teams in the country in the NCAA Tournament , and it will take all that they have to pull a win over the South Carolina Gamecocks.

Standing sixth in the NCAA rankings and eighth with the Associated Press, South Carolina is the top seed in the Stanford region of the tournament and boasts an impressive 27-4 record on the season.

CSUN in comparison, is the lowest-seeded team in the Stanford branch and possesses a modest 18-14 record for the season with a national NCAA ranking of 147.

The Matadors have improved drastically from the beginning of the season and entered the NCAA Tournament with a five-game winning streak, their longest this season.

Having succeeded in critical moments at the tournament and against the UC Irvine Anteaters who had defeated them twice in the regular season, the Matadors have shown more resolve in recent matches than the Gamecocks.

South Carolina gave up a critical game 68-58 against the Kentucky Wildcats, a lower seeded team in the Southeastern tournament.

While CSUN showed no signs during the Big West Conference Tournament of slowing their momentum, they will have to play at their absolute best to defeat the Gamecocks.

The Matadors have proven that they are able to handle the big dogs in the past with a 65-64 win over the USC Trojans during their lowest point this season on Dec. 10.

In order for the commuter school in the center of the San Fernando Valley to triumph Sunday, they will have to dial in everything they have offensively and defensively to keep the Gamecocks from overtaking them.

The Big West Player of the Year led the conference in 3-point shooting and can turn the game into a shootout with the Gamecock’s Tiffany Mitchell.  Guay also rebounds well (4.8 rebounds/game) and can find other ways to contribute if she has a bad shooting game.

Mahlknecht was 11th in the nation in blocks per game and shut down the conference’s top centers in Big West play, including senior standout Molly Schlemer of Cal Poly in the conference tournament title game.  Elen Ibiam will be her toughest matchup yet.

Despite being a high-volume shooter, Lister still scored 15.3 points per game and can take over when Guay is a non-factor.  She will be a boom or bust player, as she can either light it up or struggle, such as only shooting 72 percent from the free throw shooting.

The South Carolina Gamecocks enter Sunday’s matchup with the Matadors as one of the strongest teams in the nation on both sides of the floor.

The Gamecocks are ranked eighth in the nation in scoring defense (55 points allowed per game) and have held opponents to under 60 points 16 times this season. Junior center Elem Ibiam rejected 82 shots, good for 20th in the nation and nine spots behind CSUN junior center and Big West Defensive Player of the Year Camille Mahlknecht.

On offense, South Carolina is a top-5 shooting team in Division I, shooting 48 percent from the floor. Junior forward Aleighsa Welch has shot 57 percent from inside the arc, but is still just the second-best player on her team.

Sophomore guard Tiffany Mitchell averaged 15.2 points per game en route to her Southeastern Conference (SEC) Player of the Year award, and was a sniper from downtown shooting 52 percent on just two attempts per game. Mitchell also knows how to get her teammates involved on offense with 108 assists dished out on the season.  Mitchell also swiped 60 steals, but did commit 91 turnovers in just 31 games.

Freshman center Alaina Coates was the SEC freshman and co-sixth woman of the year as she added scoring (12 points per game) and defense (64 blocks) off of the bench.

While the Gamecocks are one of the nation’s most well-rounded teams, they have struggled in the spotlight.  South Carolina lost to the Kentucky Wildcats in the SEC Tournament semifinals.  Last year as a No. 4 seed in the NCAA Tournament, the Gamecocks fell to the No. 12 seed Kansas Jayhawks in the second round.

While head coach and SEC coach of the year Dawn Staley’s team expects to run the Matadors out of the gym on Sunday, their spotty history in big games can pave the way for a close game.

At 6-4, Ibiam is the Gamecock’s tallest starter guarding the paint.  However, Ibiam has been a force, collecting 82 blocks on the season and shot 55 percent from the floor.  Ibiam should be a solid counter to CSUN’s Mahlknecht.

Mitchell has been a lights-out shooter, shooting 51 percent from the field, 51 percent from three-point range.  However, she is prone to turnovers with 91 on the season and could have trouble with Guay, who averages 1.6 steals per game.

The forward has logged the second-most minutes this season for the Gamecocks, and has provided all-around production with 13.7 points 7.5 rebounds per game as well as 42 total blocks. However, she hurts USC at the charity stripe, shooting 60 percent.