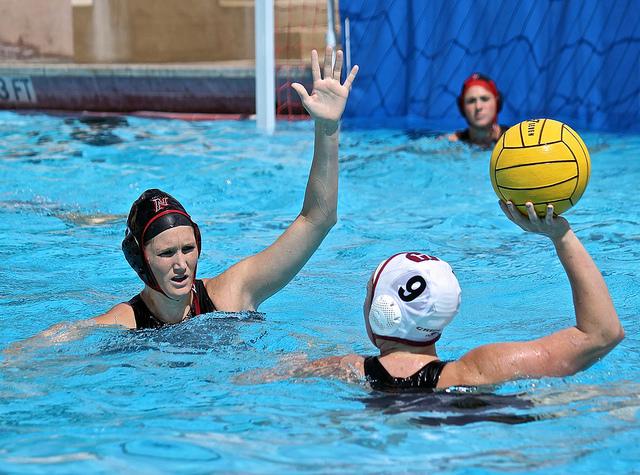 The Matadors (17-5) handily defeated the Cal Lutheran Regals 22-8 on Thursday at Matador Pool, tying a school record set for goals in a game and bring their winning streak to nine.

The game started off at a rapid pace for CSUN, with senior attacker Lindsy Duncan scoring her first of three goals within the first 15 seconds of the game for CSUN.

By the end of the first period, five different players had scored for the Matadors, including Duncan with two more, giving the Matadors a 7-1 lead.

The Regals substituted all six players in the third period, which caused a more competitive period for the Matadors. junior attacker MacKenzy Fowler, junior utility player Kelcy Barott, Petras and sophomore attacker Taitum Herrington all scored for the Matadors.

Regal junior Jordan Card, sophomore Amanda Jones, freshman KC Brendel and junior Adrienne Ingalla all scored for the Regals, which left the score 17-6 in favor of the Matadors at the end of the third.

The Matadors owned most of the final period by scoring five more times against the Regals, including a goal at the final seconds by Herrington. CSUN finished the period with a 22-8 victory over the Regals. The lone scorer in the fourth for the Regals was Jones.

13 different Matadors were able to score, including four goals by Barott and twice for Duncan and Kammer.

The 22 goals tied a school record for goals in a game for the Matadors, which was set nearly two years ago against the University of La Verne.  The Matadors will return to the pool Sunday at noon at Northridge when they host the Hartwick Hawks (13-7).