Women’s Basketball: Matadors give gutsy effort but fall to Gamecocks in NCAA Tournament 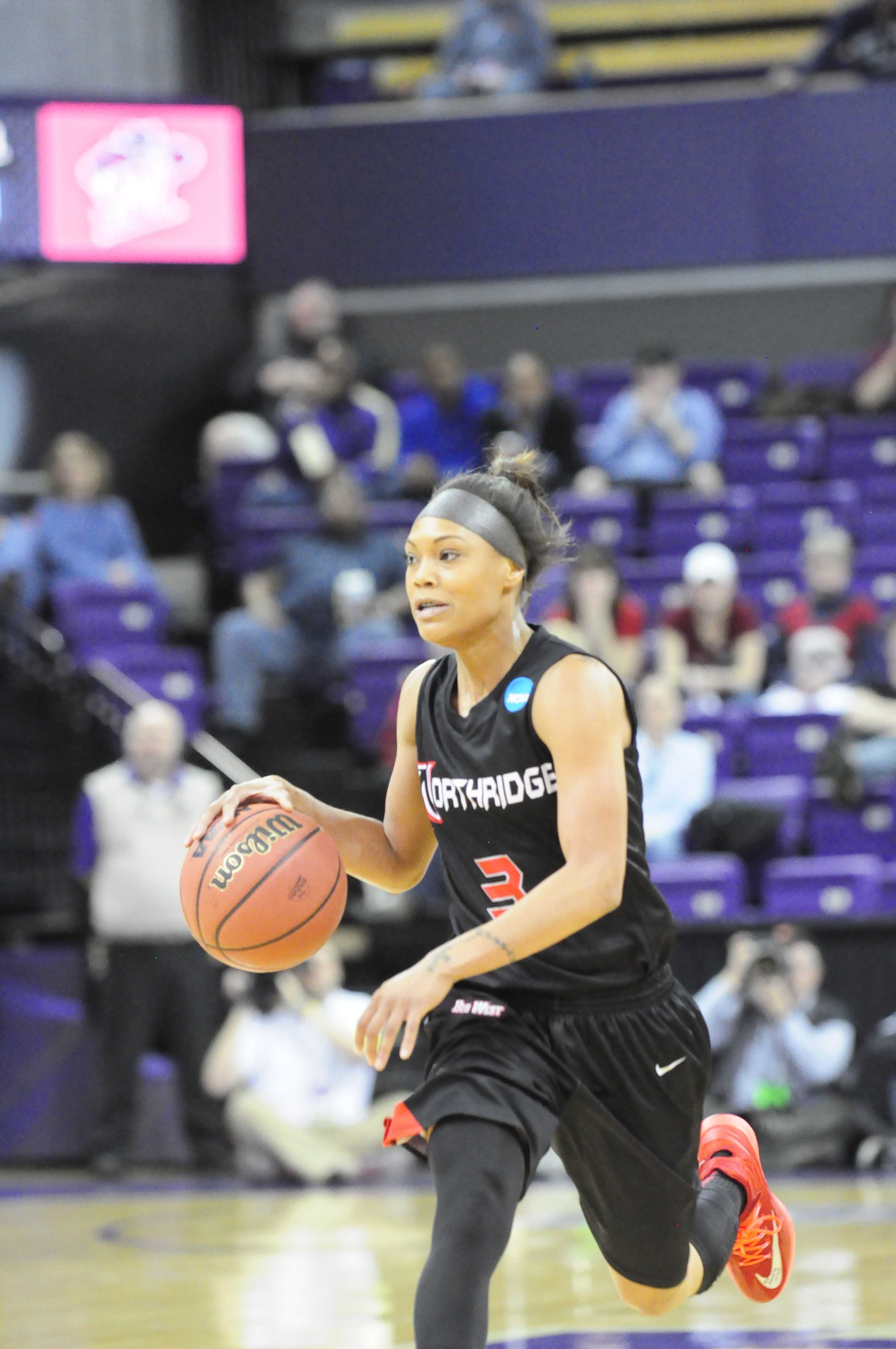 Junior guard Janae Sharpe dribbles up-court during the first half of CSUN's first round game against the No. 1 seed South Carolina Gamecocks. Photo Credit: Mateo Melero

The Matadors gave testimony to the age-old adage that all good things eventually come to an end.

Suffering heavily from the height of the South Carolina Gamecocks, the Matadors gave up the game 73-58 in the first round of the NCAA Tournament.

South Carolina laid down 36 points in the first half, all from within the arc, and the bulk of them from junior forward Aleighsa Welch and sophomore guard Tiffany Mitchell.

“Going into the game we knew the game was going to come down to free throws and rebounds,” said Flowers. “I think we had lapses in our execution, and for our student-athletes that was part of the message after the game,” said Flowers.

CSUN fell behind shortly after the tipoff but managed to stay close to the Gamecocks throughout the half.

They countered with what they could drive into the South Carolina defense and made good off a trio of threes from junior guard Janae Sharpe.

The Matadors came into the second half pushing hard against South Carolina’s offense and managed to stay within a reachable distance of the Gamecocks.

Sharpe held the offense for Northridge in the first half and put down 15 points and raked in six rebounds for her team.

“I think they made big plays, I think Sharpe did a good job of coming through,” said Welch. “They were scrappy.”

Around four minutes in the half CSUN’s junior guard Ashlee Guay suffered an injury and sat on the bench for the remainder of the game.

“I was jumping up for the rebound and I guess we both fell down together,” said Guay.

The refs called a foul on the CSUN guard.

With three minutes left Northridge pushed to within six points of the Gamecocks, but as the clock trickled down the Matadors were unable to recover.  CSUN was forced to foul South Carolina to get the ball back, but the Gamecocks sank their free throws to put the game out of reach.

Aside from their final result,  the Matadors enjoyed a successful run this season, unlike anything the program has seen in the past decade.

Having won a conference title for the first time in the Big West and an invitation to the NCAA Tournament with the conference tournament championship, CSUN has taken a turn for the best since Flowers took over the program.

Flowers walked into a program facing tough times four years ago. The team was coming off several mediocre seasons and didn’t do any better in 2010-11, but the coach wasn’t discouraged by the circumstances.

“It was exciting from the standpoint of I was (living) a personal dream of becoming a division one head coach,” said Flowers. “And obviously when you become a head coach, especially a first time head coach, you going to inherit a situation that is not ideal.”

That first season Flowers and the team pulled a 4-26 record and didn’t fare better than the previous year which held a record 4-24 record under head coach Staci Schulz.

But the next year saw better results and the Matadors bagged seventeen wins for the season and gave up 14 games in the 2011-12 season.

“As we started to get into it and going to work, it was challenging,” said Flowers. “But nonetheless it was still exciting and I felt really fortunate.”

But the following season proved to be a turnaround for the Matadors and the program saw success that it hadn’t seen since 2005.

The 2013-2014 reason started out rough for the Matadors. They stumbled to a 5-10 record in the preseason and gave up games to big-name programs and NCAA Tournament squads such as the Brigham Young Cougars and Oregon State Beavers by as much as 20 points.

“It was a struggle, we expected to be good early on and when that didn’t happen it could be frustrating,” said Flowers.

When the new year rolled in the Matadors had a 5-10 record in the preseason, and it didn’t look like it was going to get any better. At some point, CSUN pulled from deep inside and rallied to take the lead in the Big West Conference and eventually the championship.

They took their first conference match of the season in a road game against UC Davis 56-52 but would take a loss in the next game to the Hawai’i Rainbow Wahine.

As January rolled by the Matadors would hold strong and managed to snatch a solid win against the Big West’s reigning champs, the Cal Poly Mustangs, at the Matadome 81-76.

Having lost to UC Irvine initially 83-73 in January, the Matadors would suffer another loss to the Anteaters in February 76-72 and would remain the only team CSUN had yet to beat going into the conference tournament.

As fate would have it, CSUN’s first match in the Big West Conference Tournament would be against UC Irvine.

“From our standpoint if we couldn’t beat Irvine then we didn’t deserve to win the championship,” said Flowers.

CSUN shutdown Irvine with a devastating counter to their offense that shut down their primary shooter Camille Buckley and sent the Anteaters home 78-60.

The next day, the Matadors would hold their effective play and again execute a defensive plan that would take out the Cal Poly Mustangs 73-58 and secure the tournament for CSUN.

The CSUN Women’s Basketball team will return next season with its entire starting lineup next year.  Guay and Mahlknecht, who received Player of the Year and Defensive Player of the Year awards, respectively, will be returning with bigger goals for the 2014-2015 season.

“We’ll go back and we’ll be better this time next year,” said Flowers.