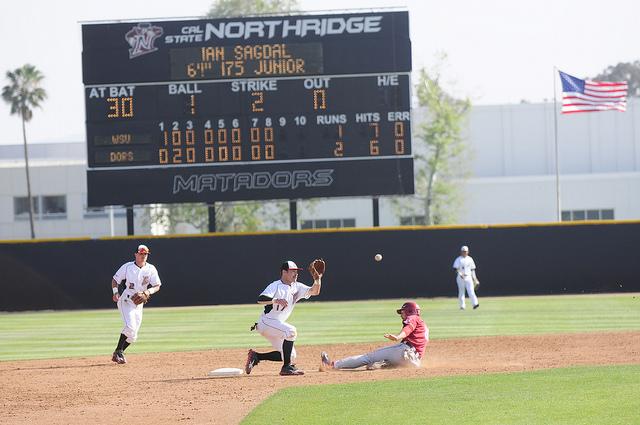 Usually on the wrong end of one-run games this season, the Matadors found some luck in their past two games.  Rather than a walk-off like the win last Wednesday, the Matadors scored early and hung on for a 2-1 victory over the Washington State Cougars, in a make-up game Monday at Matador Field.

Senior right-handed closer Shay Maltese added some late-inning dramatics, but kept his composure and earned a two-inning save.  With a runner on second base in the eighth inning, Maltese got two left-handed batters to strikeout and groundout to end the inning.

“He does a pretty good job against righties and lefties,” head coach Greg Moore said of the eighth inning matchups.  “He mixes well, his slider has so much depth that we don’t worry too much about Shay.”

In the top of the ninth inning, Cougars sophomore third baseman Nick Tanielu singled up the middle and took second base on a wild pitch by Maltese.

“I just started throwing the change up a couple of days ago, so I just gripped it a little too hard,” Maltese said.  “I just came back and made the next pitch.”

After a grounder advanced Tanielu to third base, Maltese got sophomore first baseman Matt Mendenhall to ground out and end the Cougars’ threat for the Matador win.

CSUN drove in their only runs of the game in the second inning behind a triple and single.  Cougars left-handed starter Layne Bruner gave up a walk to the leadoff batter, sophomore third baseman Nicolas Osuna.  Freshman catcher Dylan Alexander hit the first triple of his career to score Osuna and tie the game up at 1-1.  One batter later, sophomore first baseman William Colantono came up to bat with a hitless streak of nine at-bats.  Colantono singled up the middle to score Alexander easily from third and gave the Matadors a 2-1 lead  they would hold for the rest of the game.

“I was talking to (assistant coach Jordon) Twohig and (assistant coach Chris) Hom and they just said ‘just go up there and say who cares,’ and that’s what I did,” Colantono said.  He finished the game with two hits.

Colantono’s hit was enough to force the Cougars to plug in junior right-handed pitcher Scott Simon, who forced harmless pop-outs to end the  inning.  Simon shut down CSUN’s offense for the next five innings as he threw four straight three-and-out innings before escaping a two-on, two-out situation in the bottom of the seventh inning.

Matadors senior shortstop Brett Balkan smacked a shot into right field to advance the runners, but junior pinch -runner Nico Garbella was thrown out at home after aggressive baserunning by CSUN failed to yield an insurance run.  Despite the result, Moore had no doubts about the decision.

“In that situation you need to make the right fielder make a quality throw,” said Moore of CSUN’s decision to send Garbella home. “If it’s (the game) going to be close, you push it because you need another hit to score the run, so we took that chance there.”

In the bottom of the eighth inning, senior center fielder Ranny Lowe singled and junior second baseman Ryan Raslowsky came up to bat.  CSUN tried to play hit-and-run with the speedsters at bat and first base, but Raslowsky spoiled a pitch foul.  Two pitches later, Lowe didn’t run on contact as Raslowsky grounded into a double play, erasing CSUN’s best chance to score in the late innings.

Normally a reliever, right-handed pitcher Louis Cohen started the make up game for CSUN, pitching two innings and allowing a single and triple in the first inning to give the Cougars a short-lived 1-0 lead.  Cohen was relieved by junior right-hander Brandon Warner, who turned in 4.2 scoreless innings – a stronger performance than his last appearance when he allowed three hits and a run while only recording two outs.

Warner ran into trouble in the top of the seventh inning when he allowed two runners on base with two outs, but was replaced by sophomore right-handed reliever Anthony Cortez.  Moore’s move to bring the Cortez to face right-handed sophomore center fielder Trek Stemp paid off, as Cortez got Stemp to pop up on just two pitches.

The Matadors will play the Pepperdine Waves (17-6) today at 3 p.m. before returning home for a three-game series with the Long Beach State Dirtbags.