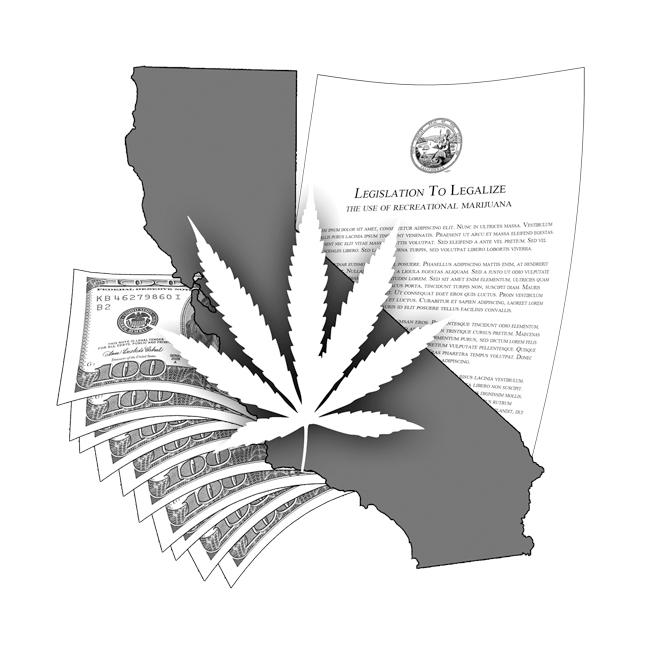 Morgan Tilford, a senior majoring in communication studies, played for CSUN’s men’s basketball team last year. But he did not return this season to play for the Matadors because of a recurring ulcer problem that has kept him on the bench many times during his sporting career.

“There is no known cure for it and I’ve been to many doctors,” Tilford said. “The doctors told me the only true cure or containment for it is THC and cannabis.”

But Tilford does not want to obtain a medical marijuana card. Instead, he believes marijuana should be legalized and that it would “be a good thing.”

Recently, Colorado recouped roughly $2 million in January due to marijuana tax revenues from a 12.5 percent sales tax and a 15 percent surcharge on the plant.

Tilford feels the monetary success that Colorado had can translate well to California, should it decide to also legalize recreational use of marijuana.

“It would definitely benefit the state, especially since Colorado has shown evidence that it can happen,” Tilford said.

Tilford believes legalization in California is within reach, citing the minimal negative effects of marijuana on people.

In 1996, Proposition 215 was passed in California, making it the first enacted law which enabled the medical use of marijuana for Californians.

The law allowed physicians to prescribe the drug to people who were undergoing cancer treatment and people with anorexia, arthritis, migraines or other illnesses where marijuana’s medical effects can potentially provide relief.

Prop. 215 also attempted to carefully regulate the safe and affordable distribution of marijuana and marijuana paraphernalia.

But the legalization of marijuana hit a roadblock in 2010, when California attempted to legalize marijuana with Proposition 19. The law would have legalized the drug, but only for individuals 21 and older.

The state government meanwhile would be able to tax and regulate marijuana, much like Colorado and Washington. Currently, possessing marijuana is a misdemeanor, and selling it is a felony and may result in a prison sentence.

“From a safety standpoint, no, I don’t think it will be right,” Oiyemhonlan said. “It depends how you want to look at it because there’s an economic standpoint and a social standpoint.”

Besides safety concerns, Oiyemhonlan said there are a lot of additional factors that come into play when dealing with legalizing marijuana.

“You have to consider (some things) while you passed that law and how it influences others who might not smoke,” she said.

Oiyemhonlan believes it will benefit the state economically, if the money is used correctly.

“That money that they use that’s taxed can go to things like schools and social programs,” Oiyemhonlan said. “There may be some good that comes out of it.”

“One, the state could tax it and use the revenues to improve the budget and reduce the other forms of taxes,” Halcoussis said. “Two, money could be saved on law enforcement and law enforcement agencies could redirect resources towards fighting more serious crimes. Three, there would be an opportunity for entrepreneurship to sell marijuana legally.”

Halcoussis said legalization of the narcotic will not necessarily lead to an increase in use or abuse.

“Some argue that the increased use of marijuana would lead to a decrease in productivity in the workforce, but I don’t know how many people will start smoking marijuana just because it’s legal,” Halcoussis said. “I know I won’t.”

“There are so many dispensaries that need to be cut down on, but with those that are cut down, there is still an immense job market that can open up jobs for other people,” Ariastabares said. “There is a big foundation for marijuana dispensaries that California can profit immensely from.”

“It’s still being exchanged informally in the black market economy, so for the government to tax it, (it’s) just a way to kind of increase revenue,” Ariastabares said. “If California can model something similar to what Colorado did, then perhaps California can see that kind of revenue, especially because of the population size of California.”

Ariastabares is curious about how the government will use the potential revenue, and hopes it will go back into the community.

However, he thinks marijuana should only be legal for medicinal use.

“For recreational use, that’s where it’s up in the air,” Ariastabares said. “I’m not for it or against it. I would want it more regulated. I would definitely legalize it, but with regulations.”

“Many people who prohibit use or say it’s a gateway drug to other drugs – but with anything, like alcohol or cigarettes – if you give the proper education to the community, I think it will establish (a) less harmful way of using it.”

“I have a couple (of) aunts that have cancer and are in treatment, so that will help them,” Sotelo said. “One aunt takes it just to help her relax when she’s going back and forth to hospitals for treatments and such.”

Sotelo believes the legalization can help with California’s budget.

“They could probably be making a little bit of money from that,” Sotelo said. “At the same time, I don’t know what kind of problems it would cause. In regards to the kind of shops they have up already, I don’t know if they would impose more taxes on them and make it harder for them.”

Sotelo hopes tight regulations will come with legalization, mainly selling it to minors.

“I think it’s fine as long as it doesn’t get into hands too early,” Sotelo said. “I can’t think of any problems aside from vending to minors. The same way alcohol still gets into minor’s hands, I don’t think there’s any way you could permanently police that.”

Sotelo believes the high exposure marijuana is receiving is a sign that legalization is not too far away.

“I feel it’s becoming more okay with the general public, but at the same time I know that there are still very conservative people living in California outside major cities,” Sotelo said. “It’s something that I don’t think (it) is (as big) a  deal that people it make out to be. Yeah, it’s a problem if it’s overdone, but if you take it in moderation, that’s fine.”

Andrea Lymbertos, a public health major in her third year, believes dispensaries and the state will make great profits off of legalizing the drug.

“It’s like the tobacco industry,” Lymbertos said. “It’s huge and a lot of people are going to make a lot of money off of that.”

“California will definitely project a lot more (revenue) because of its local areas and the beach communities and the majority of the (diverse) people here,” said Lymbertos.

Lymbertos thinks the revenue will help alleviate California’s debt. However, Lymbertos considers safety an issue too.

“California has a higher crime rate, so I feel like if they do legalize it, I feel like they’ll be afraid that it will probably increase it,” Lymbertos said. “Street dealers will probably be more aggressive because they’ll lose their income, so that probably will have an effect on crime.”

Lymbertos also believes medical marijuana will help some of her family members’ health issues, some who suffer from depression.

“Because they don’t completely qualify for (medical marijuana), they don’t get it — especially with arthritis, which runs in my family,” Lymbertos said. “And because doctors are against it, they won’t prescribe it to them.”

As for recreational use, Lymbertos feels it is a risky thing to propose.

“I am skeptical about it because I know some friends that do it, and I don’t know how the future will be for them,” Lymbertos said.