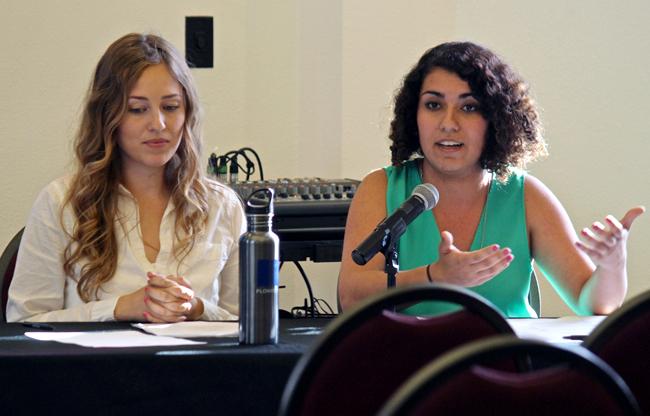 President candidate Tiffany Zaich (left) and vice president candidate Talar Alexanian (right), both defending the "United We Thrive" platform, speak during the A.S Presidential Debate, Monday, in the Flintridge Room at the USU. Election days will be on April 1st and 2nd, and there will be on-campus polling locations. Photo Credit: Lucas Esposito / Daily Sundial

Student communication and solidarity were the main issues at the Associated Students presidential debate on Monday in the Flintridge room.

Presidential candidates, Jesus Martinez-Ramirez, of the Student Success party, and Tiffany Zaich, of the United We Thrive party, were asked questions by current president, Christopher Woolett, who moderated the event.

Both presidential candidates emphasized an awareness of programs on campus.

“Too many of our students don’t know, for example, if your car battery dies, that you can get jump started by police services,” said Martinez-Ramirez.

Zaich shared what the duties of a president should be.

“The president is the student voice on campus, therefore I feel we need to get out there and engage [with students],” said Zaich.

“To work very closely with the president, with the rest of their senate and putting forward the vision for not only right now and the everyday student experience, but for the year and what programs need to be implemented, to be improved on,” said Alexanian.

“(We) need to stimulate discussion within the board and also to play devil’s advocate so that we make the best decision, rather than just a decision,” said Burt. “I always think that maximizing the decision made and being able to discuss all points of view is very important.”

Zaich and Alexanian both said they would like to see a farmers market on campus to have more options for students with organic and vegan lifestyles, more campus involvement and school spirit.

“I think it was great for each side to represent what their policies are and it was very clear,” he said.

Regarding the structure, Burt said he enjoyed participating in the debate.

“We didn’t really conflict as much as a typical debate would, but it was very clean, very nice and we were able to communicate our positions on all the topics that we wanted to,” said Burt.

Martinez-Ramirez spoke about the time constraints.

“It’s very hard to explain our platforms within two minutes, so there’s always that limitation, but overall it was a pretty good debate,” said Martinez-Ramirez.

Martinez-Ramirez has some hope that more students will vote this semester.

“Last year only 11.2 percent of our students voted, so that’s really one of our greatest concerns to improve that voter turnout,” said Martinez-Ramirez. “The decisions the students make on April first and second are not only going to have immediate impact on campus, but also at the statewide level. That’s why students’ tuitions didn’t go up this year.”