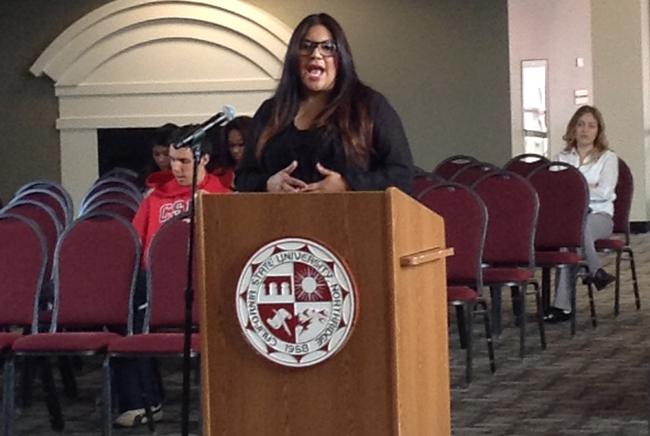 Francesca Vega the director of government and community relations at CSUN talking to the A.S. counsel about how she could offer her assistance at the A.S. meeting on Monday, March 24 at the USU Grand Salon. (Photo Credit: Dache Jackson/Daily Sundial)

(AS) praised the CSUN women’s volleyball team and applauded their success during the 2013 season at their weekly meeting Monday.

The team, along with coach Jeff Stork, were presented with a certificate and a bouquet of roses by Christopher Woolett, AS president and Talar Alexanian, vice president.

Instituting the CSUN Tradition of the Rose, Alexanian announced that the team will place a rose at the foot of the Matador honoring the team’s success.

“CSUN women’s volleyball team reached the second round of the NCAA tournament for the first time in the history of CSUN after upsetting No. 12 Colorado State,” said Alexanian.

The team was ranked among the American Volleyball Coaches Association top 25 for four weeks in 2013, eventually rising as high as 21st in the nation.  Stork was named Big West Co-Coach of the Year, and three Matadors were named to the All-Big West First team, including senior setter Sydney Gedryn and junior middle blocker Casey Hinger.

AS also talked about what will happen at the California State University Board of Trustees meeting tomorrow at Long Beach. CSUN has an item on the agenda regarding renaming the college of business and economics at CSUN as the David Nazarian College of Business and Economics.

If the proposal submitted by CSUN is approved at the meeting, CSUN’s college of business and economics will recognize $10 million contributed by David Nazarian, Alexanian said.

In addition, Nazarian has also committed to help raise another $15 million in the next three to five years for the college, according to the meeting agenda.

For the special presentation segment, Francesca Vega, director of government and community relations for CSUN, introduced initiatives and encouraged the senators to get involved and work toward glorifying the Matador pride.

Vega said she wanted to talk to the AS senators about issues related to the budget.

“I work with the business community, internship programs and I would like to bring my relations to help you all,” Vega said.

AS is also working on establishing a new CSUN initiative which will be chaired by Jeff Noblitt, the associate vice president of marketing and communications.

“This is an initiative to increase our reputation and visibility around the area, to promote the value of what the CSUN degree offers in terms of potential employers, benefit academic profiling of our freshmen class and attracting good faculty and staff,” Alexanian said.

Regarding financial matters, the AS allocated $5000 to CSUN Mobile Robot Club for the Intelligent Ground Vehicle Competition.

Also, $11,000 was allocated to the psychology department for the Western Psychological Association.