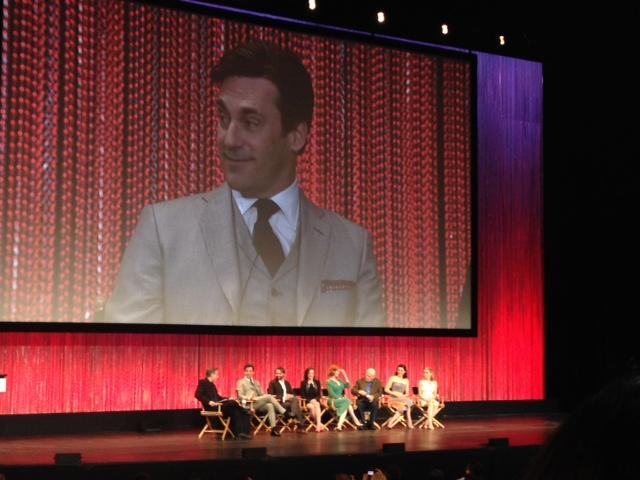 Once again we’ve reached the end of an era with AMC’s Emmy-winning original programming, and probably one of the best shows on television, Mad Men. The program is set to end next year.

Created and executive produced by Matthew Weiner, known for his writing on the Sopranos, Mad Men captivates audiences with its unique take on the advertising industry in 1960s New York.

Weiner and several members of the cast appeared at this year’s 2014 PaleyFest for Media, at the Dolby Theater in Hollywood on Friday March 21.

During the panel, Weiner introduced the last episode of the previous season as a refresher for the media and fans in attendance. We see the show’s main character and protagonist, Don Draper, played by Jon Hamm, at his all time low.

*Spoilers* Draper’s marriage with his second wife is jeopardized when he is caught having an affair by his daughter Sally, played by Kiernan Shipka. It get’s worse. Don who was one of the founding members of Sterling Cooper Price (SCP), is forced to take an indefinite leave of absence due to his excessive drinking and unstable lifestyle. *End Spoilers*

“The one constant that has always been in his life was work,” said Hamm about his character’s recent misfortunes. “It was the thing he could always go back to. Now not only is his marriage in trouble, but the relationship with his kids isn’t the best and now work is not there. That’s going to be a big hurdle for him, but it’s a challenge. Don is a survivor.”

Following the screening, along with Hamm and Shipka, actors Christina Hendricks, Jessica Paré, Vincent Kartheiser, Elisabeth Moss and Robert Morse were all in attendance to answer questions regarding the show’s end.

“I don’t know if I can speak for everybody, I think, but we’re in some phase of grief at this point,” Hamm said. “We are, I think collectively starting to realize the end is coming rather faster than we thought it was. There’s nothing we can do to prepare for it, it just is. It’s been amazing to have this much experience with this kind of thing, to have the actual final goodbye.”

Though Hamm seems to be handling himself well, other cast members revealed that they were feeling more emotional as the end draws near.

“I’m starting to feel the boulder in my chest,” said Elisabeth Moss, who plays the role of Peggy Olson, a secretary-turned-copywriter at Draper’s agency. “It’s starting to sink in that we’re gonna have to say goodbye to not only this work and the characters, you know, but this sort of family. I’m not gonna see any of these people ever again,” joked Moss.

Christina Hendricks, who plays the role of the Joan Harris, a partner at the agency, admitted that she would have a hard time letting go of the show as well.

“I probably started being emotional earlier than everyone,” Hendricks said. “I sort of think about it a lot and it’s going to be hard for me. You try to prepare yourself but you have no idea, and I’ve never had an experience like this. So I’m just bracing myself, and also savoring every last second and appreciating every moment.”

The panel lasted about an hour as the cast answered questions from host Mike Schneider and fans in the audience.

We’ve traveled with Mad Men through the swinging sixties, experiencing worldwide-televised events from the craze of Beatlemania to the assassination of JFK. The season left off in 1968, a dark time in the city of New York and on the fringe of the groovy seventies, leading the show into a whole new era, from its music to its fashion.

“We are very proud that the show takes humanity seriously,” Weiner said. “It’s one of the things that’s unique about it.”

Mad Men will undergo the Breaking Bad treatment, with the final season starting Sunday April 13, leading into 2015. Filming for the final episodes is expected to begin within the next few days. Until then, set your DVR’s for the season premiere of Mad Men as we end the story of Madison Avenue’s most talked about ad man, the irresistibly notorious Don Draper.