CSUN’s university costs analyzed down to the dollar 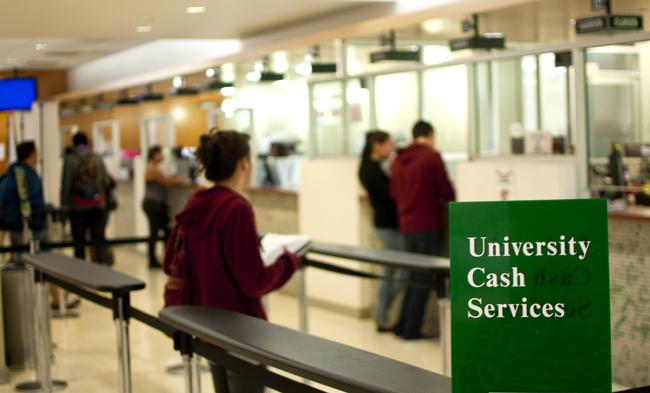 Students wait in line for services that range from financial aid to cash services in Bayramian Hall on Tuesday. Photo Credit by David J. Hawkins

If the sheer volume of the reports doesn’t complicate matters enough, perhaps maybe the three quarters of a billion dollars in expenditures, allocated from the general, lottery and enterprise funds will.

But for budget and financial administrators, as if it weren’t arduous enough to maintain the finances of a campus that served more than 38,000 students as of the fall 2013 semester, the task has become more complex in the last few years due to shortages in funds from budget cuts and other financial obligations.

Sharon Eichten, associate vice president of budget planning and management, said budgeting for the upcoming school year will be different from past years with Gov. Jerry Brown’s commitment to investing $142.2 million in the CSU system.

CSUN’s budgeting and planning office oversees the management of centralized costs, which have to be satisfied before any additional funding is allocated.

“We come up with what new dollars we need to carve off the top because those have to be satisfied,” Eichten said. “There’s no way we can’t have electricity and water and we have to cover health, dental and retirement for our university employees.”

Eichten said CSUN’s decentralized budget model, which means there are permanent-based budgets that each division on the campus automatically get each year, hasn’t increased due to the financial restrictions.

Once funds have been allocated to cover centralized costs and the permanent-based budgets, the leftover discretionary funds are distributed to the remaining departments and divisions based on perceived priority.

With all of the state’s financial difficulties, discretionary funds have been at a premium.

With the projected availability of new funds, each division on campus is prioritizing their budget needs.

“Each division is preparing a list of items they need new budget dollars for,” Eichten said. “We discuss and determine those priorities that everyone has and the dollars available, who’s going to get what.”

Eichten said academic affairs, which has the most money allocated to it from the general fund than any other division, would likely see its priorities addressed first, with funds also trickling into other departments to address rising enrollment.

“At a high level, specific priority number one would be to adequately fund course sections that we need for our enrollment,” Eichten said. “If you’re increasing your enrollment, then you’re going to have other costs associated with that enrollment in student affairs like counseling and advising.

While resources may seem abundant as CSUN was allocated more than $700 million in expenditures, excluding transfers, during the previous school year. A large portion of those funds are already tied up in salaries, wages, benefits and financial aid obligations.

Financial aid, for instance, accounts for $300 million or about 41 percent of total expenditures.

Salaries, wages and benefits are not too far behind at a combined $286 million or 39 percent of total expenditures.

Within that figure, academic salaries and wages for instruction, which include tenured, tenure-track, department chairs, lecturers, teaching associates, graduate assistants, counselors, substitute and summer/extension faculty, account for $96 million or 13 percent of total expenditures.

While it would be easy to believe that educators receive the lion’s share of salary obligations, the combined salaries and wages of executives, management, support staff, student assistants and work study actually eclipse that amount by over $5 million.

While Brown’s 2014-2015 budget does not meet the amount in the CSU budget proposal, Eichten said the university can take some solace in knowing the increase in enrollment won’t require as much additional funding as was projected.

“We know for a fact that instead of a five percent increase in enrollment, it’s something in the order of a 2.5 percent increase,” Eichten said. “Out of the gate, we know that enrollment funding is half of what they asked for.”

In the CSU’s November budget proposal, $79.2 million of the $237.6 million was recommended to be allocated to the five percent projected enrollment increase.

If there is one drawback though to the decrease in projected enrollment, less revenue will be generated from tuition.

In the CSU’s budget proposal, the CSU system projected enrollment grow would add an  additional $85 million in tuition revenue, which will now be substantially lower.

However, Eichten admited that there are still a lot of unknowns with regard to how much CSUN will see of the $142.2 million allocated for 23 campuses within the CSU system.

White said the investment is necessary in order to boost the CSU graduation rate by 10 percent for undergraduates who begin at CSU campuses as freshmen and by five percent for community college transfers.

In his State of the CSU address, White earmarked seven different areas for distributing funds, including increasing tenure-track faculty hirings.

White said 10 to 20 percent of the $50 million, meaning $5 million to $10 million, would go toward increasing tenure-track hirings.

It remains to be seen how the CSU will adjust their allotments for the budget, given the governor’s proposal was more than $95 million less than the amount the CSU had asked for.

As the end of the 2013-2014 school year inches closer, Eichten and her colleagues anxiously await word from the Chancellor’s Office and anticipate beginning preparation for the upcoming year shortly.

“Once we get the budget memo from the Chancellor’s Office, we’ll know what new funds are available for distribution to the campus so folks will be get a sense of what discretionary budget dollars we’ll have,” Eichten said.