Alumnus donates $10 million in cash at Board of Trustees meeting 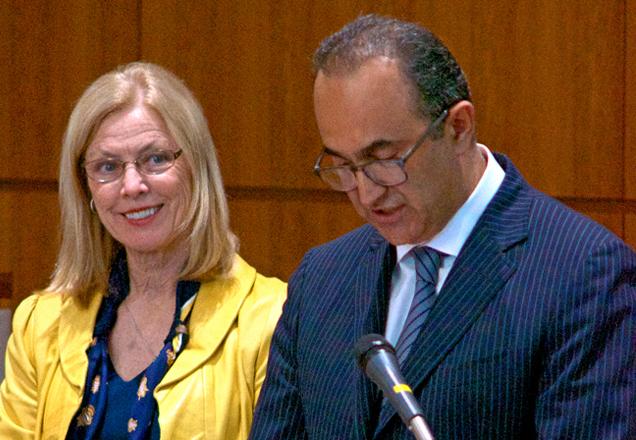 A $10 million cash gift from David Nazarian to the College of Business and Economics will be used for entrepreneurship, student mentoring, real estate and professional development CSUN President Dianne F. Harrison announced at the California State University (CSU) Board of Trustees meeting Tuesday.

The donation will be coupled with a pledge to raise $25 million and renaming the college to the David Nazarian College of Business and Economics.

“On behalf of the entire Cal State Northridge community, first I would like to thank David Nazarian for his philanthropy and leadership,” Harrison said. “His leadership of a $25 million initiative launched with his personal gift of $10 million. The renaming of the college will have a transformative impact. His involvement will make a good college of business and economics great.”

The money will also be used to make the college state of the art in its use of technology, globalization and branding, Harrison said.

Harrison addressed Nazarian and his family before he was presented with a plaque on behalf of the Board of Trustees.

“David, you and your family’s story is a CSUN story,” Harrison said. “Your lives were shook by the Iranian revolution that sent you to America with limited resources, but you have come back stronger than ever and are making a huge difference in the world.”

Nazarian earned a degree in business at CSUN in 1982.

“What you and your family have accomplished in business is extraordinary and is an example to all of us and all of our students of what you can accomplish with a CSUN degree,” Harrison said.

Nazarian credits his education at CSUN with much of his success.

“My success has been largely due to the opportunities that have been afforded to me in this country,” Nazarian said. “Throughout my career I have realized that there is nothing more important and impactful than access to public education. I want to invest in my own community.”

Talar Alexanian, student trustee, was also there to present the plaque along with Harrison.

“I am honored to be here today,” Nazarian said. “Words can’t describe how meaningful this moment is for my family and me.”

The open session portion of the meeting, which was scheduled to begin at 11:30 a.m. was delayed due to matters that the Trustees had to discuss in a closed session. The open session began at 1 p.m.

Members of the California State Student Association (CCSA) from a wide variety of campuses including CSU Channel Islands, San Francisco State University, CSU Monterey Bay and the California Maritime Academy were also in attendance to propose a $4 annual fee to fund their organization.

The fee, which is proposed by students, would be voluntary and is intended to increase student engagement with policy makers.

CCSA is currently a membership based organization. Their current budget includes $282,572 in annual membership dues. The proposed fee could potentially generate $1.78 million in funds for the student-run organization. The issue is scheduled to be voted on at the next Board of Trustees meeting on March 26.