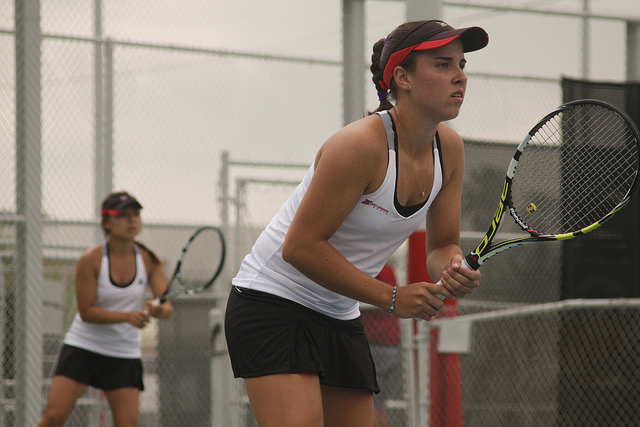 The Matadors (8-6, 2-2) would not let fatigue get the best of them as they won a second match during a strech of five matches in eight days.

They defeated the New Mexico State Aggies (5-9) 4-2 Tuesday at the Matador Tennis Complex.

CSUN grabbed three points for sweeping the doubles matchups with easy victories by the No. 1 and No. 2 duos. No. 3 doubles partners Lorraine Cheung and Scout Shutter pulled away from their Aggies counterparts in an 8-6 victory.

Cheung clinched the match for CSUN as she defeated Aggie junior Denise Van Der Ben 6-3, 6-4.  Cheung had to adjust to her opponent, as Van Der Ben had a similar style of play, forcing Cheung to adjust.

“I had to be more aggressive at times, but at the same time be patient and wait for my chances,” Cheung said. “I really had to keep the ball deep and be patient, and then when I had the chance, attack and take it.”

Sophomore Leslie Chang won the third singles matchup of the day, defeating freshman Gabrielle Joyce 6-2, 6-4 to improve to 3-0 on the season in singles matches.

With the victory on Tuesday, the Matadors clinched a winning record during their current seven-game homestand, improving to 8-4 at home on the season.  Despite their over .500 record during the homestand, CSUN didn’t make ground in the Big West, as they haven’t played a conference opponent since March 8, a loss at the UC Irvine Anteaters.  However, Victor was satisfied with the team’s performance in the past two weeks.

“This team showed a lot of resiliency in that we did have a couple of tough losses,” Victor said.  “However, we had come back and fought and played hard every match no matter what.”

Junior Criss Rodriguez, No. 1 doubles partner to Lin and usual top-3 singles slot, was able to nurse an injury and return to play this week.  On Monday she did not complete her match with Aggies No. 3 singles senior Ros-Polly Nguyen, recording a Did Not Finish (DNF) in a tie-breaking third set at 3-3.

Over the homestand, Victor was able to use more variety in his lineups, as junior Corinne Schnyder and freshman Scout Shutter saw time on the court with Shutter earning a few big victories.

“(Scout’s) been very strong, and she’s got a win over Irvine and Harvard,” Victor said.  “She’s struggled the last couple of matches but I’m not worried.”

The Matadors will conclude their homestand today at 1 p.m. when they face the Wellesley Blue.