Students protest success fee at CSU Board of Trustees meeting 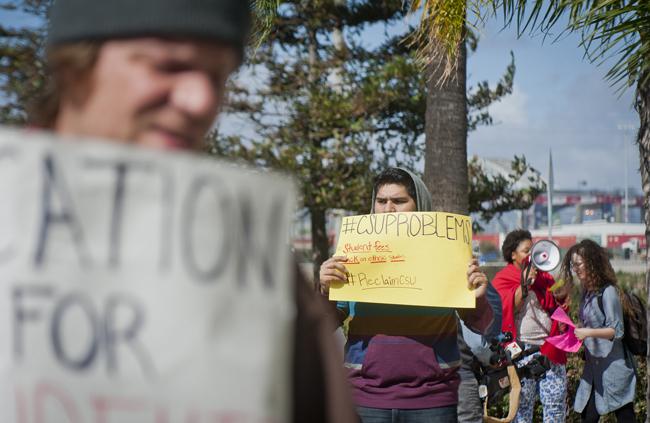 SQE members from various CSUs participate in a rally in front of the CSU Chancellor's Office in opposition to university success fees during the Board of Trustees meeting on Wednesday. (Photo Credit:Charlie Kaijo/Senior Staff)

Dozens of students enrolled in the California State University (CSU) system, protested against recent tuition fee increases at the CSU Board of Trustees meeting on Wednesday.

Several students began chanting and marching outside of the CSU Chancellor’s Office in Long Beach beginning at 9 a.m. that morning.
Students from California State University Fullerton and San Diego State University protested with other students from Southern California’s CSUs to demand that Timothy P. White, CSU Chancellor, withdraw his approval of the controversial student success fees.

Although CSUN approved their version of the Student Success Fee in 2008, Edgar Ramos, 24, who is graduating in May from CSUN, spoke on behalf of students from other CSUs.
“We’re here in solidarity with all campuses in Southern California… [the board] works for us, but they don’t serve us,” Ramos said.

Ramos urged the board to seek other ways to raise funds.
“To be in agreement with these fees is to lack creativity… there are different venues to get money from, yet their go-to option is to increase tuition,” he said.

The student success fees allow each college campus to implement extra costs, which are then applied to student tuition fees in order to increase class availability, hire more faculty and assist students in graduating earlier.

Costs are estimated to increase from a range of $200 to $500, depending on each campus.
“It’s what I call a capitalist solution to a capitalist problem, where instead of making education available for all as a public good, they turn it into a profit venture,” said Eddy Alvarez, 25, senior political science major.

Alvarez, a member of the California Student Union and the Green Party, addressed the crowd of protesters outside, explaining that a conversation was necessary in order to resolve the issues that students were encountering with these fees.

“[The student success fee] pushes out people who are less able to borrow money or working, more specifically people of color,” Alvarez said.
CSUN is one of the campuses that have implemented this fee, known as the Campus Quality Fee and students have been paying it as part of their tuition fees since 2008.

The fee was $106 for the spring semester. For fall semester, the fee will be $108. Other CSUs that began charging a fee include Pomona and Long Beach and more recently, the Fullerton campus. Dominguez Hills is waiting on approval to implement the same policy for its students.

While some protested outside, several students sat in during the meeting to demonstrate their opposition for the fee increase holding up signs that read, “No student success fees,” and “What happened to the promised tuition freeze?”

Gov. Jerry Brown proposed in his 2014-15 budget that he would increase both the CSUs and UCs funding by more than $140 million. Due to this action, the CSU promised a tuition freeze until 2016-17, a promise that students say the board has not kept.

During the public comment section of the meeting, students and faculty from various campuses made comments on the need for tobacco-free campuses, ethnic studies and sustainability implementations. However, none were as vocal as those in favor of and opposed to the success fees.

Two students and several faculty from SDSU and CSUF expressed their gratitude toward the chancellor for approving the implementations of success fees, as they said that they would serve as a benefit for students and provide them with a better education.

“The Cal State University is a state university system and should be treated as such. It is time for the trustees and the chancellor to lobby harder for the students and faculty and uphold the values of this institution,” said Artun Ereren, 24, history major at CSUF.

Ereren also said that the funds have been falsely allocated within the campuses, as he has seen more money go into the CSUF athletics department than to actual courses.
After the public comment section closed, the students rallied outside until noon, while the front entrance was guarded by police officers. During the meeting, no comment was made regarding the demonstration or public comments.