Peace out Fred Phelps, God hates you too 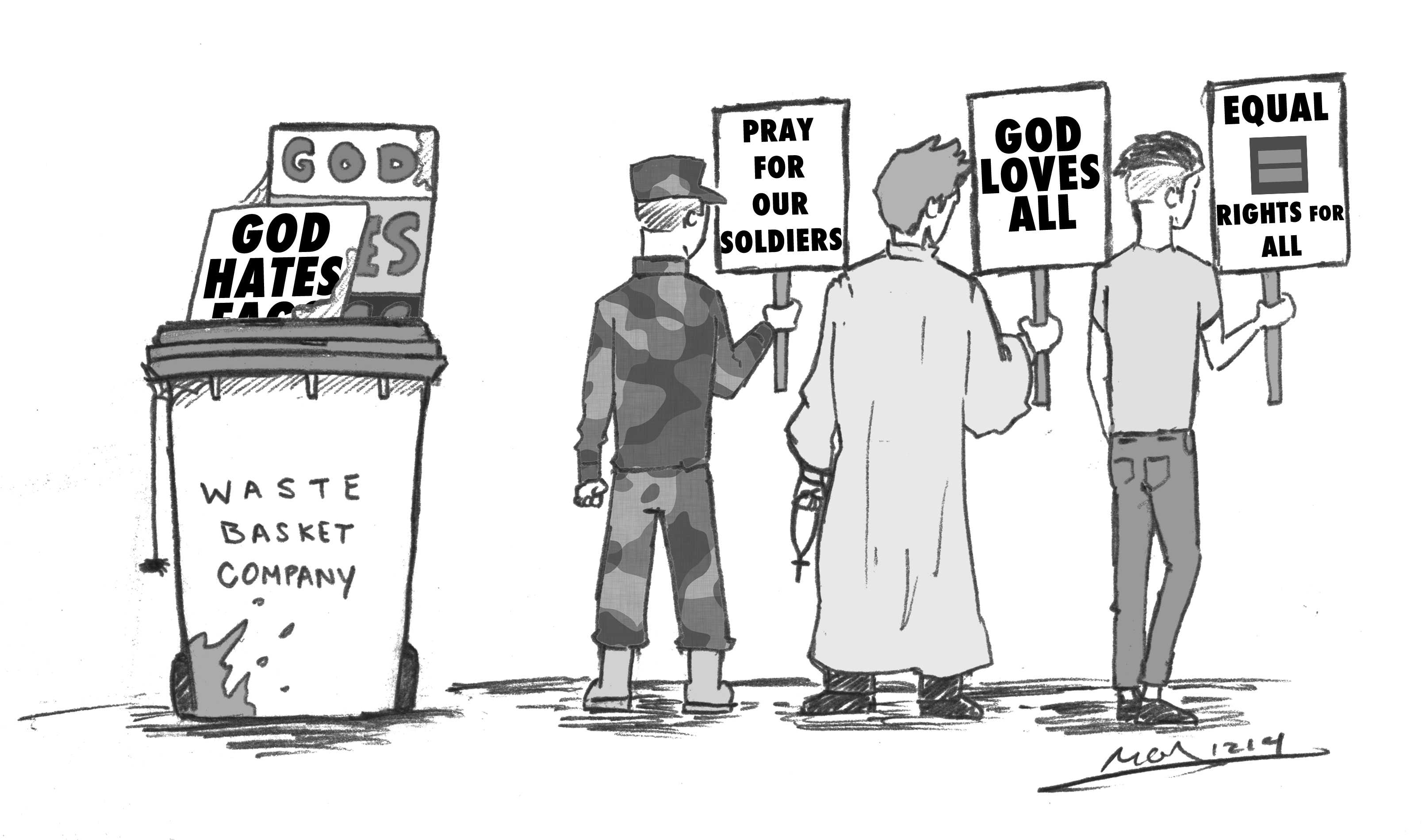 Though by no means a trend, hate has become an unnecessary commodity all across the world. Many nations and many people are to blame, but history seems to redeem these odious people. As the millennials of the world age and mature and begin to make social changes and choices, the number of vile people in the world will appear to have shrunk.

Surely, this can be said after the recent passing on March 19 of the “reverend” Fred Phelps, founder of the Westboro Baptist Church (W.B.C.). A small band of radicals ranging from forty to one hundred followers (consisting mainly of Phelps’s family members), the W.B.C. is well known for their incendiary and hurtful protests and declarations: “Thank God for Dead Soldiers,” “Thank God for 9/11,” as well as their hate speech towards the LGBTQ community. They are known for their picketing of funerals, such as those of Nelson Mandela and Steve Jobs, with the announcement to picket the latter’s funeral ironically sent out on an iPhone.

Even amongst Phelps’s family, his death discloses a mixed reaction. His son, the atheistic Nate Phelps, mourns his father’s death “for the man he could have been.” He has become a strong supporter of gay rights since his leaving the W.B.C.

In the past, the younger Phelps said his father had been abusive. These claims were denounced by his estranged sister, the church’s insidious spokeswoman Shirley Phelps-Roper, but nobody should be taking her words as any sort of gospel.

In “Your Dashed Hopes,” Westboro’s posting of Phelps’s death, stands as their exemplification to defend their former leader’s actions in life. The post makes repeated reference to their wicked idea of God, quoting several psalms and other points in the Bible, ending with, “Repent, for the Kingdom of Heaven is at hand!” (I recall hearing Jim Carrey’s character Ace Ventura say something hilariously similar).

The responses to Phelps’s death have been predictably congruent. While no one will miss the “reverend’s” death, there are no celebratory acts taking place. Nothing like the praise America had when that other hated monster, Osama bin Laden, was finally put to sleep.

In an interview with USA Today, Al Snyder, whose son was killed in the Middle East, professed his relief for Phelps’s passing.

“I’m not jumping for joy,” Snyder said. “He inflicted a lot of pain on a lot of people and he was a very sick man.”

Another popular (I must say) reaction to Phelps’s demise came from a satanic cult. The leader, Lucien Greaves, insists that his cult will turn Phelps’s immortal soul gay. While quite morbid and weird, I must admit the statement is still quite amusing.

The Westboro Baptist Church has, in more recent years, been more prominent during these times of rising religious fanaticism and fervor. Among the bizarre insincerities includes one released before Phelps’s death. Not a protest or a discriminating vocalization, but of an “apparent excommunication” regarding Phelps. On Facebook, Nate Phelps mentioned about his father being excommunicated from the church he created.

As the world has been rid of Fred Phelps’s filth, so goes on his followers. Since they are so few in numbers, it is hard to imagine anyone supporting them or anyone from their ranks to live up to Phelps’s legacy. His daughter has been condemned by all media outlets, hated due to her religious fanaticism that has even disgusted those at Fox News.

I believe, however, that with the death of this decrepit creature, Westboro’s life expectancy is limited. In a nation with a growing support for marriage equality, religious fundamentalism will be in decline. After all, more young people are disbanding from their familial, religious practices due to anti-gay piety.

Change in doctrine to adapt to a changing political environment is a good thing. I find myself feeling a great deal of pride for religious groups that announce their support for things such as marriage equality and the acceptance of evolution. And I’m sure I’m not the only one to feel pride when more progressive thought is brought into an old institution.

Our younger generations must embrace the changes that face this world. Thus far, they have accepted the above progressions while also maintaining a religious perspective. It is the fundamentalists that worry me. People like Ken Ham, whose Creation Museum shows false representations of early life on Earth. A vegetarian velociraptor, anyone?

Recently, Ham’s “museum” wished to share airtime on the sequel to Carl Sagan’s magnum opus, the current “Cosmos: A Spacetime Odyssey,” to present their own factually impossible views of evolution as well as the beginnings of the universe. Neil deGrasse Tyson, an American astrophysicist, has since decided not to debate people like Ham.

Lest we not forget, there is still the threat of fanaticals in the Middle East. For the last thirteen years, many nations have been afraid of and fought the likes of Al Qaeda. But there is great hope, with brave men and women of the Islamic faith such as Malala Yousafzai, and the secularists Ibn Warraq and Ayaan Hirsi Ali.

I know that Cal State Northridge has a very sizeable religious community. As I do respect their presence at this great school, I wish for them to not follow the disturbed progenitors that preach of a vengeful, violent and hateful God. Stay on a path where you accept all those before you.

It is a lesson for all Americans, a statement with its very foundations in our early documents. If this specific statement (you already know it, I imagine) is to be self-evident, we ought to maintain our “brotherhood of man,” as John Lennon once so eloquently sang.

The death of Fred Phelps is a massive relief for all those who want equality in our ever-changing world. He was nothing but a decrepit weed in the cosmos, whose actions will be long forgotten. To paraphrase the late journalist Christopher Hitchens (who said the very same words about the late “reverend” Jerry Falwell), it is too bad there is not a hell for Phelps to go to.