Grab some grub on wheels with a sampling of food trucks 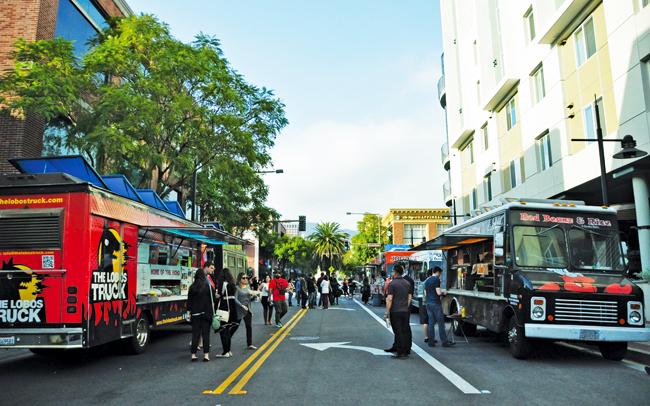 Food truck is a growing foodie trend. It’s becoming a luxury for people to try different tastes and a chance for businesses to stand out with their signature dishes. But not all trucks started out the same.

Grilled Cheese Truck was a concept that started from 7th Annual Grilled Cheese Invitational. It is well known for interesting grilled cheese combination like its popular sandwich, Cheesy Mac and Ribs, featuring macaroni and cheese with ribs. Now, it is a popular food chain trucks, at least eight trucks in Southern California and one truck in Texas.

Christopher Bautista first tasted beignets at New Orleans and decided to start one-of-a-kind truck, The Beignet Truck. Friends of Bautista happily joined the bandwagon, frying and selling beignets. Everyone share and rotate the tasks of taking orders, rolling the dough and frying the dough. To get out in the public, they attended private events and participated several food trucks events. There is no other truck like this and it started from one man’s dream.

Food truck allows the chefs to bring foods to the people. Slider Rider Truck owner, Duriel Porter, started as private caterer when a client told him to start a slider business. Porter decided to do food truck so he can share the foods outside of Orange County to Pasadena, Granada Hills and Los Angeles. It took him two years and $35,000 to get his truck up and running. He is planning another truck in San Francisco hopefully by 2015.

For all food trucks, many rely on public events and social media (Facebook, Twitter and Instagram) to promote their businesses. Everyone enjoy working in different environment, meeting people and bringing good quality foods.