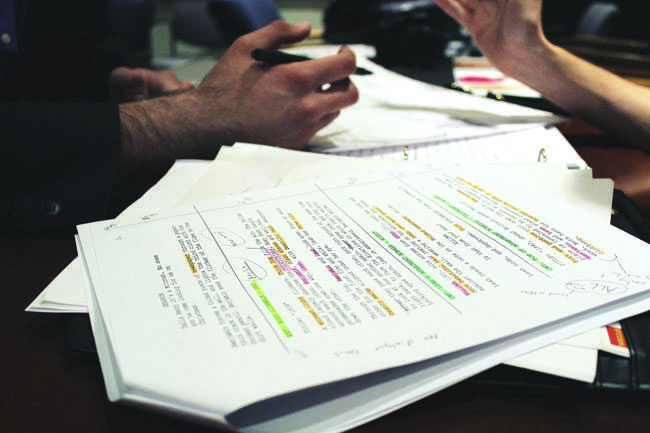 After waking up from a  dream, Michael Canon was inspired to embark on a journey to start writing his 11th film. Although Canon admitted his dream was scary, which he wasn’t comfortable elaborating on, it was the motivation he needed to begin writing a love story which takes place during the Holocaust.

“I am Jewish. I have always had this connection to the Holocaust. I don’t know what it is but always had a deep connection,” Canon said. “I feel I am allowed to do this. It feels like I should.”

Canon, a senior cinema and television arts major, has written a film called, “When a Flame Stands Still.” Before he started writing the story, he decided he needed to go to museums to do as much research as possible about the Holocaust.

Canon’s film follows the story of two individuals, more specifically, Orthodox Jews, who fall in love before the beginning of World War II. However when the war began, the couple became  separated by a brick wall while protecting themselves in bunkers.

Even though the characters are different from many of us, they have this universal value, Canon said.

What makes this film different from any other Holocaust film is that the love story consists of a practice, “Shomer Negiah,” which refrains a person from touching someone of the opposite sex.

“The film is largely about touch and how valuable touch is, so how do they communicate with each other?” Canon asked.

Canon wrote this film in hopes that it will be played in the senior showcase next spring. His film will be competing with 12 others, said Randy Kulina, senior cinema and television arts major, who is also one of the producers of the film.

The script, budget, and filming locations were proposed to film production Professor Nate Thomas and the entire film production faculty. Canon’s film was one of the four scripts picked from 25 to 30 student submissions.

Kulina said that though they are in the process of making the film, after its completion, they will submit it to see if it will be chosen to be played at the senior showcase.

“So the competition never really ends,” Canon said. They plan to show their film at festivals and museums, but are aiming at Jewish-based film festivals, the Sundance Film Festival and the Berlin Film Festival.

Though funding for the film has been an ongoing process, both Canon and Kulina are thankful for the efforts by film companies outside CSUN, and funding provided by Associated Students.

“We are trying to utilize all the talent that is already here (at) CSUN from the art department, theatre department and music department,” Kulina said.

The Hollywood Foreign Association Press awarded CSUN a grant which has also helped the the film department in funding their work.

Cannon also said the producers and photography director of the film received grants from Panavision and FotoKem.

Aside from writing their own proposals for grants, they have been organizing local fundraisers and have recently launched their own Indiegogo fundraising site which ends April 2.

Shooting and production for “When a Flame Stands Still,” will begin at the end of April. At this time, there are about 25 to 30 people who are working on the film. “By the end of the project there will be at least 50 to 60 hands that touch this film,” Kulina said.

Kulina said filming locations have already been chosen, which include a set in the Woodland Hills area, CBS studios, and a theatre in Long Beach.

“As producers we have to be able to make Mike’s vision a reality and doable with a budget we have,” Kulina said.

Attention to detail is important to both Canon and Kulina. With the film being a period piece, it is very important to remain accurate.

“Every detail is historically accurate. I have always been meticulous in my films but because it is a Holocaust film, it is a very delicate subject,” Canon said. “The amount of research I have done and I am still doing has been very extensive.”

Due to the lengthy research that is being conducted for the film, Canon has had to make several script changes. Included within his broad research, Canon has also interviewed several Holocaust survivors.

As far as the language is concerned, Canon and the producers hope to make the film in Yiddish, and even hired a Yiddish dialect coach to help the actors speak the language.

Though he has undergone the many stresses of creating a film, Canon said he is very grateful to have the opportunity to make a film set in the time of the Holocaust.

“There has been a moment where I felt discouraged… but no, I wouldn’t say discouraged, but there were moments where I almost reached that point,” Canon said. “But the passion tends to take over.”