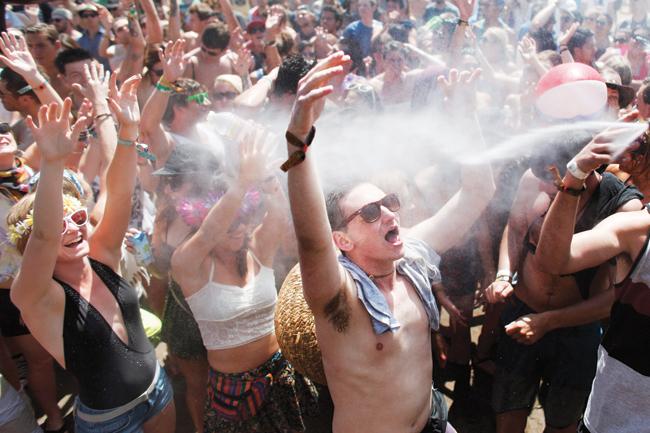 As bragging rights for scoring Coachella tickets are flying around faster than Indio’s tumbleweeds, so begins the preparation period for Southern California’s music festival season.

Of course, preparation involves the ritual setlist puzzle-solving to squeeze in as many shows as possible, and figuring out how many Nutri-Grain bars you can possibly fit in your clothes without getting caught (I’m assuming everyone, like me, smuggles in food and nothing else, correct?).

The other part of the preparation equation involves actually planning the allocation of supplies – sunscreen, sunglasses, fanny packs (both ironic and practical) — the list goes on.

Every festival website has a list of items that are allowed in the venue, as well as those that aren’t. Generally the lists of items are generic, and upon entering a festival itself, you find that leniency towards certain items is often extended. (I’m of course, again, speaking about bringing in your own food – seriously, festival food is far too expensive.)

Based on the do’s and don’ts of five festivals in the area — Coachella, Stagecoach, F*** Yeah Fest (FYF), United We Stand Fest, and Jazzfest West — there is considerable congruity in what attendees should bring, as well as what is not permitted altogether.

While most festivals have fairly transparent rules and regulations as far as weapons, drugs, and recording equipment go, the more subversive rules may come as a surprise altogether. Following are three items that are banned across the board, and perhaps for good reason.

1. No Pets – It may seem like a no-brainer, but listed on every festival’s site is the refusal of entry to pets. I don’t know about anyone else, but despite how big an Arcade Fire fan my dog is, I wouldn’t think of subjecting her to the intensity of a festival. Coachella, the ever-progressive festival that it is, tried to permit dogs a few years ago, but the brutal nature of the Coachella Valley as well as the festival itself proved too much for the poor canines, forcing organizers to revoke the rule.

2. No Instruments – Yet again another odd ruling. One would think that bringing personal instruments to a festival is completely redundant — isn’t the entire point of paying admission to a festival or concert to hear musicians play and not make a ruckus yourself? I’m sure some jam sessions could feasibly occur between sets, but I personally would worry about the integrity of my instrument in a crowd. Most sites specifically cited the omission of drums and electric guitars with amplifiers. However, I think if you’re committed enough to tote an amp to Stagecoach, you may as well bring it in.

3. No chain wallets – Yes, you read that correctly, no chain wallets. Apparently chain wallets are still a convention, and people are entirely misusing them. According a forum post for FYF, there had been a large problem with people whipping others with their chains during shows, inciting riots with chains and their subsequent wallets. Barbaric? Yes. Bummer? For those of us still riding high in 1997, yes.

Festival Essentials
When asked what preparation most festival-goers overlook, Coachella’s team suggested water containers.
“We can’t stress that commodity enough,” they said. “People can drop like flies in the heat, so bring a refillable bottle, bring a Camelback. We have refillable stations across the park and $2 bottled water if you are so inclined.”

Certainly some of the best advice comes from the experience of regular festival attendees. Liberal arts major Alejandro Davila, 20, has been an annual Coachella attendee since 2010.

“I would caution people to bring a sweater,” said Davila. “Even though the day can get extremely hot, it can be freezing at night. If people are traveling in large groups, bring something that can glow in the dark at night so you can better identify where everyone is. It makes the whole process much easier.”

If you are one of the lucky folks attending a festival this spring or summer, remember to stay hydrated, leave your pooch at home, and ditch your chain wallets altogether. Otherwise, have fun shamelessly singing along to Outkast’s “Ms. Jackson” – and don’t forget your granola bars.