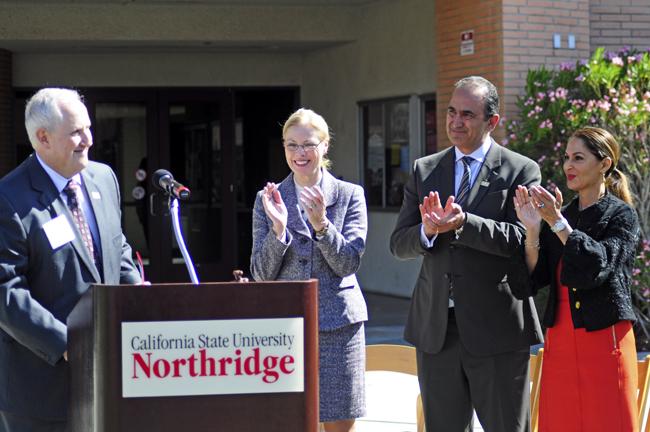 Kenneth Lord, Ph.D., left, the Dean, CSUN President Dianne F. Harrison, middle left, David Nazarian, middle right, with his wife, right, applaud as the ceremony has concluded. Nazarian has donated $10 million to the College of Business and Economics which CSUN has now named the college in dedication for his generous support at the naming ceremony on Thursday, March 27, 2014 in Cleary Court in front of Juniper Hall in Northridge, Calif. (Photo Credit: David J. Hawkins/PhotoEditor)

CSUN alumnus, David Nazarian, was commemorated at a ceremony held in front of the newly named David Nazarian College of Business and Economics, due to his generous $10 million donation on Thursday.

Following his recognition at the CSU Board of Trustees meeting on March 25 for the gift, the CSUN community, honoring the renaming of the college, welcomed the philanthropist and his wife, Angela.

“No matter how big or how small, opportunity is the lifeblood of personal evolution,” said Nazarian, who said that after graduating, CSUN opened many doors for him and he wishes to help students do the same.

Several faculty members and students attended the reception and afterward were able to speak with the couple, expressing their gratitude for the donation.

“Today is about welcoming David and Angela to our family. Today the rest of the world is hearing about this magnificent gift,” said Kenneth Lord, dean of the college, when presenting the couple.

Nazarian, who received his Bachelor’s degree in economics in 1982, has not only gifted his alma mater with the cash donation, but has also accepted to lead a campaign to raise an additional $15 million for the campus.

During the ceremony, Nazarian was presented with a miniature model of the Matador Statue located on campus. He was also recognized by the city of Los Angeles for his philanthropic work.

“On behalf of council member (Mitch) Englander, the mayor and the city of Los Angeles, I wanted to present you with this certificate to thank you very much for your generous donation,” said John Lee, Mitch Englander’s chief of staff.