Documentary shows the difficulties women face once they leave prison 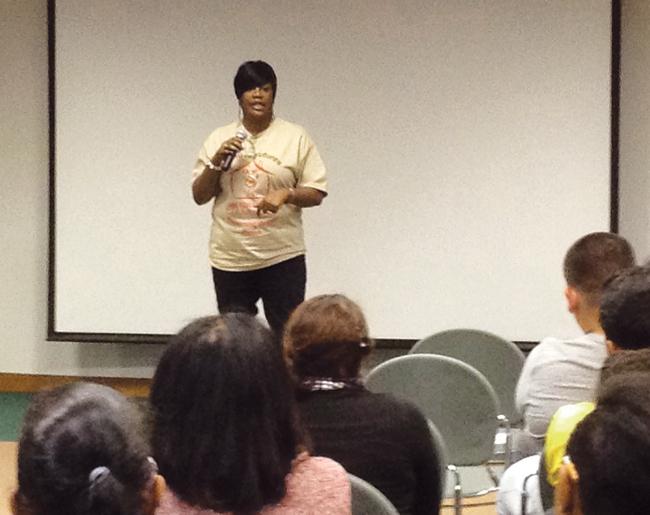 One of the advocates shown in the documentary, "When will the punishment end?" speaks to a crowd about how she helps women adjust to their new lives once they get out of prison.

Marta Lopez-Garza, Chicana/o studies and gender and women’s studies professor at CSUN, talked about some of the realities women encounter after leaving prison in her documentary “When Will the Punishment End?” on Wednesday.

The 60 minute film follows a group of women as they struggle to rebuild their lives after spending time in prison.
The film said those previously incarcerated have an 80 percent unemployment rate. This is of particular importance to a city like Los Angeles, which is home to about 3,500 to 40,000 women on parole.

“It’s shocking in that it puts a human face to everything I’ve been reading about,” said Skylar Grogan, gender and women’s studies major.

Two women featured in the film as advocates, Susan Burton and Kim Carter, attended the screening as guest speakers.
Burton is the founder and executive director of A New Way of Life Re-Entry Project in Los Angeles.

A drug and alcohol problem stemming from grief over the death of her 5-year-old son took Burton in and out of penitentiaries for over 20 years. She started the nonprofit in 1998 after getting sober in 1997.

“It’s just the same thing over and over and over again,” said Burton regarding prison recidivism.
Since its opening, A New Way of Life has helped over 700 women transition out of prison with housing, addiction counseling and legal services assistance.They have also reunited more than 150 mothers with their children.

“It really angered me the lack of services for a population that really needs it,” Burton said.
Carter is the founder and executive director of the Time for Change Foundation in San Bernadino.

She started Time for Change in 2002 in order to use her experience with starting over after prison to benefit newly released women.
“The fact that you have a felony conviction doesn’t mean you don’t want to live anymore,” Carter said in the film.
Time for Change offers low income families and individuals assistance through housing, job training and health services. In January 2014 they received the Community Benefits Honoree Award from Loma Linda University Health.

A similar event was held in 2010 with a screening of the film and a panel including Burton, Carter and two other women from the documentary.CSUN’s Chicano/a Studies and gender and women’s studies departments sponsored the free event which took place in the Jack and Florence Ferman Presentation Room of the Oviatt Library.