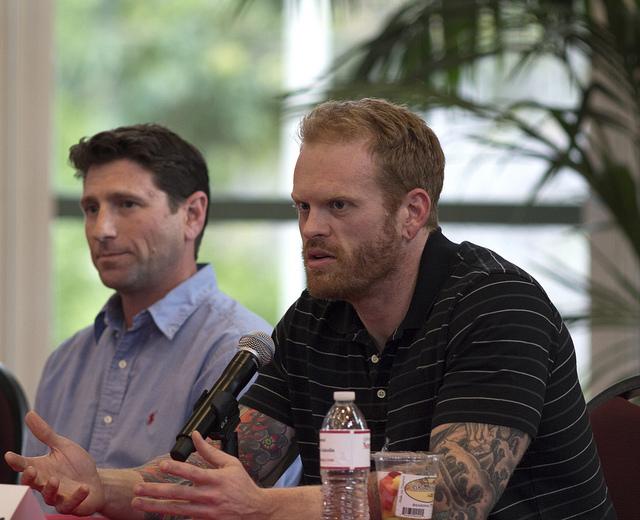 Dalan Musson, screenwriter for video games, features and television, spoke about what it's like working as a game tester, and gave advice on how to break out of the lower level jobs in the video game industry during the video game panel on March 26, 2014. Photo credit: Trevor Stamp / Daily Sundial

Two CSUN alumni spoke to a crowd of video game enthusiasts as part of a panel discussion about producing, designing and writing for the video game industry.

Along with their personal experiences in their respective fields of expertise being, visual art, production and screenwriting, the panelists emphasized the importance of having online portfolio, blog, or website that showcase both range and quality of work.

“If you are on the art side and you want to do developmental and concept art, your portfolio is you. That is your first contact with a producer or with a project. More than ever now, your online portfolio in whatever form, that’s going to be the starting point. Having that in shape is critical,” Martin said.

Martin graduated from CSUN in 1990 with a Bachelor’s degree in two-dimensional art. He currently works for Walt Disney Animation Studios.

According to Musson, video game screenwriter, writing for television and video games share many similarities.

“It’s the same across all mediums, they want someone who is going to work hard and on top of that no one wants to be the first person to give you a chance with something. They have to see that passion and that interest. People will respond to that,” Musson said.

In terms of the ever-changing technology in the game industry, Martin recommends that art students keep up with current tools for art, which include 3-D developmental software.

“In terms of project management software we have been incorporating Google docs because it’s live and more collaborative. There are a lot of companies including ours that use, JIRA for bug bases and bug tracking,” Pomegranate said.

Pomegranate graduated from CSUN in 2001 with a Bachelor’s degree in Multimedia Production/RTVF and currently works for WayForward Technologies, which is one of the top 50 game developers in the world.

Mary Schaffer of the Cinema and Television Arts Department moderated the question and answer portion.

“I found that the part about building your portfolio really helpful because it applies to the different types of sub-fields, not just production or design,” Warner said.

Schaffer also gave insight into a key component of the hiring process no matter the career field.

“I once hired a writer just based on his cover letter. It was the best cover letter I have ever read. When we called him in to interview my assistant said, just bring yourself,” Schaffer said.

Shantay Kotera, sophomore political science major, attended the event as she is deciding on whether she should focus her career towards law or video games.

“Breaking into the industry is a very important step. I am considering combining the two fields and do business law. The whole industry culture really caught my interest,” Kotera said.

The Entertainment Alumni Network President, Dan Rozzen, plans on hosting another event in April, which will include panelists from the entertainment industry.

The CSUN Entertainment Alumni Network and the Career Center organized the event and was free to all CSUN students.