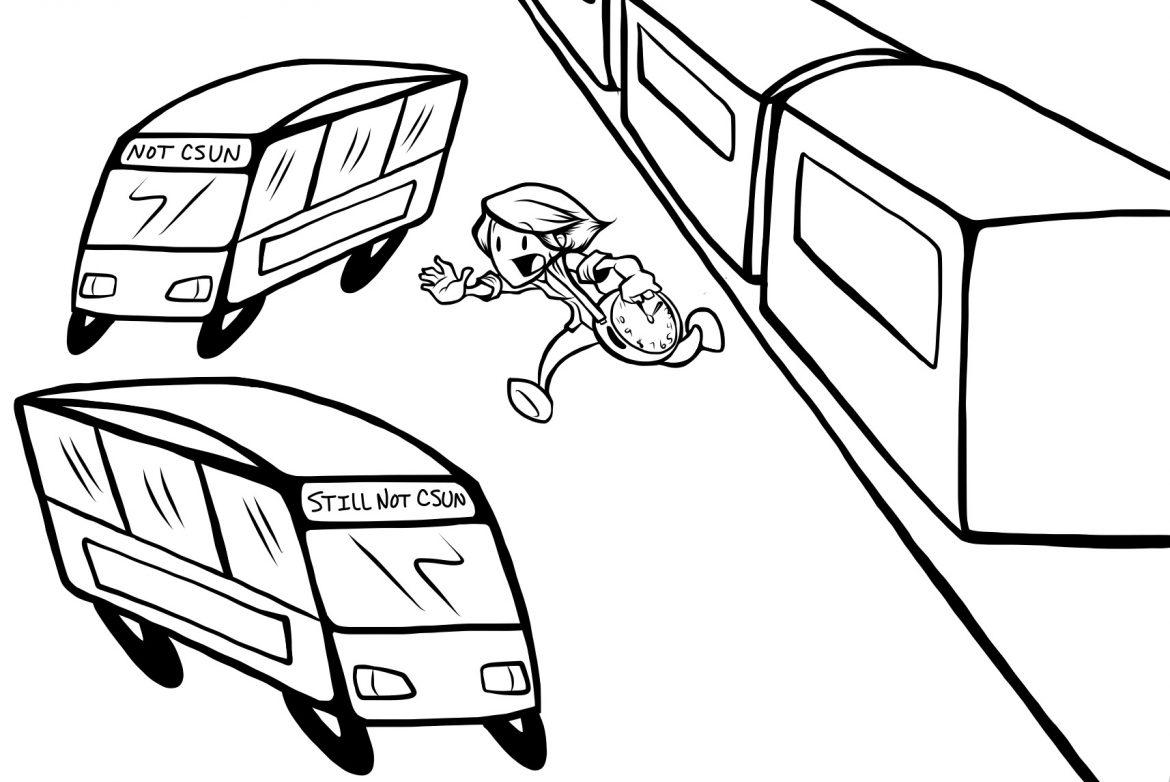 Correction: It costs $16 a month for a Metro reduced fare pass.

Commuting to CSUN is already a nightmare with congested parking and traffic almost everyday. But imagine what this commute is like for students who travel using public transportation.

In order for a student or any public transportation rider to commute from  Los Angeles to CSUN, they must take several separate buses and trains.  Trips could potentially take anywhere between an hour and half to 3 hours each way.

Of the dozen or so riders at the CSUN transit terminal on Vincennes Street and Darby Avenue I spoke to, over half have to make the three or four bus and train transfer journey.

One student I spoke with at the terminal said it takes her three buses and one train, and at times more than two and a half hours to get to CSUN from her apartment in North Hollywood. A trip which would be about a half hour drive by car.

There are some steps that CSUN is doing that will do  some justice for Metro riders. First, it’s quite helpful that students can receive a 30-day Metro pass from CSUN at a reduced rate of $15 a month. The bus terminal at Vincennes is also helpful, as now students don’t have to make the extra trek to a further bus stop. It localizes public transportation for our students by being in a more accessible part of campus.

However, the Metro ridership to campus would increase if an express bus operated between CSUN and the North Hollywood Red Line transit stop, with key stops on the way. This would at least allow many students to cut down on their travel time to and from campus and help reduce congestion as well.

But here’s the catch. It only runs during rush hour times and is relatively expensive for students. A trip from Northridge to Union station costs $7.50 with a student discount, and a monthly pass costs $192.75 according to Metrolink.

With tens of thousands of commuters traveling to CSUN, it is hard to believe that the Los Angeles Department of Transportation (LADOT) does not have direct service from LA to campus.

LADOT buses could be used to help commuters transport to and from CSUN if LA and our campus are serious about sustainability, congestion and reducing pollution.

Many public transit commuters are marginalized as they struggle to work, study and live during their five to six hour commute every day to and from CSUN.

“The big sticky wicket is funding from Los Angeles for Metro for better public transportation services,” said Astrid B. Logan, transportation coordinator for CSUN. “And they do not want to duplicate services.”

Logan said there had been plans to build a public transportation center stop at CSUN for about 20 years, as the last one was to be located on Zelzah Avenue but was cancelled due to local community opposition.

Logan said she could not make it to work on time at 8 a.m. while taking public transportation from the Mid-Wilshire District in L.A., which would have taken her at least three hours.

Logan has contacted LADOT to advocate for campus service, but she was told the same bureaucratic answer, that money was not present at the time.

However there are various groups on campus that are trying to improve conditions for commuters who use the Metro system.

The Institute for Sustainability at CSUN released a study led by Dr. Helen Cox in December 2010 indicating that about 74 percent of staff, faculty and students commute to CSUN in a single occupied vehicle and 33 percent of bus riders are dissatisfied with their means of transportation to campus.

The institute used GIS software to document where students commute from, providing a valuable tool for policy  analysis for public transportation advocates.

The Transit Coalition, a grassroots all-volunteer organization that works on improving all modes of transit options for Southern California residents, had an internship program on campus called the CSUN Transportation Tiger Team. The director for the Transit coalition, Bart Reed, has years of experience promoting mass transit solutions, and is currently working on ultimately bringing an express bus traveling from the Sylmar Metrolink Station to the CSUN campus.

A comprehensive study done in coordination with the urban studies department and the Transit Coalition has shown that thousands of students, workers, faculty and members of the local community could potentially utilize this route which would travel along Chatsworth Boulevard.

Reed said many people of color who use public transportation along the route would benefit and are often underrepresented politically. He suggests that what is needed to promote better public transportation “is middle-class riders getting active to help prod politicians to fulfill the need for better transit by using Twitter to create a buzz around the issue.”

All students should be advocating for better public transit to and from campus, even from a selfish perspective, because it would help open up more parking spots to fill.

With so many commuters coming to CSUN each day, an extension of the Red Line from North Hollywood to campus seems like an obvious plan. But until then students should not have to spend 5-6 hours each day commuting to and from a place of higher learning.