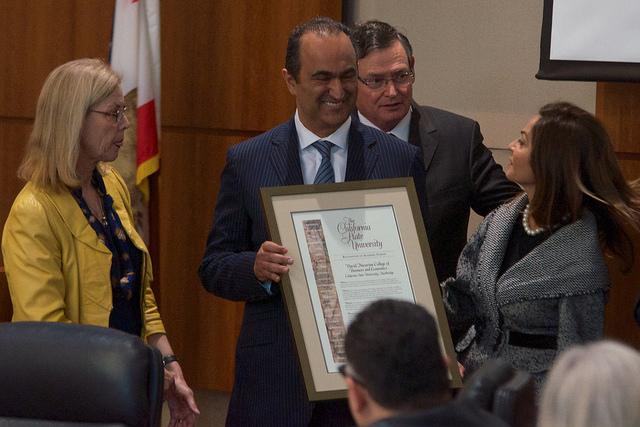 Plastered atop the University Student Union is the motto every matador should know.

Although there are years to wait for the feeling to sink in for incoming freshmen and graduating seniors, there is an alumnus who has truly demonstrated this to be fact.

“David’s story is truly a CSUN story,” said Dianne Harrison, president of CSUN. She expressed her gratitude to the alumnus, David Nazarian, who gifted a cash donation of $10 million to the campus.

The CEO of Nimes Capital, wireless communications specialist and renowned philanthropist, donated the funds to the newly named David Nazarian College of Business and Economics.

“CSUN was a good foundation for me and for my business,” said Nazarian, who graduated in 1982 with a bachelor’s degree in economics.

In an abundant blend of cultures and ethnicities, CSUN stands as one of the most diverse campuses in California, catering to more than 70 percent of students who identify as non-white, according to CSU demographics.

During the summer of 1977, Nazarian came to the United States to spend some time with his relatives, where he began to attend high school.

A year after the Iranian Revolution against the Shah began in 1978, Nazarian’s parents found refuge in the city of Los Angeles. Soon after, he joined his family and enrolled in Cal State Northridge.

From 1979 to 1982, Nazarian attended classes as a full time student, and found a job on the side. Although he was never able to participate in campus life because he spent his time working, he feels a sense of belonging.

“The friends that I made, the close relationship with professors, those are the ones that I felt were my community,” Nazarian said.

He never got a chance to be involved in clubs, but he stressed the importance of doing so.

“You can learn so much in classrooms, but when you are a part of the clubs you can see other students and learn from them,” Nazarian said. “It’s about always having students that share the same passion and help each other.”

Having no leisure time, Nazarian focused day in and day out on improving his academic standing, which landed him a stable job at the age of 21.

From then on, there was no turning back.

“I wanted to make sure that I could share that with the students so that they could have the same opportunities for themselves,” said Nazarian, who wishes for the funds donated to help those specifically in the college of business. “It was something that was on my mind for many, many years.”

Although in a suit and tie, Nazarian confessed that he wished it were otherwise, so that the students could feel confident enough to approach him.

“Hopefully, they allow me not to wear ties and jackets, so I can wear my jeans and t-shirts and just sit with people and have coffee, because at the end, I want to listen to students,” Nazarian said, who is hoping to return to the university often to interact with students.

“I hope as many kids come and talk to me, and hopefully I can add value, but more importantly, I want to hear their stories. I want to hear what they’re passionate about.”

The donor returned to CSUN last year to attend an event at the Valley Performing Arts Center. There, Kenneth Lord, chair of the college of business, encountered him.

Soon after, Harrison and the Nazarians, David and his wife, Angela, came to the agreement of the gift for the campus, which would head the campaign to garner a total of $25 million for the university.

Some areas in which he wants to see improvement are mentorship, internship, and study abroad programs, and the engagement of this university with others, across the globe.

But the main sections for which he wishes to see the funds allocated are for a few areas that are very close to him and his wife’s heart.

Nazarian and his wife stress the importance of female and minority empowerment, as well as the necessity to help startups and small businesses, claiming these to be one of the most important fields to invest in.

Recent studies show that more than 60 percent of CSUN graduates are female. However, the annual income is still less than their male counterparts, a study done by the National Center of Education Statistics shows.

“We want to make sure that all minorities and women have all the skill sets so they can become leaders and thrive,” Nazarian said.