Hip-hop is resistance against the inequalities in society 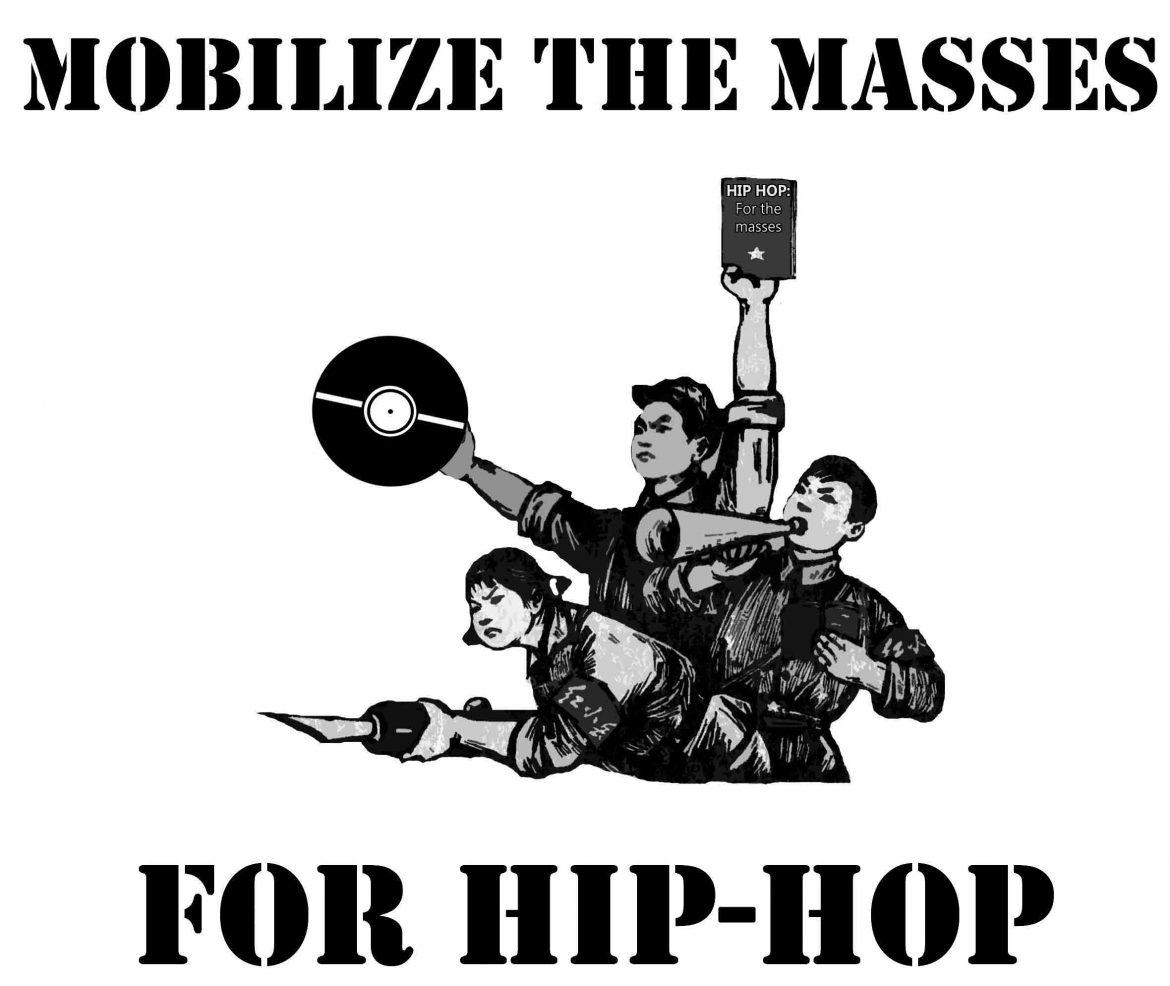 When I tell people that hip-hop can save the world, I am usually met with confused looks, blank stares or people rolling their eyes. But it’s true. Hip-hop can fight against racism, sexism and other injustices.

First step is to forget everything you think you may know about hip-hop. I want you to clear out all the top billboard hip-hop hits from your iPod. Delete all the Jay-Z, Eminem, YG (Check out YG’s “Hitta” music video and the blatant product placement of Avión tequila), Drake, Kid Ink, Tyga and all the other auto-tune, hyper-produced, overly-polished, consumerist, sexist, mindless, heartless, cultureless dance beats sold to you as hip-hop.

These claims are outrageous? Not exactly. Deconstructing mainstream hip-hop begins with understanding how hip-hop culture has been appropriated and turned from a force that challenged the status quo of traditional mainstream music into another product of capitalistic sedation.

It is no apparent surprise that hip-hop music and artists, like all celebrities, are used to mass market products. Check out 50 Cent and his ad for Vitamin Water. Or how about Kanye West and his endorsement of Ciroc? Not only that, P Diddy is actually Ciroc’s brand ambassador.

Jay-Z even went as far as creating his own brand of vodka, Armadale. Jay-Z’s marketing doesn’t stop with his vodka brand. Jay-Z has a song titled “Tom Ford” in his latest album, “Magna Carta Holy Grail.” Now that’s some blatant but smart advertising.

Essentially, hip-hop has been commodified. A culture that once challenged mainstream culture and capitalism became another cog in the machine.

Hip-hop artists using their status to market items is just the beginning. Artists themselves are perpetuating a culture of ignorance. Look at Nicki Minaj’s recent marketing scheme.

In order to sell her new single, Lookin’ Ass N*gga, Minaj decided to use a historic image of Malcolm X on the song’s art cover.

While some may argue that it’s not a big deal for Minaj to have pulled this stunt, it is quite offensive for those who understand the story behind Malcolm X’s picture. The image depicts Malcolm X looking out of a window while holding an assault rifle in his hand.

The history behind the iconic image was that Malcolm X and his family were in danger of being attacked because of numerous death threats. Malcolm X was in fear of his life; he was in danger because he was standing up for the right to self-determination of African-American.

And Minaj blatantly ripped off the picture as an unofficial single art cover. Adding insult to injury, the song itself has next to nothing to do with promoting awareness of the African-American struggle. The Malcolm X picture was just being used as a sad marketing device.

Hip-hop evolved from a counter-culture against a racist society to some monstrosity that is a slave to the machine of capitalism. But that’s why it is necessary to read on in order to understand why hip-hop can still be a weapon against this oppressive system.

The next step is to disregard everything that you have been told is hip-hop by Billboard, MTV, the radio, record labels and all tentacles of popular media. This step may take a while and cause major confusion.

To aid you, here is a quick media studies lesson: We are all media consumers, and our culture, values and pretty much entire reality is constructed and influenced by our dominant society. And what is our socioeconomic system based on, you ask? Capital. Profit. Money. Consumerism is the natural extension of that system.

When we listen to the radio (some people still do), watch movies, read the news, all of it comes from a business model. If they don’t sell papers, they sell ad space. CNN, like the LA Times, has to stay in business.

In journalism, you are told early on where the major funding comes from for mass media and what some of the most important goals are for mass media. One is to sell newspapers, get ratings, build subscriptions, gain followers and to sell ad space. In short, to make money.

And music—and by extension, hip-hop—is no different.

Hip-hop did not start with Snoop Dogg and Dr. Dre in the 1990s. Hip-hop began in the South Bronx in 1973 when DJ Kool Herc and his sister co-organized a birthday party and began spinning records. This was, arguably, the beginning of what would later be called the music and culture of hip-hop. Now, throughout the five Boroughs of New York, and in other places around the country, other people and groups were experimenting with mixing records, speaking over songs, usually during break beats or instrumental portions of the songs (which would later be known as rapping).

Hip-hop’s origins were a direct result of many socioeconomic factors during the harsh 1970s in urban, poor New York City, especially in immigrant African-American and Latino communities (there have been many articles written on the influence that Jamaican and West Indies immigrant culture contributed to the creation of hip-hop).

Hip-hop was born out of a lack of opportunities for poor black and brown young people. A reality of a lasting white supremacist legacy of shutting people of color out and of higher unemployment and incarceration rates. Hip-hop concretely gave these people opportunities of financial and cultural creativity.

If the corner market shop or the Manhattan office wasn’t going to hire you in a traditional 9-5 office setting, you as a struggling and entrepreneurial person of color, would create something new and utilize it for survival. And what DJ Kool Herc, Afrika Bambaataa, Grandmaster Flash and countless other pioneers of this new culture created was a way for people to make, enjoy and potentially financially survive off of throwing shows, playing gigs, selling records and becoming artists.

Critical scholar Robin D.G. Kelley studies the culture of hip-hop and has used the term of “play-labor” in describing how African-American and other youth of color use hip-hop as a means of entrepreneurship and survival.

“Play-labor” is defined as an unconventional way of making money. And that’s what hip-hop started off as. Marginalized people of color needed to survive under capitalism. African-American and other youth of color, within a postindustrial society, used the mechanism and culture of hip-hop as a means of entrepreneurship.

What appears as a way of emancipating oneself by making his or her play pay ironically ends up merely serving the overall profit-based system of capitalism. However since hip-hop was created in a capitalist society, it doesn’t come to much surprise that mainstream hip-hop has been commodified. What was created to survive and integrate in one system will only come around to serve the same system.

But since its creation, hip-hop has not just been about survival. It has been a culture of resistance.  Artists from the very beginning such as Melle Mel, Grandmaster Flash and the Furious Five, Run DMC, Public Enemy and X Clan have always focused on challenging the status quo and raising awareness on racism, mass incarceration and oftentimes capitalism itself as a devastating political economy.

Hip-hop as a form of cultural resistance continues till this very day with groups and individuals such as Lauryn Hill (Check out her music video “Consumerism”), Cihuatl Ce, Dead Prez, Lupe Fiasco, Blue Scholars, Lowkey and many others whose content range from much-needed reform to flat-out revolution.

Harlem-based rapper and activist Immortal Technique, who spoke at CSUN early in February at the Grand Salon to a standing-room-only crowd, has consistently created music that criticizes racist and oppressive US policies at home and abroad.

The late-great cultural theorist Stuart Hall spoke critically on the fluidity, the “constant transformation,” of culture. Hall often spoke on culture not being a static thing but something that exists in a state of constant change. Fast-forward 41 years later and much has changed in hip-hop since its birth, which is to be expected.

Remember when I said earlier that everything created in our society maintains the dominant culture of that society? Well, certainly hip-hop challenged the traditional way of doing business under capitalism but it most certainly did not dismantle it, or want to.

If we take a quick survey of the contemporary and most popular examples of hip-hop, one would be hard-pressed to find a song or video that has socially or politically conscious substance. But it is there. You just have to find it. Rappers like Boots Riley of The Coup and Jasiri X are not found on the radio or on television.

But they did find themselves at CSUN this past February as part of the CSUN Hip-Hop Think Tank’s “Bridging the Gaps: Hip-Hop in the Age of Mass Incarceration and Deportation” conference.

And it is precisely because of hip-hop’s ability to survive, to teach survival, to unite people, to give an expression for oppressed people, that it can be used as a culture of challenging oppression while raising consciousness.