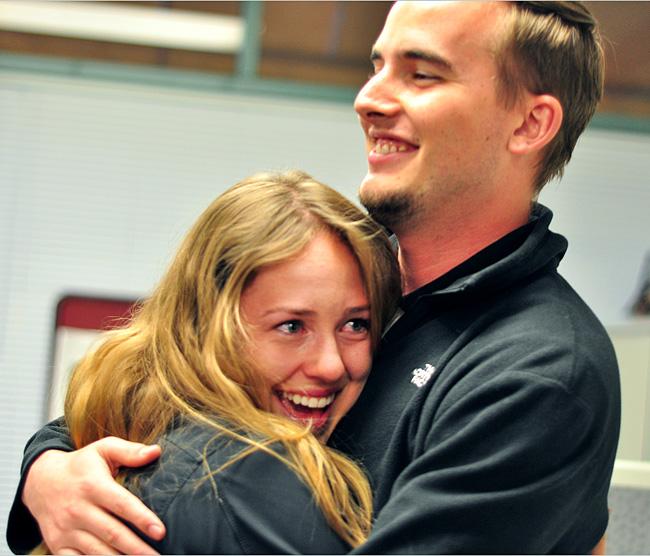 Tiffany Zaich celebrates her new position as AS president for 2014-2015 school year with the current AS president Christopher Woolett on Wednesday.

Tiffany Zaich and Talar Alexanian are elected Associated Students (AS) president and vice president for the 2014-2015 school year.

“I look forward to going to work with (current AS president) Chris (Woolett),” Zaich said. Among her goals for her presidency include establishing a farmers market on campus and increasing student jobs.

“I want to communicate and collaborate with students to make sure they’re aware of AS,” she said.

Zaich and Alexanian ran as part of the United We Thrive slate.

One of Zaich’s goals is to work on building a multipurpose center.

“I want to work on building more facilities for students and athletics because our student population is growing,” she said.

The voter turnout for AS elections was 12 percent with 4,195 students voting. This was increase from last year’s turnout which saw 10.6 percent voter turnout.

“I’m happy about the turnout and I’m looking forward to engaging students on important issues,” she said.

Zaich thanked all who voted and said she can’t wait to start work as soon as possible.

“I want to get out there and communicate with the students,” she said.

Zaich and Alexanian received more than twice the votes of their opponents. As part of the United We thrive slate they received 2602 votes.

The rest of the election results can be found on the AS website.