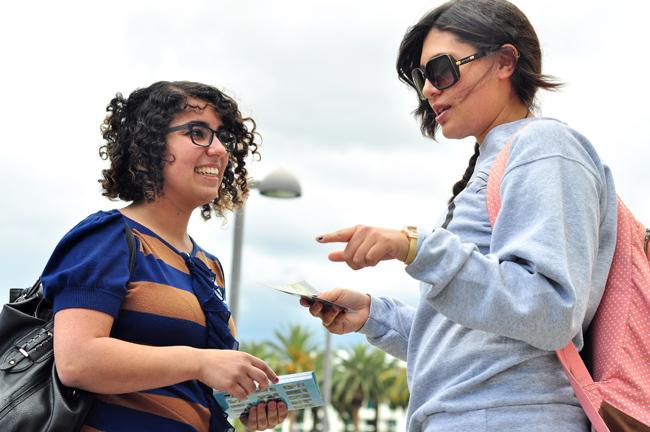 Talar Alexanian, journalism major, encourages Dayana Tobar, cell and molecular biology major to vote in the AS elections during the final hours of polling. Alexanian was re-elected AS vice president with Tiffany Zaich elected to AS president.

As voting for the AS elections concluded April 2 at 6 p.m, members have seen a dramatic increase in voter participation as a result of Tuesday’s Habit Burger truck giveaway and the transition to complete online voting.

Taylor Davis, sophomore communications major, said there was quite a noticeable difference in overall voter turnout as a result of the promotion.

“The Habit truck made students go crazy for voting this year,” Davis said. “I think that pushed students to get involved this year.”

With students being offered the free food incentive to cast their votes, Davis said yesterday’s turnout resulted in record-breaking number of votes.

“They’ve had more voters yesterday than they’ve ever had in the first day of voting,” Davis said.

Davis credited AS chair of elections Hannah Andrews for coming up with idea to galvanize greater participation in the elections.

“It was a lot heavier yesterday because we were giving away incentives,” Esquenazi said. “Already we’ve had more votes than last year.”

While AS understands many students turned out for the free food, Davis has noticed a greater curiosity among students in the candidates and issues.

“A lot of people come up to ask if we have the Habit truck, but a lot question who and what are they voting for,” Davis said.

Davis also credited the switch to online voting for increasing participation while also addressing the benefits of going paperless.

“We don’t use the paper ballots anymore because with technology these days, people want to vote online, which is why we’re voting here online at the polling stations,” Davis said. “It’s also economical, it saves money and it’s environmentally friendly.

Davis also noted that because of the great number of commuter students, online balloting is more convenient as opposed to waiting in line at a polling station.

While this year’s participation has been a rousing success, Esquenazi said A.S can do more to improve the election process.

While Davis agreed more could be done to raise awareness for the candidates and issues, she said the online transition could help towards spreading content.

“It’s hard to have more than one space where you can read about the candidate or issues, while also having it easily accessible to students,” he said.