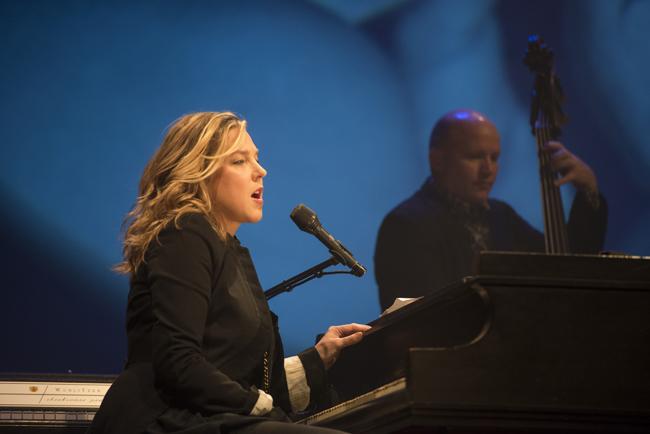 Witnessing Diana Krall perform live is analogous to witnessing Fitzgerald read passages from This Side of Paradise (or so I’m told) — you are beholding one of the great practitioners of their craft perform with undaunted ability. In Krall’s case, tickling the ivories is easily as impressive and evocative as Fitzgerald’s passages, but is anyone splitting hairs here?

The singer-songwriter’s performance at the Valley Performing Arts Center at California State University Northridge was nothing short of phenomenal. A set with an abundance of elegance, beauty and sheer musical expertise, Krall is one of the few artists to knock your socks off with technicality while simultaneously charming the crowd with such indelible charisma you wished you were her husband, Mr. Elvis Costello.

The stage was set in Vaudevillian décor, replete with stained glass, constellation-inspired props and lamps dimmed so low one wasn’t quite sure whom they were sitting next to. A player piano belted out raggy tunes and jazz standards while Betty Boop cartoons played on the screen behind the set. It was the perfect atmosphere for Krall’s impending set — an era not so long ago had been dutifully recreated.
The show began with a mysterious and eerie video of a ghastly figure (Steve Buscemi) floating about an ethereal set, crooning and pantomiming to Krall’s “When The Curtain Comes Down”. Krall and band covertly entered, taking the helm for the latter half of the song and utterly mystifying the audience. This mystification was not misplaced, and boy, it was brilliant.

Such was the nature of Krall’s set — leaving the audience in a superb yet confounding state that was all the while brilliant. The tone of Krall’s set could instantly transform from the gleeful jaunt of “There Ain’t No Sweet Man That’s Worth My Tears” to Tom Wait’s melancholy “Temptation”.
“Enjoy this one,” Krall would joke after a cheerier number. “The rest will make you miserable. It’s all downhill from here.”

Krall’s band exited after playing a handful of songs, leaving her alone on the player piano. Taking requests from a rowdy crowd, Krall pounded out “Peel Me A Grape”, “Glad Doll Rag”, and a Neil Young medley. Before she concluded her solo time on stage, Krall blazed through an amazing version of “I’m Gonna Sit Right Down and Write Myself a Letter,” a la Fats Waller.

The quality of Krall’s band was immaculate, each of the five gentlemen unique doyens of their trade. Perhaps most impressive was the multi-instrumentalist Howard Coward, whose versatility with knew no bounds. The entire band behind Krall was exceptional, a perfect compliment to her boundless talent.
Krall’s set concluded with covers of The Band’s “Ophelia” and Waits’ “The Heart of Saturday Night”. Let it be said that Krall’s ability to cover a song is likened to someone wrapping an original work in a shroud of Zeigfield’s finest follies and antiquing it flawlessly. Krall departed by setting the needle on an ancient gramophone player on stage and letting the haunting tune it emitted ring throughout the venue.

If I hadn’t been in love when I had sat down, I surely was by the time I stood up. Krall isn’t just a professional, she’s a song and dance virtuoso and among the most alluring performers today.