Pole dancing is left up for interpretation of the performers 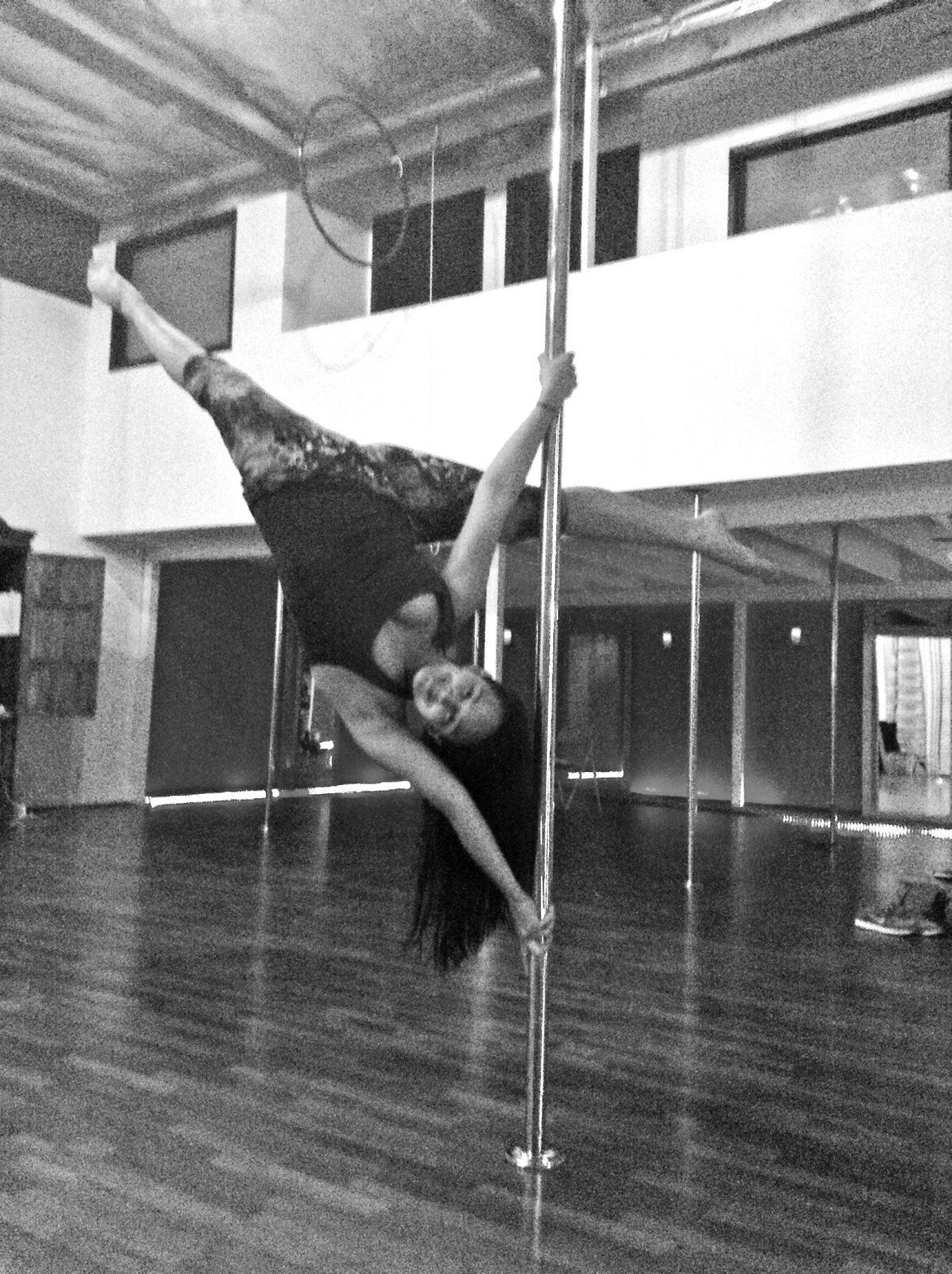 Nicolo Socola/Daily Sundial Sergia Louise Anderson, owner of The Vertitude, a pole dancing studio, shows off her talent with an aerial pose.

A stream of blue lights reflects across the mirrors in the dimmed studio perpetuating a Zen feel, similar to a yoga class. Stretching ensues for thirty-minutes, followed by the gradual progression into gritty aerial inversions, climbs and spins. Spotters are needed to help prevent injury in the event of a fall especially when dancers are practicing a new move. The negative stereotypes of pole dancing are shed and the movements weave into a strength-driven and emotionally charged dance.

This is just a glimpse into a typical pole dancing class where muscling through a series of gravity-defying techniques, applying the right amount of momentum and strength wields many of the same frustrations and injuries as any athletic pursuit.

“It feels like play, it feels like freedom,” explains Sergia Louise Anderson, owner of Canoga Park aerial and pole dancing studio, The Vertitude.

Pole dancing doesn’t require justification through pushing forward this notion of empowerment. It is empowering like any other athletic pursuit . Pole dancing encourages self-confidence, builds strength and ignites determination and endurance.

My point is not to brand pole dancing as feminist or non-feminist. I seek to spark a conversation and bring into perspective a side to pole dancing rarely considered. Given the controversy associated with this it is unavoidable to politicize and address the scruples concerning this topic.

There’s pole dancing where the language of movement embarks on a more tasteless tone triggering images of pot-bellied men flinging crumpled ones at the “girls.” And then there’s pole dancing: an athletic and artistic endeavor pulsing with warrior-like energy.

Anderson, a 2013 US National Pole Champion, defies the common misconceptions associated with pole dancers.  She trained in ballet since childhood, competed in salsa, ballroom dancing and has a degree in theatre from the New York University, all of which helped shape and influence her movement as a pole dancer. Yet even with this extensive dance repertoire, pole dancing proved to be the most challenging for her.

“When I found pole dancing, I felt like for the first time in my life instead of dancing to be the best and dancing for everyone else, I was dancing purely for me and it felt really nice to challenge myself,” Anderson explains.

“I use the pole to launch off of into contemporary movement,” Anderson continues. “To me the pole is like a set piece. It is a vertical bar, an apparatus in which I can take my movement as a choreographer from strictly on the floor, to aerially and on the floor, and back up and down. So for an artist, for a dancer and for a choreographer I think it’s a dream come true.”

Pacific Pole Championships 2014 bronze medalist Tiffany Wong, 25, praises pole dancing for allowing her to become more comfortable with her own body. What started out as a workout transformed into a form of therapy.

“If you’re patient and determined it will be an extremely rewarding activity whether you just dance for yourself, whether you compete or if you just want to get a good workout,” Wong said. “It’s a community I’m proud to be a part of.”

While some women regard pole dancing as a liberating expression of sexuality setting the stage for empowerment, others confine it to this mantra of male-dominated objectification. I see it as neither.

Gender and women’s studies professor, Marie Cartier, believes that a woman’s familiarity with feminism determines how pole dancing is executed and perceived.

“Pole dancing in and of itself can be an athletic artistic endeavor,” Cartier said. “However, I think that is much more likely to happen if somebody encounters pole dancing through the frame of already being a feminist, already being able to look at it and deliver a feminist way of being. If one has never encountered feminism before, the likelihood that pole dancing could serve to help objectify the person and not connect them to empowerment is very high. I think it depends on the person doing it, how they’re doing it and how their engaging in it.”

When discussing the negativity associated with pole dancing, Wong continues, “People have such different ways of interpreting it and I think that’s what makes it a lot more interesting,”

Although this negative interpretation will always be there to some degree, I wonder if pole dancing will ever be removed from this heavily layered criticism and arch its way into the raw ballet, the real artistic athletic expression that it deserves to be perceived as and has the potential to become.