Women’s Golf: Matadors in the hunt for first Big West title in 10 years 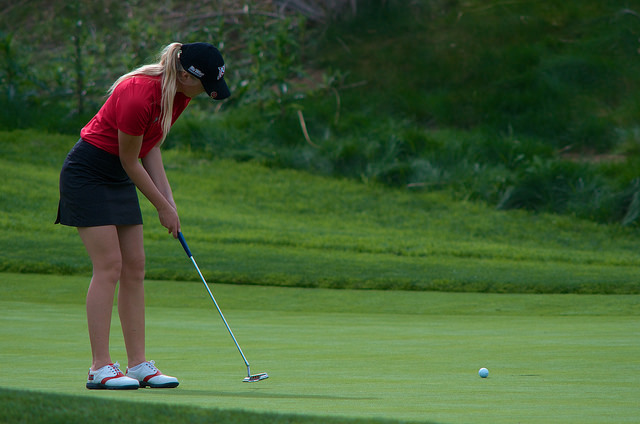 The Matadors are playing their best golf of the season at the right time, as they jumped out to second place after day one of the Big West Championship on Monday, at the San Luis Obispo Country Club.

Senior Clariss Guce and redshirt freshman Cesilie Hagen finished first and fifth, respectively, as they helped CSUN earn the second-lowest team score through the first two rounds of 603 strokes.  Guce stroked the lowest round of the tournament in round two with a 69, and finished day one with a tournament-low 143.  Hagen shot a 74 in both rounds to finish tied for fifth, with a total of 148.

CSUN earned the lowest score of the second round, hitting a combined 296 shots, one stroke better than the tournament-leading UC Davis Aggies.  However, the Aggies shot a 294 in Monday’s first round to give them a total of 591 strokes, 12 strokes ahead of CSUN for the lead.

Last season the Matadors finished fifth after the first day of play at the same course, but fell to seventh on day two and finally to last place on the third day.  CSUN won back-to-back Big West titles in 2003 and 2004, but have since finished third in 2008 and fifth in 2010 for their best finishes in the tournament in recent years.

Sophomore Arinda Bhanaraksa and freshman Ellen Brantberg finished tied for 19th, both stroking a ten-over par in the first two rounds, for a score of 156.  Junior Sharon Shin finished 34th on the day, stroking a 83 and 82 for a total of 165.

Should the Matadors rally and unseat the Aggies – who have won four consecutive Big West titles coming into the tournament – they will advance to the NCAA West Regionals in head coach Gina Umeck’s first year at the helm.