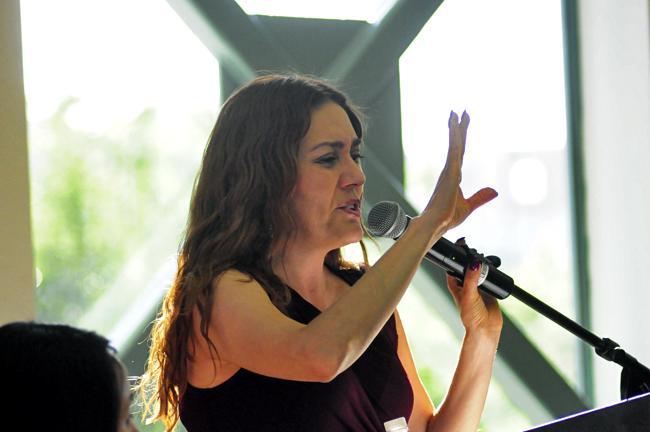 The CSUN Chicana/o studies department was established in 1969 to respond to the growing needs of a diverse student body. On Monday, they celebrated their 45th anniversary with a variety of speakers and presenters, which included professors, counselors, and community organizers.

The event took place from 9:30 a.m. until 5:30 p.m. in the Thousand Oaks room of the USU. There were five different sessions with different guests and topics so students and faculty came and went throughout the day.

“l came today not because it’s my major or anything, but because it is interesting to me,” said Tanya Garcia, 19, freshman majoring in kinesiology. ” I want to get more information on the subject and get more inspired. It is nice to have some classes that are more into my

“The accomplishment for the event was to really showcase the amazing and important work that faculty and students are doing,” Sandoval said.

The event kicked off with the guest speakers Denise Sandoval, Jorge Garcia, and Rodolfo F. Acuña all are faculty members in the Chicana/o department at CSUN. Sandoval and Garcia were both behind setting up and making the event possible. Founded during the Civil Rights Movement, the Chicana/o studies department offered various courses to reflect the history, politics, culture and language of the Chicana/o community.

The guests for the first session discussed their early history and reflected on how they came to be where they are today and how Chicana/o studies has influenced them.

“For the first time[Chicana/o studies] gave me a language to understand, my history, my community, but more importantly it gave me my cultural identity,” said Sandoval. ” When I took my first Chicano class I really embarked on a journey of my identity and there is where I discovered my passion for ethnic and Chicana/o studies.”

The event scheduled two faculty research panel discussions where presenters talked about the history of Chicana/o studies and the struggles they faced in order to start and continue these programs.

“When we organized this panel it was to give a real sense of the diversity of research our faculty is doing presently and this is just small sample because we have such a large department,” said Sandoval.

The event continued with the second session discussion being about interdisciplinary perspectives and liberating visions.

Yarma Velázquez Vargas had a presentation on media literacy and spoke about Latino characters on the TV show Sesame Street. She focused on talking about the representation of Latino/as on television. She showed the audience a small clip from the show only to point out that a lot of the facts about the Spanish language and history behind it was wrong.

“The differences between the countries do matter,” said Velázquez. “It is important because each country has political agendas that we need to address, but also because there is no such thing as a universal Spanish language.”

“By the media creating misrepresentation it produces and sets a limited conception of identity,” said Velázquez. She said that if speaking Spanish defines one as Latina/o it excludes other people in the US who do not speak the Spanish language. It turns Latina/os into a separate audience. “There is no need to address Latinos, Mexican-Americans, Puerto Ricans or any other group in the mainstream media.” She also added that it erases meaningful distinction between history and political movements of each group.

“I really liked hearing the panel speak their thoughts and when they brought up examples like pictures or clips of stuff it made more sense to me,” said Justin Ramos,19, sophomore undecided major. “The way they tie it into today and what is happening now makes me want to continue learning more about ethnic studies overall.”

The next session consisted of another panel discussion about research and communities. There was also one about what students can do with a Bachelors of Arts in Chicana/o studies. The panel had some alumni and an Extended Opportunity Program and Services (EOPS) counselor from Oxnard Community College.

The last session of the day had live music and food for the first half ending with the last discussion with the topic “Where do we build from here?”

“What I have learned is that we have to explore and we have to try and do new things and risk not being supported or failing,” said Ramón García. “In that we must do meaningful work that pays tribute to those who allow us to be here to do the work. They have opened this field up for us and I think it is our responsibility to keep it fresh, keep it alive and keep it critical or else we are going to deserve all those attacks and criticism that now we are not deserving.