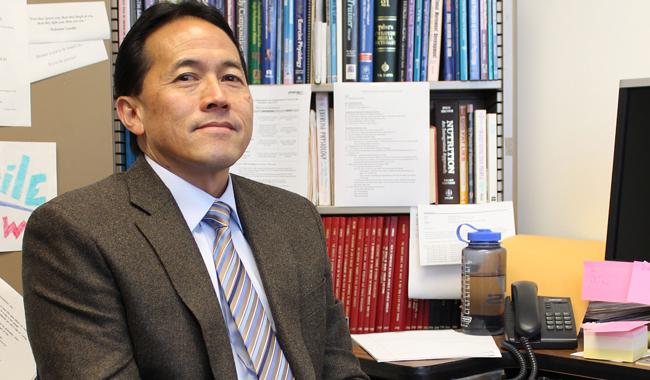 Kinesiology professor Steven Loy trained for months before the 2013 Boston Marathon, but nothing could prepare him for the catastrophic bombings that took place that day.

Loy and his daughter Mackenzie ran the Boston Marathon with her running team from Tuft University. The team only consisted of 100 people, including students, parents and staff.

But because Loy was also training for the LA marathon, he was not able to focus entirely on the Boston Marathon, leaving him feeling apprehensive about the run.

There to support him and his daughter was Loy’s wife Laura, his brother Gary, and his oldest daughter Stevy.

When Loy was between the 17 and 18-mile marker, known as Newton Hills, he was under the impression something was going on. He noticed more emergency vehicles than usual, but did not think much of it as it was normal to see paramedics treating heat exhaustion.

At the 21-mile marker, officials started moving the runners to the side. It was at this moment that Loy stopped running and heard rumors of an explosion by the finish line.

Along with the word of death floating around, a video caught on a cell phone was circulating which showed an explosion near the finish line where his family and Tuft University were assumed to be waiting.

“When it came seeing the videos and hearing of death I felt fear,” Loy said. “I feared that maybe my family was gone.”

Loy was distressed knowing his daughter was running ahead. He knew the pace Mackenzie was going and was trying to figure out where she was when the explosion happened.

It wasn’t until several hours later when a nearby woman was kind enough to lend Loy her phone that he was able to contact his family and let go of the fear.

Loy was relieved to discover that his brother and Stevy were okay and managed to stop Mackenzie from the race. However, he still knew nothing about his wife.

Tuft began bussing their members to a church where his brother and two daughters found him. Loy did not see his wife Laura until four to five hours after the bombings occurred. She had gotten lost in the city trying to avoid the site of the marathon.

Loy also has souvenirs from his trip to Boston and a medal for participating in the marathon but he has not looked at them since that day.

Stevy and Gary were affected most because they were across the street from the bombings. They both witnessed the horrific events of the day which they still haven’t spoken of.

Gary took photographs that day and has not looked over any of them, and Stevy had given her sweatshirt to a woman whose clothes were burned off from the explosion.

Loy’s family was angered by the news outlets that covered the marathon because the coverage was quite minimal compared to what really occurred.

“That’s not what I saw. It’s all sanitized,” Stevy said. “How do you have the news on and it’s not news?”

When the bomber was caught, the Loys felt relief but no closure.

Despite the wave of emotions and the tragic experience, Loy and his daughter are training to finish the Boston Marathon this upcoming April. The events of last year’s marathon have encouraged them.

“Going into Boston this year there is not so much fear just emotion,” Loy said. “(It’s) the combination of emotions of the events last year and the physical hell. I feel apprehension going into this year and I dont know how I will feel after mile two.”

The Tuft team, now naming themselves “Tuft 57,” is also bringing back the people who ran the marathon last year.

This time around, Loy and his daughter plan to have cell phones on them during the marathon in case they need to contact with one another.

“All I can hope is that everything is going to be great. At the end it will bring us closure,” Loy said.