Stoner selections: Regular show is perfect for an evening on the couch 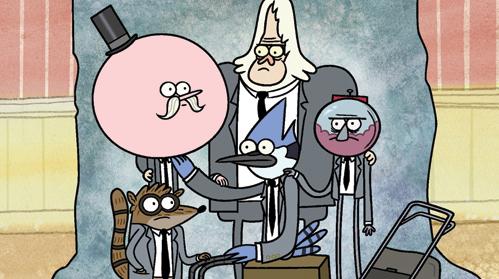 It’s about that time of year again, and I don’t mean spring. This year, the world-wide “holiday” known to all reefers and stoners as 4/20, falls on the Christian holiday of Easter Sunday. After properly observing and celebrating the resurrection of Jesus Christ, and maybe asking for forgiveness for the next “sin” you may be committing, here’s a few TV shows and films to get baked to this Easter Sunday.

Though Cartoon Network seems to be the mecca of stoner programing, one show in particular stands above the rest. The animated series, “Regular Show,” while rated amongst the likes of “Adventure Time” and “Robot Chicken,” is the ultimate stoner’s indulgence. The show follows the interesting lives of two best friends Mordecai, a blue jay, and Rigby, a raccoon who are both employees of a city park. Because of their stoner-like mentalities, along with their reluctance to tend to their jobs, Mordecai and Rigby are prone to supernatural misadventures that occur in every episode. Who knew neglecting your responsibilities could be so adventurous? Seasons one and two are available to stream on Netflix. Regular Show is on its fifth season and airs new episodes Mondays 7:30 p.m.

While it may be an oldie, it’s for sure a goodie. “Daria”, an animated series that was originally broadcasted on MTV in 1997, follows the life of an antisocial teen while taking a satirical jab at the lives of high school students, as well as criticizing social classes. After blazing some indica, this is a good show to delve into if you enjoy the mishaps of odd-girl-out teens. Daria is accompanied by her careless-yet-witty friend Jane, a cynical artist who also despises the high school experience. With interesting, quirky, spastic characters, “Daria” makes for a sarcastically relatable toktivity.

Adventure seems to be a common theme for those looking to occupy their high time. With that being said, “Pee-wee’s Big Adventure” takes the cake for all things stoner-appropriate. If you’re not yet acquainted, user or nonuser, Pee-wee is the way to go. Directed by Tim Burton, the film follows the adventures of Pee-wee as he embarks on a journey across the country to find his most prized possession, his missing bicycle. Along the way, Pee-wee has a few close calls with the scary ex-boyfriends of new acquaintances, ghosts of truck drivers, as well as a hilarious chase-scene throughout Warner Bros. Studios. Each whimsically whacky scenario is one to be greatly appreciated by any sativa-enthusiast.

For those looking for some mood-appropriate music, the Magical Mystery Tour featuring the Beatles is a must-see for the true stoner. The story follows the Beatles, portraying different characters who embark on a British mystery bus tour throughout England with a group of local natives. Ringo, Paul, John and George endure the outlandish events that occur throughout the bus tour, while performing some of their hits such as “She Loves You,” “All My Loving” and “Death Cab for Cutie.” With odd antics and great music, there’s no reason why anyone should ever pass up the opportunity to watch this film with a fully-packed bowl of their favorite strain.